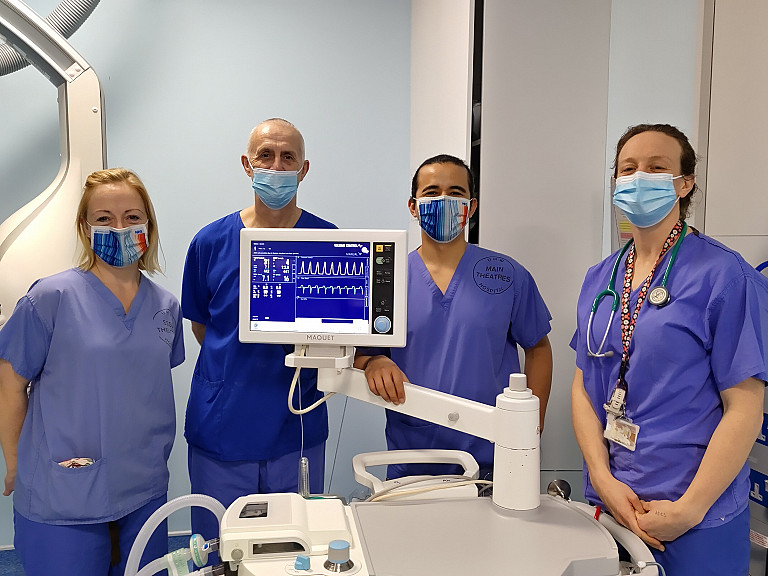 Members of the team with the anaesthetic machine 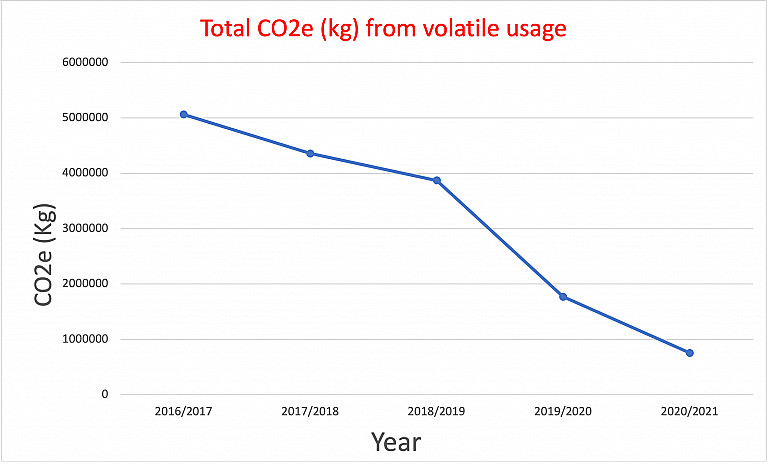 Anaesthetic gases are used every day in Wales in many surgical operations and, rather worryingly, account for about five per cent of the NHS’s CO2e (carbon dioxide equivalent) emissions.

To give a little perspective, one of the gases alone, desflurane, has a climate change impact that is more than 2,500 times worse than carbon dioxide itself.

We became increasingly mindful of the problem and saw a contradiction with the first rule of medicine - to ‘do no harm’. There is a very real argument that the long-term negative impact of our work in anaesthetics is harmful to both the planet and the world’s population.

This led us to launch Project Drawdown in September 2018 to educate healthcare staff about the environmental impact of the anaesthetic gases they were using in a bid to encourage a behaviour change.

Within our first year, eight hospitals from around Wales were on board with our thinking and had started to adopt environmentally conscious anaesthetic practices. Such was the response, that within twelve months of the initiative being launched, Wales saw a reduction of 71% in the carbon footprint from anaesthetic gases. This is the equivalent of over 2,500 flights from London to New York.

The response we received from the Welsh healthcare community inspired us to set up the first Sustainable Anaesthesia Innovation Conference in June 2019, and we used this as a springboard to launch the Welsh Anaesthetic Green Network (WAGN).

As a result of this coordinated approach, Cardiff and Vale UHB has seen its desflurane use drop by 95%, a CO2e saving of more than 87,000kg per month (an 86% drop in emissions) and a cost saving of around £80,000 each year.

This success has been replicated across Wales, with 15 out of the 18 acute Welsh hospitals engaged with reducing their emissions from anaesthetic agents. To date, there has been an 80% reduction in usage of desflurane across the sites that have supplied full data, which translates to a 72% reduction in CO2e emissions or a monthly CO2e saving of around 175,000kg (an equivalent amount is generated by flying between New York and London 1943 times).

As a result of our work, we have been recognised by the British Medical Journal and were finalists in the 2020 BMJ awards in the category of Environmental Sustainability and Climate Action Team of the year.

While we are incredibly proud of the work that our network has achieved, we also recognise this is just the low hanging fruit within anaesthesia and that there is much more to do before we meet that goal of a carbon neutral NHS by 2030.

Collaboration is key. Bringing people on board at an early stage is the only way you’ll gather momentum and get people on side. You will face some resistance when suggesting a culture change initiative, but by engaging early on you can certainly mitigate this.

Once you’ve got people on board, it’s the feedback that will keep them there. It might sound simple, but when you’re tied up with delivering the ‘now’, it’s easy to forget about your successes to date. Setting up regular project reports that feedback successes and challenges – and how you overcame these challenges – is crucial to keeping relevant groups engaged throughout the project.

Having measurable, quantifiable metrics certainly helps with this too. People need to see the tangible impact you are having. They need to understand the difference of ‘before and after’. The figures will speak for themselves and give context to both the problem and the solution. Tell them how much CO2e has been saved in terms they understand – such as the equivalent number of miles flown, or the amount of beef consumed.

We measure by looking at data provided by hospitals across Wales showing the amounts of different agents being used, the resulting CO2e emissions and associated costs.
Read more
Share this initiative
Inspired? Find out more

Reading Borough Council requires all new residential developments of 10+ homes to be built to zero carbon standards wherever possible. Zero carbon is an achievable standard that was intended to be a national requirement in UK building regulations.