Premier Taxis are on a mission to reduce the carbon emissions across the entire Fylde Coast by banning all diesel vehicles from the company and maintaining a fully electric and hybrid electric fleet. 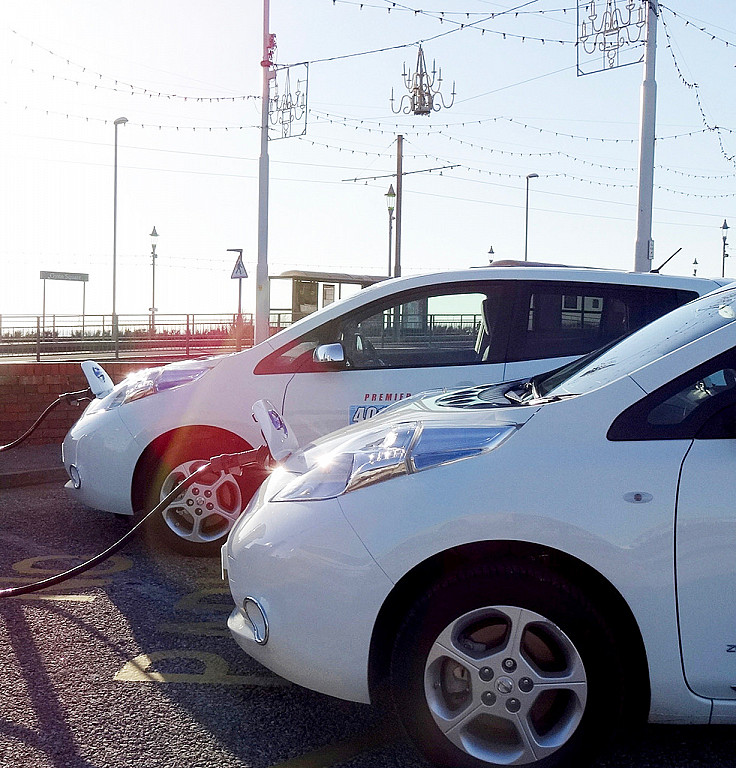 Our drivers enjoying a well earned rest at sunset while their cars charge.

Premier's electric vehicle journey started back in 2014. Managing director, John Cutler, was semi-retired and was keen to make a difference after working in the industry for 30 plus years. After researching which vehicles on the market would be viable as a taxi, he visited a local Nissan dealership to test drive one of their Nissan Leafs. At the time, there were very few resources available containing information about using fully electric vehicles as taxis, so it was important to get first-hand experience.

In 2015 Premier initially ordered fourteen 100% Electric Nissan Leafs. Due to the overwhelming success of the vehicles, customer and driver feedback, Premier took the decision to order more. To date Premier have now invested over £3,500,000 on Electric Vehicles and operate well over 100 Nissan Leafs and Nissan e-NV200 Minibuses. To compliment the Electric Taxi fleet Premier also operate the Fylde Coast's largest fleet of Hybrid Electric Vehicles split across the business in Blackpool and Lytham St Annes.

To date Premier's Electric Taxi fleet have completed over 13 Million Zero Emission miles. They believe Electric Vehicles are making a real difference to Blackpool by reducing harmful exhaust related emissions. Premier believe that we all have a responsibility to do what we can for the environment, no matter how small. It is estimated that operating an Electric Taxi fleet has saved Premier's drivers around £2 million on fuel alone, not to mention the dramatic reduction in cost of servicing and maintaining the vehicles.

Premier own and operate a network of charging stations at six locations throughout Blackpool for the exclusive use of Premier drivers. All electricity used to charge up the vehicles is from renewable energy sources.

In addition to Premier adopting vehicles with green credentials, their dispatch system is setup to reduce emissions also by using a feature called 'closest cab'. This queues jobs for drivers based on their final drop off point meaning the amount of combined miles traveled whilst empty is reduced, along with the overall miles a vehicle will travel in a year being less.

To show their commitment to the environment and greener travel, in September 2018 Premier banned the use of diesel vehicles on their fleets across Blackpool and Lytham St Annes to operate a fleet which is made up exclusively of Zero Emission and Hybrid Electric Vehicles.

In 2019 Premier won the Green Fleet Taxi Company of The Year Award, beating huge companies such as Addison Lee and Green Tomato Cars of London. In 2021, they won an International Green Apple Environment Award competing against over 500 nominations.

Throughout the global Covid-19 pandemic, Premier have continued to invest in an increasing number of new 100% electric and hybrid electric vehicles and their fleet is now larger than ever.

Extensive research into what vehicles were available on the market was carried out. Premier looked at price of the vehicle, running costs, maintenance costs, battery size, vehicle range, how the vehicles charged and the overall suitability of the vehicles being used as taxis.

Once the first 14 vehicles had been ordered, Premier progressed to applying for planning permission for their own private charging infrastructure of rapid chargers for the cars. This took around six months to get in place, along with arranging drawings for planning permission and numerous contractors to supply the electricity connections to the sites then supply and fit the chargers in place. Due to the relaxation in planning laws, planning permission is no longer required for chargers falling under a certain height.

Unfortunately at the time there was no funding available for this type of project so it was wholly self funded. It is still unclear to most as to what funding is available for electric vehicle chargers. The Government have a fund set aside for installing chargers in local authorities, but for the councils to apply for money from this fund, they need to match it, which most cannot. Therefore public charging infrastructures are almost non existent in our local area.

Looking back, Premier stated the only thing that they would have done differently is to install dual chargers which would charge by both Chademo and CCS, therefore future proofing the chargers for when the time came that another car manufacturer had a viable option that used the CCS connection.

The advice the taxi firm would give to anyone looking to embark on an electric adventure, is to speak to others within the industry. There have been numerous large companies across the country join the journey to electric over the past seven years and most are keen to share there experiences and encourage others to take the leap too!