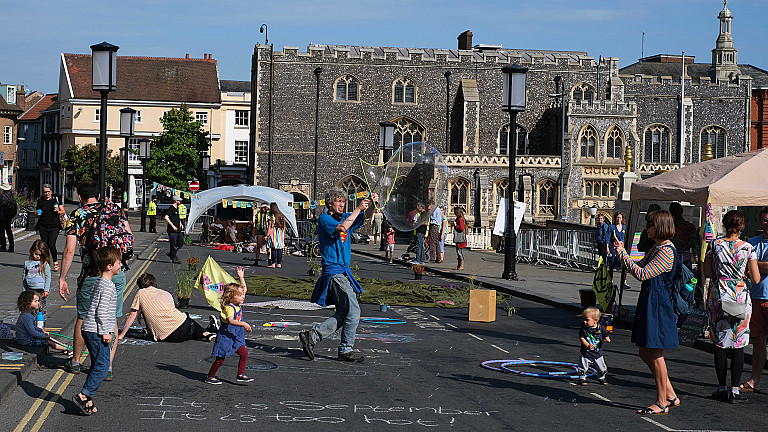 Norwich's size and topography means that it could easily be the most Active Travel-friendly city in the UK, with some of the cleanest air.

Like many British cities, Norwich was never designed for the motor car, yet now it dominates our environment - bringing with it polluted air, myriad health problems, a sedentary population, loss of public space, and fractured communities.

We started the "Car-Free Norwich" campaign group in 2018, to raise awareness of issues around air pollution, public space and childhood freedoms caused by the dominance of private car travel in our city's transport system.

We want to see private cars completely banned from the city centre (with some exceptions), and a dramatic reduction of car ownership in the residential areas.

We know that a lot of people feel they couldn't live without their car. It is no surprise that so many people depend on their cars, when our whole society has been shaped around the automobile since the mid 20th Century.

But wouldn't it be lovely to not need a car? To live in a city with cleaner air, where our children can safely walk, cycle, and play outside independently? Where our public transport system is so efficient, clean and cheap that it makes car ownership ridiculous?

Along with permanent improvements to our city, we're fighting for car-free days in Norwich.

These events - in which several busy roads in a city centre are closed to general traffic - are a brilliant way to show citizens how their city could be with vastly fewer cars: quieter, safer, and cleaner, and with more chances to connect with friends and neighbours.

Car-Free Days are sometimes criticized for being 'just one day', but research has shown that even short term disruption can lead to long term behaviour change, as in the case of strikes on the London Underground.

On 22 September 2019, Norwich had its first official Car-Free Day, to celebrate World Car-Free Day. 7 residential streets were closed for street parties (arranged by the residents themselves), while the local branch of Extinction Rebellion held a street party on St Peters' Street in the city centre.

We had some big news in 2020: the event has gone county-wide, and is now Norfolk Car-Free Day, with support from all district councils in the region. COVID-19 means this year's event won't be what it should be, but we are still hoping for lots of resident-led socially distanced street closures throughout our neighbourhoods, rekindling some of the amazing community spirit seen throughout lockdown.

One of the keys to our success was getting some councillors on board. We formally requested that Norwich City Council held an annual car-free day (via a public question). This initial proposition was denied, however we believe this opened the council up to the possibility. Approximately a year later a Green Party Councillor put forward a motion for Norwich to have an annual car-free day and this was approved unanimously.
There was a challenge for us around how confident the council were in their support for the day. Instead of celebrating Car-Free Day on World Car-Free Day (which is always 22 Sept) they suggested it was held on the nearest Sunday each year. This, we think, was to reduce the disruption to commuters etc, which was disappointing as only by disrupting many journeys will we have a chance at making enough people question their long term transport choices. We appreciate that it could be considered a bold step to prevent cars from driving in the city, but bold steps is what it will take to make a difference.
In addition to the date change, the council took the decision to not formally close any roads, and were reluctant to do any widespread promotion. We handled the promotion ourselves, distributing posters, and writing to larger organisations within the city centre. The council did help by removing the charge to close roads for street parties for the day, which meant that small events could happen in various places around the city as well as on the central road that we closed.
We worked with Extinction Rebellion to close one of the roads in the city centre (St Peters Street) without official permission. This was obviously a high-risk strategy but we felt it was necessary to prevent the day from being an irrelevance. Shortly before the event started we were informed that the police would not stop us from closing the road and so the day was allowed to turn into a lovely family-friendly party. Days after the event the council promised to do much more in future years, so it seems our plan paid off. Preferably this strategy wouldn't be necessary of course - a clearer motion in the first place (committing to close some city centre roads) would have helped but I'm not sure if we could have influenced that.
We have found it very easy to get press - presumably because it's such a controversial issue (especially in such a rural county). This has greatly helped to spread the word of our campaign. The campaign was started largely because its founder, Matt White, has a severe lung disease and wanted to fight for clean air - having such a personal connection to the issues has certainly worked in our favour and if another organisation was looking to implement something similar, having this sort of "real life" story is really valuable from a PR perspective.
It is important to remember that Car-Free Day is a tangible output from an ongoing campaign for longer-term reduction in car dependency in Norwich and the surrounding area. Car-Free Norwich aims to raise awareness about the many varied problems caused by car-dominance - we do this by sharing research and also encouraging our followers to write to their representatives and to respond to relevant consultations.

Number of roads closed.
Facebook event "attendees". The idea was that people would click 'going' as a way of pledging not to drive that day (even if they didn't attend a specific event).
Read more
Share this initiative
Inspired? Find out more