Leeds City Council encourages residents to switch to e-bikes for commuting to reduce emissions and congestion in the city centre and improve air quality, health and wellbeing. 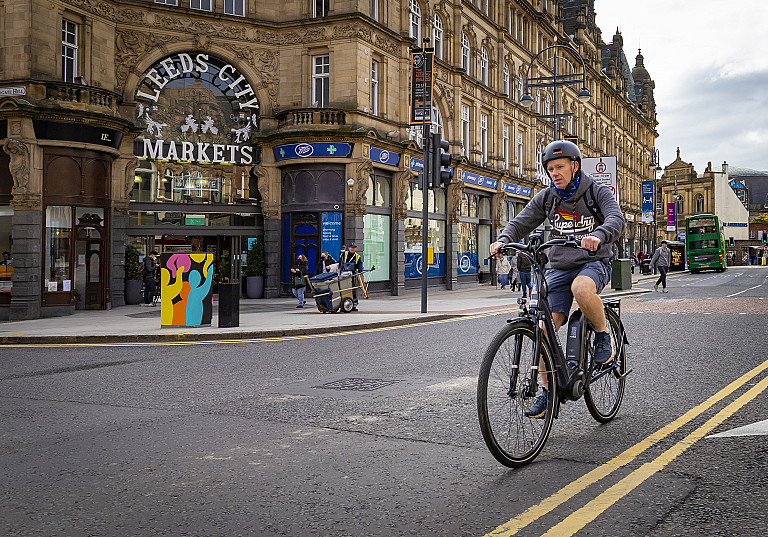 Leeds resident trials an e-bike in the city centre.

Electric bikes are accessible, easy to use and easy to charge. They can be cheaper and quicker for urban journeys than driving or using public transport.

By switching to an e-bike for commuting, residents can reduce their carbon footprint and help keep the city’s air clean—however most residents don't have any experience of or fully understand the benefits of this relatively novel technology.

To raise awareness of the benefits of electric bikes, Leeds City Council’s E-Bike Trials scheme gives commuters in the city the opportunity to borrow a fixed or folding electric cycle free of charge for up to 5 weeks.

The trials make a difference by directly replacing diesel and petrol car miles with zero emission mileage and also promote the uptake of cycling using an electric bike. After taking part, most participants report that they are likely to purchase an electric bike of their own.

The scheme has proven extremely popular, with 434 expressions of interest, so we would definitely recommend other LAs to run a similar scheme.

The scheme has a total of 22 bikes (17 fixed and five folding). We have found that the folding models are popular with participants whereas we could do with slightly fewer fixed frame. Therefore if another local authority were to replicate the scheme we’ve run here in Leeds we would suggest going for a more equal split between the fixed frame and folding models.

Sufficient resources and space are hugely important factors to running the scheme so ensure you have sufficient space to store the number of bikes you plan to take on in the scheme as there may be periods of time (i.e. annual services) when all bikes are needed to be stored at once. Also, it is really important to have someone on the ground in the team who is competent in bike maintenance/repairs as inevitably issues with the bikes (both big and small) will crop up throughout the trials. The trials in Leeds did have a resource such as this until recently and the impact of losing this resource is definitely being felt.

We would recommend your e-bike collection location being in the centre of town as of course this makes it easier for participants to use public transport to both collect and drop off their e-bike.

Each trial has a set start and end date however at the start of the scheme late returns of bikes were causing issues (wasting officer time and impacting on upcoming trials). We therefore added a clause to the customer’s rental agreement saying that each delayed return day would incur a £10 penalty charge. This greatly improved punctuality of returns so would suggest adding a clause such as this to any rental agreement.

Number of residents taking part in the trial.
Number of miles travelled on the e-bikes.
Read more
Share this initiative
Inspired? Find out more