Climania - the Climate Action Board Game

Using a board game to educate, engage and advocate for built environment climate adaptation and mitigation.

Climania is a free to print-and-play board game. 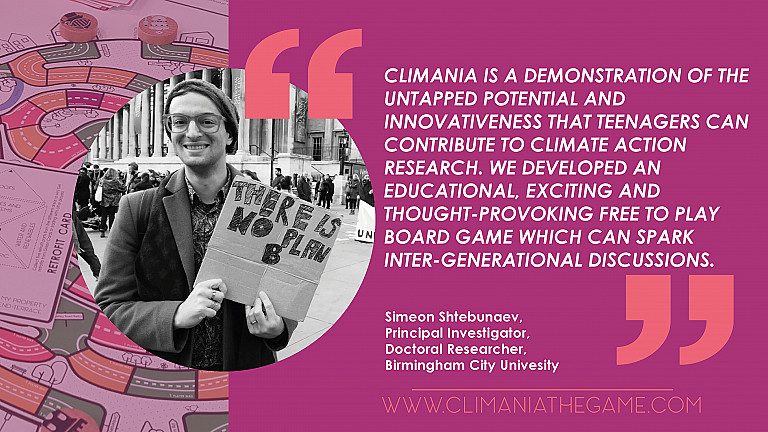 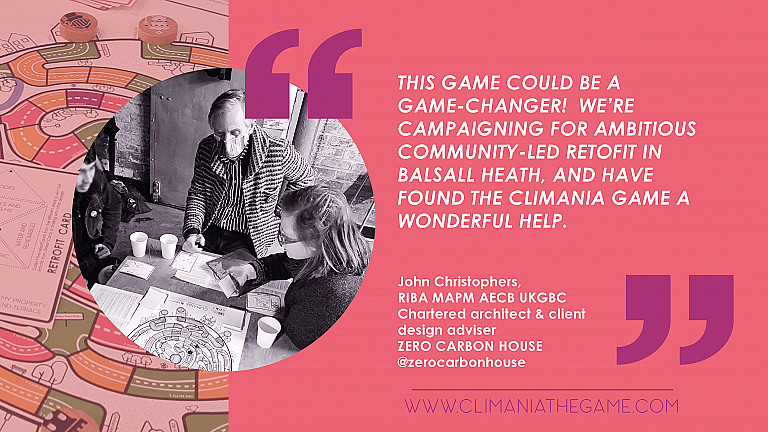 Climania is used by architects as policy advocacy tool.

The Climate Action Game project was a co-design and play research project concepted in light of COP26. We worked with thirteen young people aged 14-18 from Balsall Health, Birmingham, from November to December 2021 in a co-design process to develop a climate action board game. The project aimed to understand how aware young people are of the impact of the built environment on climate change. We developed an engagement tool in the form of a board game to inform people of the role of the built environment in the climate emergency – “Climania: The Climate Action Game” - focusing on urban planning and retrofit.

Climate action is a matter for all generations but especially critical for young people and future generations. It was therefore important to let young people co-create the ideas, focus, rules and name of the game. We recruited young people living or studying in Balsall Heath because this ward has a highly diverse demographic. The young researchers were reimbursed for their participation in the project with vouchers.

They were involved in nine workshops focusing on developing understanding of research, built environment specific terms and prototyping of games. In the duration of the project the young people developed skills in teamwork, academic writing, interviewing, data collection and arts-led methods in academic research. They worked alongside with university lecturers and artists as a co-lead on the project, having equal say in the development of the game. The young co-researchers consulted with architects, town planners and community members to build their knowledge and contribute to the development of the game. Their participation in the project was invaluable and contributed to the successful outcome.

The game files are free to play and governed by a Creative Licence.

Principal Investigator on the project was Simeon Shtebunaev, Doctoral Researcher and Lecturer at Birmingham City University, specialising in youth engagement in the built environment; co-design and participation in the planning of future cities; and cultural and arts-led research methods. Co-Investigator was Claudia Carter, Associate Professor and Reader in Environmental Governance at Birmingham City University, specialising in climate change research and holistic, participatory and creative approaches to environmental planning and management, including game design.

The main partner to the project was The GAP Arts Project, based in the Old Printworks in Balsall Heath. Ceri Townsend, Project Manager and Ella Marshall, Creative & Cultural Producer, provided the physical hub of artistic activity and support to run the workshops, as well as expertise in working with young people in creative ways. We worked with Scott McAulay from the Anthropocene Architecture School, RTPI West Midlands and Birmingham Architectural Association. The project is funded by the Arts and Humanities Research Council, part of UK Research and Innovation with Council reference AH/W004526/1.

“Climania: The Climate Action Game” is an engagement, educational and discussion tool aimed at informing the public of the role of the built environment in the climate emergency – specifically focusing on urban planning and retrofit. The findings of the research point to successful co-design research methods with young people, engagement techniques and serious play design as a means to disseminate complex climate research.

In our engagement we worked with 13 young people as co-leads on the project! During the game development they acted as researchers and interviewed more than 30 people from all ages in the community, asking them about their climate worries. We engaged 4 external professionals in our development of the game. In the testing of the game over two Community Events we engaged more than 50 people (majority under the age of 18).

Outside of the two community events we also demonstrated the game at informal and formal university events, museum events, engaged with families and worked with local climate action networks to test the game - overall, more than 40 people engaged in testing of the game outside of the funded events from the project. The game development was presented at the TET Dialogues event which engaged more than 50 people nationally working in the field of youth inclusion in built environment, which was invaluable input.

Number of CLIMANIA downloads.
Information collected on the game website (https://climaniathegame.com) about the experience of the gameplay.
Public questions that arise from CLIMANIA and gameplay.
Impact of the game on policy and education.
Read more
Share this initiative
Inspired? Find out more