Winsford Town Council has declared a climate emergency in the town and is working on a number of initiatives to assist in tackling climate change in the locality and beyond. 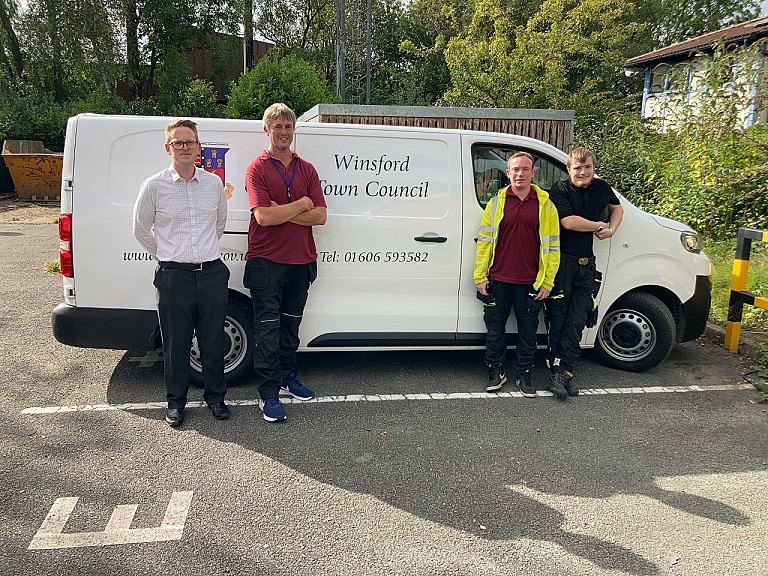 Winsford Town Council staff and the Town Mayor with the new van.

As said, Winsford Town Council recognised the position faced by all areas in terms of climate change and declared a climate emergency in the town. It followed this declaration up by developing a climate strategy for Winsford, which sets out the areas of focus for the Council's climate interventions.

In terms of its own operations, the Council recognises that it is a smaller organisation with a limited list of assets. These include a number of parks/open spaces in the town; ownership of the historic Brunner Guildhall; and also has a lease on a vehicle used for various reasons by the Council.

As a 'quick win', the Council felt that the replacement of its existing diesel van with an electric version was something which would reduce carbon emissions, but – perhaps most importantly – would also be a potential catalyst for other organisations and individuals in the town to follow suit and move to acquire electric vehicles for their own use.

As a result, the Council did consider a range of different options for a vehicle and did apply for funding from Cheshire West and Chester Council as part of its Climate Emergency Fund. This bid was unsuccessful but it did unearth some useful data (including the amount of CO2 to be saved by moving to an electric vehicle) and helped to focus Councillors' minds in terms of making decisions on this matter.

In the end, the Council decided to work with Drive Electric and now leases a Peugeot electric van, which works excellently for the Council and staff. The staff themselves have responded very positively to the introduction of the new van and the benefit for the whole town of the Council having an electric vehicle has been felt in terms of event management (where items have to be moved and transported) and also in terms of park management. The vehicle is quiet and is no longer polluting the air in the town.

It is envisaged that the new van is only one of the steps taken by the Council in relation to tackling climate change. The Council is also considering the use of solar panels in its parks, as well as environmentally friendly heating systems in its buildings.

The Town Council declared a climate emergency in Winsford in September 2019 and, on the back of this, the Council also developed a climate strategy for the town.

The above gave the Council a good basis for identifying initiatives and ideas designed to tackle the issue of climate change.

One such initiative identified by members related to the Council's only vehicle. The Council leases its vehicle and uses it to transport materials and items around the town and elsewhere; in getting staff to the various parks/open spaces owned and managed by the Council; and to assist in the holding of events such as Remembrance Sunday.

The Council's existing lease was due to expire in February 2021, so Councillors asked that – rather than replace the existing diesel vehicle with the same – the Council, recognising its role as a community leader and keen to set a good example to others, should look at an electric replacement.

As a result, extensive work was done in exploring the market to see what options were available and what the climate and financial advantages were for the Council.

In addition to looking at lease options, the Council did apply for funding from Cheshire West and Chester Council under their Climate Emergency Fund, but were unsuccessful. Despite this, putting an application together was an extremely helpful exercise as it allowed the Council to put a business case together to support the move towards an electric vehicle.

Following receipt of various quotes from different suppliers – including local suppliers – the Council selected Drive Electric as its preferred supplier as they were able to offer a suitable vehicle at an appropriate cost for the Council.

From this point onwards, the process was straightforward and the Council was able to take possession of the new electric vehicle in September 2021.

As an offshoot of this process, the Council was able to sell its existing diesel vehicle to a third party at a modest profit which was useful in terms of the constant financial challenges faced by all local authorities.

The message to other organisations keen to follow this route is to make sure that your strategic position is clear and that you are also clear as to why you are making this decision. You may also want to apply for outside funding – there is some available – which will help you form a business case for your plans. Finally, make sure that there are sufficient charging points in your locality.

Amount of money saved for the council.
Reduction in carbon emissions.
Read more
Share this initiative
Inspired? Find out more