Enjoy Waltham Forest is a wide-ranging programme of measures aimed at boosting walking and cycling in the area, implemented in deep consultation and collaboration with local residents. 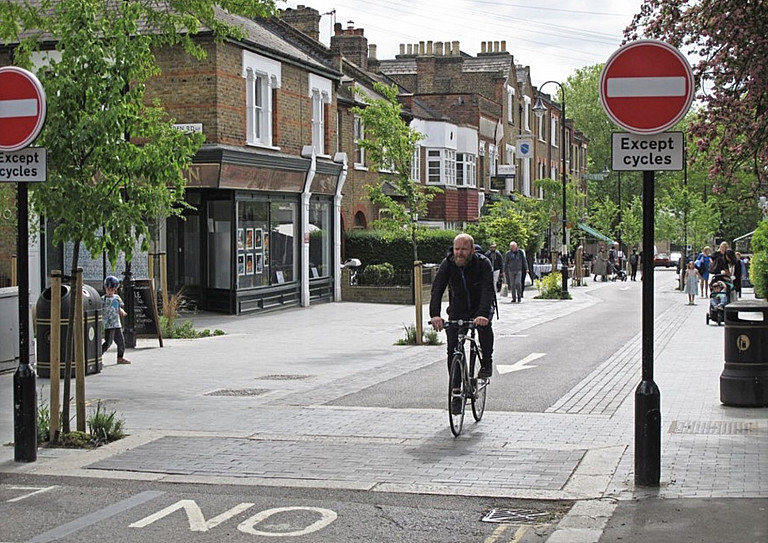 Some of the actions required to tackle climate change locally will involve people making changes to their lives, and some will be controversial. Councils need to engage residents and address their concerns if they are to successfully introduce the measures that are needed.

London Borough of Waltham Forest’s Enjoy Waltham Forest initiative features a wide range of measures aiming to boost walking and cycling in the area. The programme, which launched in 2014, intends to make Waltham Forest a better place to live creating health, social and economic benefits for local people.

However, many aspects of the initiative – such as the pedestrianisation of high streets and the use of blended crossings which are designed to slow traffic and emphasise pedestrian priority – have proved contentious among residents. In order to better understand public opinion and take decisions that reflect the needs of local people, the council carried out an extensive engagement and consultation process.

Following this, the council produced a detailed report mapping out resident concerns and aspirations. This formed the basis for the initial concept design process. Later, multiple in-person workshops and drop-in sessions gave people the chance to have practical discussions with the council. The in-person, participatory decision-making process centred on key exercises that were informative, inclusive and interactive.

First residents mapped out where they walked and cycled. Next residents were able to review an initial concept design and highlighted the changes they wanted. This allowed them to comment on key aspects of the plan such as modal filters, crossing points, traffic calming measures and improving streets for pedestrians and cyclists.

The third exercise allowed attendees to comment on public space improvements that they would like to see. Feedback here included the introduction of more trees, street art and small green spaces as well as improved lighting on busier streets. The council also carried out meetings with important stakeholders such as local residents’ associations and the emergency services.

The authority used the feedback of the perception survey and subsequent engagement workshops, as well as local traffic data, to produce a new preliminary design for active travel measures. These were subject to further public consultation, with 4,600 consultation documents handed to houses in the immediate areas where travel would be impacted for the Walthamstow Village scheme alone.

Councils considering similar action should commit to incorporating people’s voices into final design plans. This is important in ensuring the long-term sustainability of the decisions they are trying to make, whilst also serving to build-up trust with the local population in taking part in public decision-making processes.

Waltham Forest’s tips when consulting the public, are that councils should not set out binary ‘yes or no’ votes. Whilst sliding scales of approval should be used to provide residents the opportunity to voice a preference without the consultation developing into a perceived referendum. It can also prevent turning mild concerns into definitive opposition.

Political will is essential when incorporating public voices into key decision-making. Firstly, officers and councillors must understand the project and sincerely support it to ensure that concerns of locals can be discussed and solved through consultation, without giving in to critical voices as they arise.

Waltham Forest found that engaging local stakeholders, such as MPs, religious leaders, GPs and schools before reaching out to the wider public was important. This can ease any hesitations that residents may have about both being involved in public consultation and the project itself – by seeing that trusted local people and institutions are already involved.

Involving local people resulted in direct changes to project design and delivery. This included responding to strong support for road closures at some sites, including Aubrey Road, where 84% of locals were in favour of action; and taking out other modal filters including Rectory Road, where 59% were against.

This participatory approach meant that the council was able to implement well received measures that are less likely to be overturned in the future. Introducing powerful measures in harmony with local opinion has led to significant environmental impacts.

A King’s College London report found that new road layouts and segregated cycle lanes in Waltham Forest had reduced exposure to two health-damaging pollutants – nitrogen dioxide and PM2.5 – by 15-25% and 6-13% respectively. A University of Westminster study showed that these active travel policies mean that on average Waltham Forest residents are walking for 32 more minutes a week and cycling for an extra 9 minutes.
Read more
Share this initiative
Inspired? Find out more