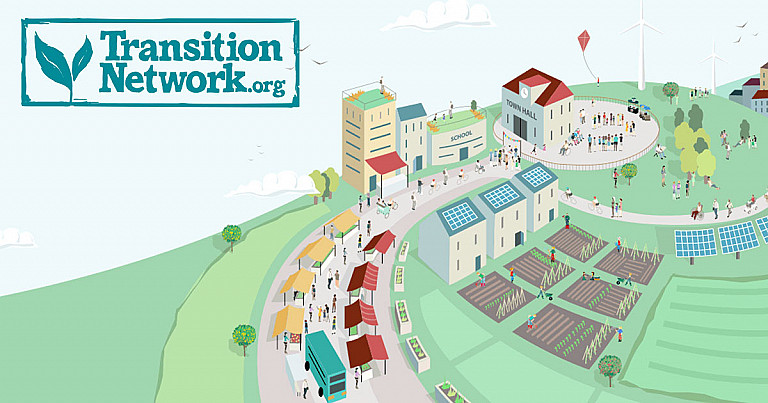 The Transition movement began in Totnes in 2006 and grew to thousands of people, initiatives and projects working in Transition across the world today. The impetus for Transition, and the growth in the movement, is the need to reduce our dependency on fossil fuels. Many of the projects and proposals explore different ways of doing that, and initiatives range in scale from neighbourhoods to villages and from towns to cities.

Transition Towns are made up of local communities that proactively reduce their dependence on fossil fuels and help mitigate climate change, by re-localising, shifting production closer to home and creating functioning communities. These towns aim to address the issues of peak oil, climate change and economic instability by creating strong, connected, self-sufficient communities. They are fuelled by the idea that strong neighbourhood networks will help their town to weather future energy shocks.

The hands-on approach taken combines practical responses to these big problems with fresh thinking and common sense. From garden sharing to solar panels, Transition Towns offer local people different points of entry into a sustainable lifestyle that isn't dependent on factors such as income or age.

In essence, the Transition Town model is based around communities learning to grow more of their own food, generate their own power, and even build their own homes using local materials.

An essential part of the Transition model is visioning: belief in a positive vision of the future and the work to make it real.

People are motivated to ‘do Transition’ for all sorts of reasons: to get to know their neighbours; feel like they are making a difference in the world; because the world’s huge challenges (climate change, social inequality, economic decline and so on) feel more manageable if addressed at a local scale; to catalyse all manner of new projects, enterprises and investment opportunities; learn new skills; or simply because they feel it is 'the right thing to do'.

In practice, Transition works by inviting people to take ownership of the process; by not claiming to have all the answers but encouraging creativity, and by building networks with other organisations. The movement is based on ‘project support’: the role of Transition is to catalyse and support, rather than to hold and manage a wide range of projects.

- Vision: clear definition of the future you want to co-create
- Healthy groups: working effectively with others
- Involvement: participation of different community groups
- Networks and partnerships: good collaboration with others
- Practical projects: inspiring others with what you do
- Reflect and celebrate: acknowledging the difference you’re making
Read more
Share this initiative
Inspired? Find out more