The Bee Network is a vision and plan under implementation for Greater Manchester to become the very first city region in the UK to have a fully joined up cycling and walking network, covering 1800 miles.

The city region shares common problems that are being felt across Britain — an obesity epidemic, air quality issues, and streets that are often clogged with motor traffic during peak hours. With congestion alone costing businesses in Greater Manchester £1.3 billion annually, we cannot afford to go on with business as usual. The evidence is clear that enabling residents to travel actively will lead to healthier, happier and more prosperous cities.

One of the keys to unlocking walking and cycling’s potential across Greater Manchester will be building major, fully segregated cycle ways on key routes; these must be safe, attractive spaces alongside high-quality footpaths.

Many local trips to schools, GP surgeries and shops could be made on existing quiet streets. At present, this is not possible due to most low-traffic, quiet areas being hemmed in by busier, intimidating roads. The Bee Network can unlock the potential of local roads and free up access for communities by providing easy crossing points, thereby unlocking opportunities to walk and cycle.

A good example is the CYCLOPS (‘cycle optimised’) junction in Chorlton – part of the four-mile long Chorlton Cycleway when fully completed – which is the first of its kind in the UK and enables cyclists to make a right hand turn without ever coming into traffic.

Useful learnings from The Bee Network

To ensure Greater Manchester’s cycling and walking infrastructure proposal was embraced by all ten local authorities, each authority took charge of creating their own plans.

To help ensure consistency across Greater Manchester’s network, a single identity has been applied across the ten local authorities. Synonymous with industry, and more recently with
unity, the design of The Bee Network uses the symbol of the worker bee and is crucial as a visual indicator of the wayfinding system.

To optimise the design of the network around humans rather than vehicles, the following 8 principles have been consistently applied:
1. Streets should be places where people choose to spend time socialising rather than just save time passing through.
2. Street design should focus on moving people rather than traffic.
3. Dedicated separate space should be provided for walking and for cycle traffic.
4. People should feel safe, relaxed and secure on the street and not just in a car.
5. People should feel like they can stroll without delay and linger without issue.
6. Protection and priority should be given to people cycling and walking at junctions.
7. Health benefits should be highlighted and quantified for all street improvements.
8. Walking, cycling and public transport should go hand-in-hand.

To encourage further engagement with local communities, share data on local air pollution and its reduction – as this impact benefits directly everyone who lives and works in the area – as well as research findings about safer active journeys to/from school and more active neighbourhoods. 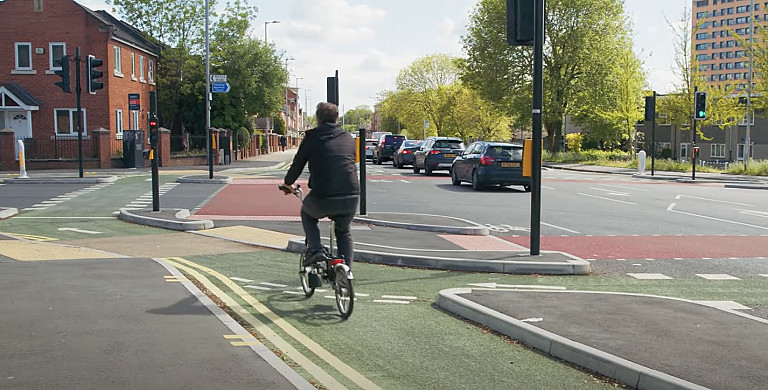