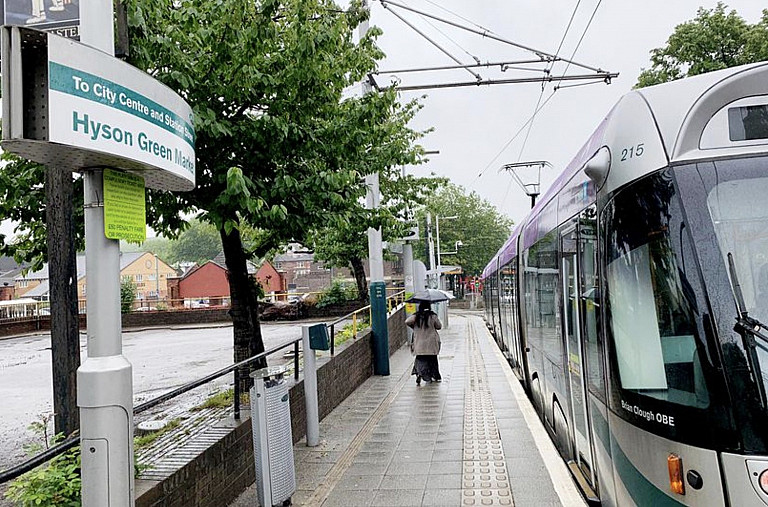 Over 32km of track make up Nottingham’s tram network and each of Nottingham’s trams carry the equivalent of nearly three double-decker buses or 170 cars, helping to keep the roads free of congestion.

Opened in 2004 and extended in 2015, it was designed to operate in the most congested transport corridors and has held car congestion levels to pre-tram investment levels. Trams are very environmentally friendly and, unlike rubber-tyred vehicles powered by internal combustion engines, do not pollute the atmosphere.

Around 20 million people use the Nottingham tram each year. The tram network covers all major employment sites, both Universities and Nottingham College as well as the main city attractions. 20 of the 30 largest employers in the city are within 800m of a tram stop, and over 5,000 free car parking spaces are available across seven park-and-ride sites.

The success of Nottingham’s tram reflects the way in which the system has been carefully integrated with other transport modes available in the city. Notable examples include the provision of very extensive park-and–ride facilities along the tram routes (which currently have the capacity to take in excess of 5,000 cars); bus services that act as feeders into the tram system; effective information systems giving users accurate information about tram availability; and the development of a smartcard that allows people to continue their journey on other forms of public transport.

The introduction of the Workplace Parking Levy (WPL) – a form of a pollution tax or congestion charge – on each parking place occupied by an employee, student or regular business visitor attending their place of work has also helped, encouraging commuters to switch to alternative modes of transport as well as funding transport improvements.

Stewardship of the tram project by a single project promoter – Nottingham City Council – facilitated careful preparation and management as well as providing clarity in relations with partner organisations. As a result, NET became the only tram service in the UK to be described as ‘an instant success’; whilst other tram schemes only gradually started to carry the passenger volumes anticipated, Nottingham’s tram exceeded the most optimistic predictions from the start.

The continued municipal stakeholding in Nottingham City Transport and the inclusion of the other major bus operator in the current tram consortium has strengthened the aims of integrated transport rather than the destructive deregulated bus competition which has plagued many other cities.