Kendal Climate Change Citizens Jury is creating a mandate against business as usual.

Kendal Town Council declared a Climate Emergency and its first action was to convene a Citizens Jury to answer the question: "What should Kendal do about climate change?". At Kendal Town Council we recognise that we are going to need to get all the help we can to be able to respond to the climate change emergency and that we all have a role to play. Now more than ever we need a plan for how Kendal can act. But it needs to be a plan guided by the people of Kendal. To do this we organised a Citizens’ Jury. Citizens’ Juries (or the slightly larger Citizens’ Assembly) have been run all over the world to help figure out what to do about big difficult problems. Lancaster City Council completed its own Climate Change People’s Jury, as have Leeds, Camden, Brent and Oxford.

An oversight panel was established to ensure the process was fair and unbiased. The represented organisations set commitments to consider and action the Jury’s recommendations.

A question was set which the Jury are to consider and discuss. Kendal’s Jury considered ‘What should Kendal do about climate Change?’. The jury was recruited via invites to randomly selected addresses within the area. Individuals from age 15 upwards were invited to join the jury. 20 people were selected who reflect the diversity of the wider population (in terms of age, gender, race, attitudes to climate change and geography).

Jury members attended a set amount of sessions to share ideas and opinions and to hear from a range of experts who they were able to question. A set of 27 recommendations was developed by the Jury and presented to the organisers for response and action.

The Jury made 27 recommendations and detailed how they could be achieved. Kendal Town Council are hosting a Recommendations Panel to oversee the development and delivery of the Citizen Jury recommendations in partnership with the organisations best placed to action them. In addition the Town Council is developing a number of projects to reduce carbon including allotment expansion, 20mph across the town, municipal composting, a town-wide solar audit and an online and town centre inspiration hub.

Organising the jury was a community effort.

There is funding out there to do this you just have to look for multiple sources. Like many town councils, resources are limited and funding had to be sourced from elsewhere. After a year of fundraising, grants were secured from Kendal Town Council, South Lakeland District Council and Cumbria County Council. Crowdfunding was also used to help seed the project and also develop a short film highlighting the Citizen’s Jury. Crowdfunding also added another level of local accountability as £6000 was raised by 181 local people and organisations.

Work with an organisation like Shared Futures, who have experience of Citizen’s Juries and Climate Assemblies. They can help guide the oversight panel to structure the sessions and provide guidance on how commentators should contribute e.g. not slipping into the use of jargon or acronyms.

Look to volunteers within your community to support the process. There is a huge amount of expertise and enthusiasm within your own community that can be harnessed. Four volunteer groups were formed including communications, creative, evaluation and information technology support.

The process benefitted from lockdown and moving online. We had access to key speakers via Zoom and we could record the presentations for anyone who wanted to learn more about climate challenges.

Number of participants in the Jury (20).
Number of recommendations made (27).
Number of projects to reduce carbon across Kendal.
Read more
Share this initiative 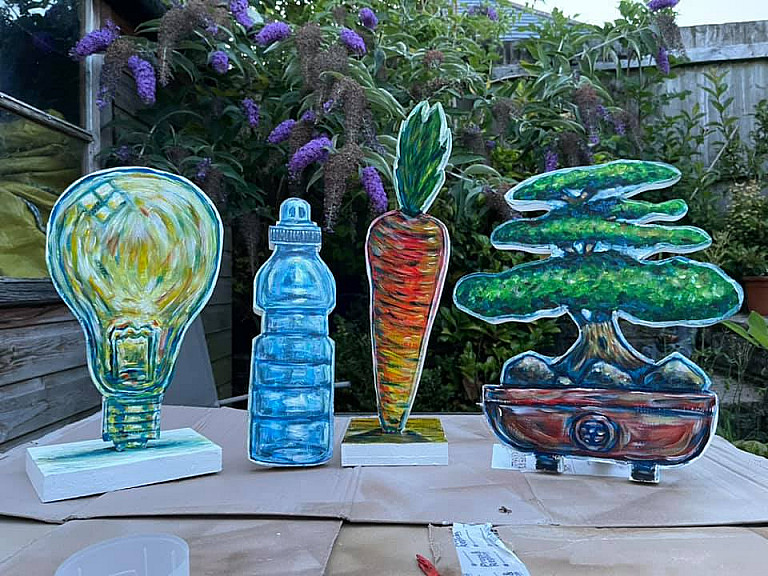 Mini representations of the recommendations to engage people at festivals. 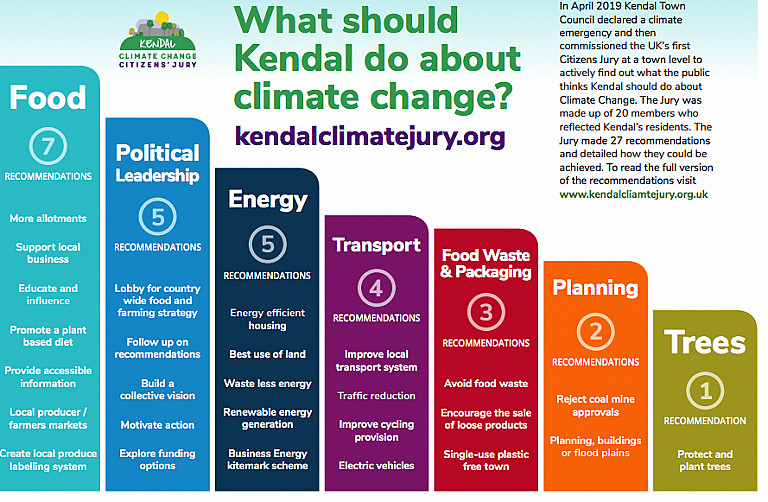 The 27 recommendations of the Jury organised by theme.
Inspired? Find out more