Pioneering engineers in Greater Manchester have helped develop a new graphene-enhanced product that will literally help us build back better and greener. Manchester’s Graphene Engineering Innovation Centre has helped develop a CO2-busting concrete.

Pioneering engineers in Greater Manchester have helped to develop a new graphene-enhanced concrete that will literally help us build back better.

The Graphene Engineering Innovation Centre (GEIC) at The University of Manchester and construction specialists Nationwide Engineering have developed a new graphene-enhanced product, Concretene.

Concretene is graphene-enhanced concrete that provides sustainability benefits by producing denser, stronger concrete. It allows for the removal of approximately 30% of the volume of material used and removal of all steel reinforcement from the floor slab, while achieving comparable or improved performance to standard concrete. This enables reductions both in carbon footprint and in cost.

What's concrete's problem? Production of cement for concrete in the building industry is one of the leading causes of global carbon dioxide emissions. Remarkably, if concrete were a country, it would be the third largest emitter in the world behind only China and the US, producing around 8% of global CO2 emissions.

The addition of tiny amounts of graphene - a so-called ‘2D material’ made of a single layer of carbon atoms - strengthens Concretene by around 30% compared to standard RC30 concrete, meaning significantly less is needed to achieve the equivalent structural performance.

“Concretene is a new endeavour working in partnership with the University; it’s very important we are based in Manchester, there’s nowhere better in the world to lead this research,” said Rob Hibberd, Director of Nationwide Engineering.

Tim Newns, CEO of MIDAS, Mancheser’s inward investment agency, said: “From a low-carbon, net-zero or environmental perspective, this product could be a real game changer.”

While James Baker, CEO of [email protected], added: “We will continue to collaborate with key stakeholders from across government and Greater Manchester on how graphene can support the sustainability challenge and move towards net-zero. This will lead to further exciting developments over the coming months, towards the acceleration of a key graphene application and in the creation of a supply chain based in Greater Manchester.”

“We are thrilled to have developed and constructed this game-changing, graphene-enhanced concrete on a real project,” said Alex McDermott, co-founder and managing director of Nationwide Engineering, who is also a civil engineering graduate from Manchester.

“Together with our partners at The University of Manchester’s Graphene Engineering Innovation Centre and structural engineers HBPW Consulting, we are rapidly evolving our knowledge and experience and are positioned for wider industry deployment through our construction frameworks, becoming the go-to company for graphene-enhanced concrete.”

Nationwide Engineering - co-founded by a University of Manchester graduate – has partnered with the advanced materials accelerator, Graphene Engineering Innovation Centre, to develop a graphene-enhanced concrete to make construction both greener and cheaper.

The development of a new, graphene-enhanced concrete was based around an integrated business-academic partnership. This team progressed down the Technology Readiness Levels (TRLs) by taking a phased approach and by quickly demonstrating and communicating success to attract new R&D investment to support the next stage of development.

Nationwide Engineering was originally backed by the GEIC-based Bridging the Gap programme, which aims to support SMEs with a base in Greater Manchester to adopt graphene technology.

Initial trials at lab scale in the GEIC showed significant improvement in compressive and tensile strength with small amounts of graphene oxide added to concrete.

This work led to Innovate UK funding to support larger scale pilot trials between Nationwide Engineering, GEIC and MACE (The University of Manchester's Department of Mechanical, Aerospace and Civil Engineering).

From this pioneering business-academic partnership, a new product was born: Concretene. From May 2021, the Concretene development team scaled-up from the pilot trials and successfully laid a number of slabs, including a gym floor, a ‘living lab’ outside the GEIC and a planned pour at the Mayfield urban development in central Manchester.

From these real life applications, Concretene has demonstrated clear advantages. This graphene-enhanced concrete can be produced and applied using conventional equipment and labour. The team used 30% less material for comparable performance to a standard RC30 concrete and removed all steel reinforcement, further reducing associated costs and emissions. 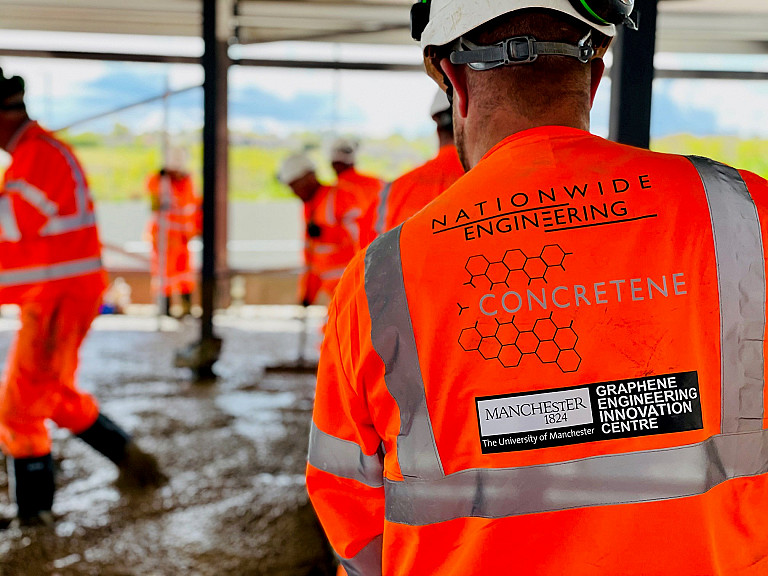 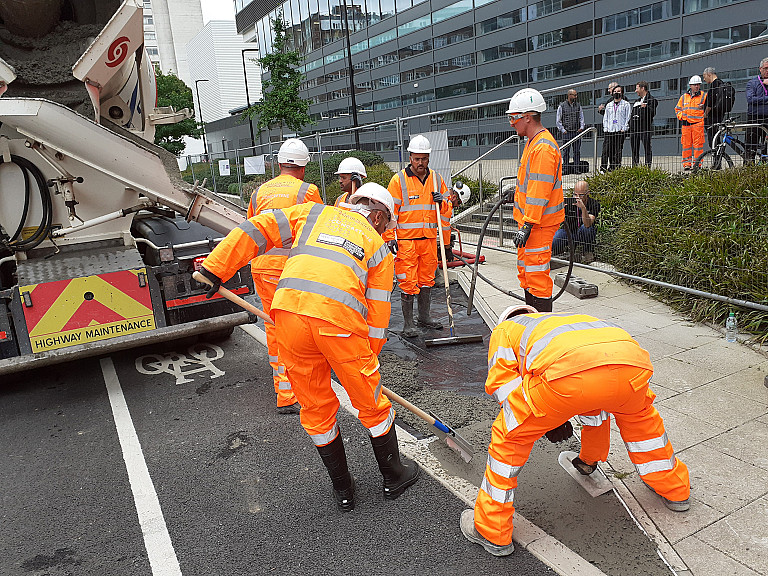 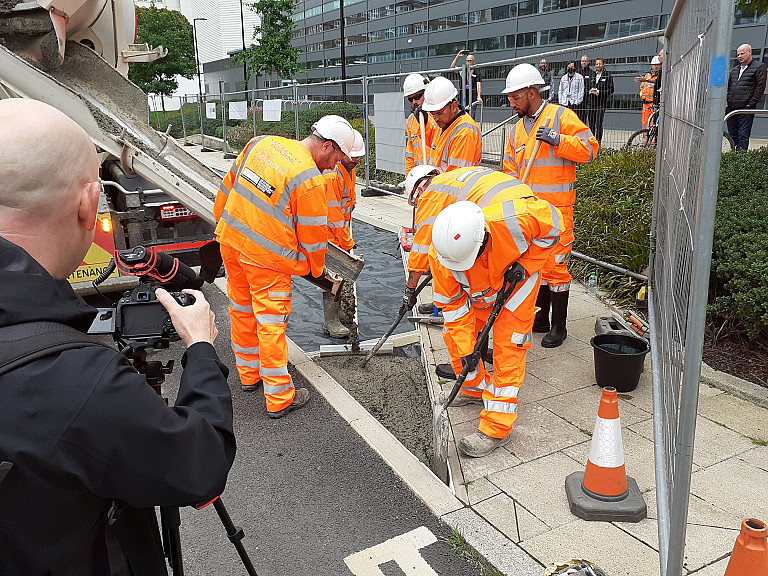