A partnership approach has delivered a natural solution to tackle a localised flooding problem spot in Salford, in turn creating a welcome green space for the community to enjoy.

New swales and wetland on site. 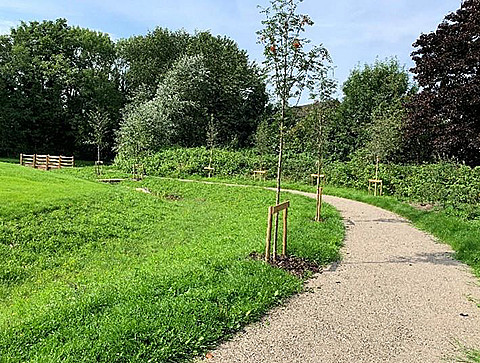 Following heavy rainfall, localised surface water flooding and pollution risk had become a recurring issue near to the junction of Folly Lane and Dales Brow, a highway running alongside a green space of the same name in Swinton, Greater Manchester.

Local sewers became overwhelmed, leading to a standing pool of water on the highway and creating the potential for sewers to overflow and release pollutants into the natural water course.

Co-investment in a Sustainable Drainage System (SuDS) scheme between the Environment Agency, Salford City Council, United Utilities and City of Trees has shown how natural solutions can address such an issue, while also providing an enhanced green space for local people to enjoy and creating a new habitat for wildlife.

Dales Brow was transformed with the installation of two bio-swales (sunken, marshy channels), the creation of a new 64sqm wetland area, a 40m long beech hedge as well as hundreds of new plants and trees.

Rainwater running off the road is now diverted away from the sewers into the swales. In heavy rainfall events the rainwater will travel along the swales and into a temporary wetland area.

When the swales and wetland area are full, the water will overflow back into the local natural water course via a pipe connection in a clean and safe condition.

The swales and the wetland area contain a variety of vegetation types able to cope with wet conditions. Microbes in the soil and vegetation trap and help to break down any pollutants into harmless compounds.

The project has a number of benefits; not only helping to reduce surface water flooding at a local level but it also eases pressure on the sewer infrastructure as well as providing costs savings with respect to water treatment and reducing the likelihood of pollution incidents in watercourses from overflowing sewers.

As well as the nature-based interventions, other measures include a new footpath, tree planting and the creation of low maintenance ‘biodiverse’ planting areas ensuring the space can benefit both local people and the planet.

Students from The University of Salford will monitor the quantity and quality of surface water entering and exiting the site to determine the amount of water diverted away from the combined sewer and the ability of the SuDS features to remove vehicle-based pollutants.

This transformed wetland site now enhances biodiversity and provides a high-quality recreation space, which creates an attractive area for people to live and encourages inward investment. The site provides climate change adaptation benefits at a low cost; something that could be easily replicated.

This site had limited community appeal prior to the works. But the new footpath, raised lawn and the wildflower areas has generated a much greater level of community usage which was particular notable during Covid. Local residents have also expressed an interest in wanting to help look after the site.

Quantity of surface water diverted from the sewer.
Quality of the water.
Community engagement with the project.
Share this initiative