Cornwall Council is working towards its 2030 carbon neutral Cornwall plan. Using a new Decision Making tool will support a reduction in the greenhouse gases and carbon emissions produced by the decisions it makes. 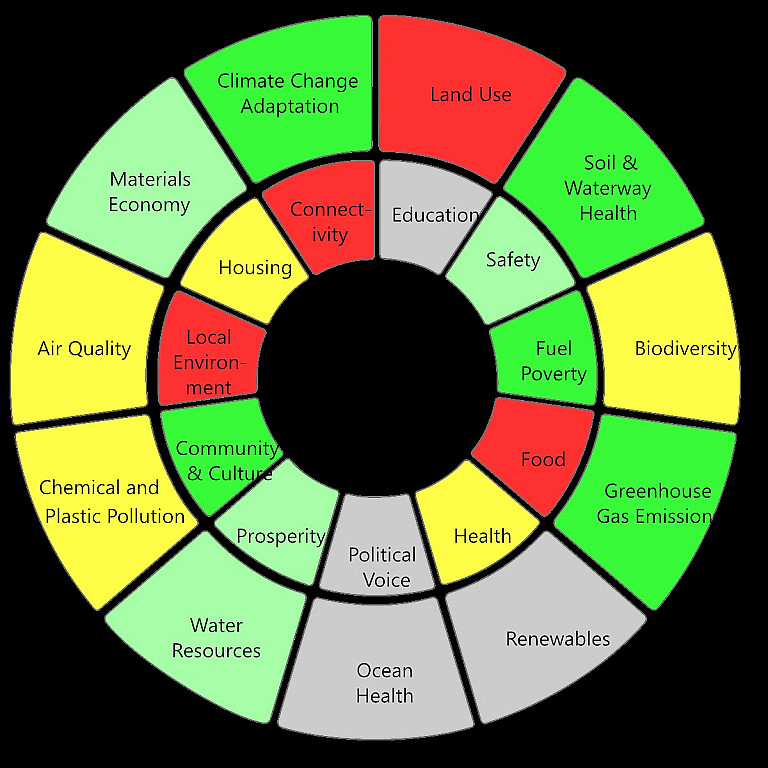 Cornwall Council has set a target for a carbon neutral Cornwall by 2030. Alongside this target, they identified the need for a mechanism to navigate the uncertainties and complexities of the climate crisis and respond with ambitious and imaginative changes that create a brighter future.

It is also important to the Council to ensure social justice is integral to Cornwall’s response to the Climate Emergency and recovery from the Covid19 Pandemic.

The work of economist Kate Raworth on Doughnut Economics was seen as a possible basis for a framework of formally incorporating various new perspectives into our decision-making process, including for the first time things such as greenhouse gas emissions and biodiversity, giving them equal weighting with economic factors such as prosperity and housing. The Carbon Neutral Cornwall Team set about creating a tool that was easy to use and which created an easy-to-understand graphic output to aid in this process. The tool effectively consists of 22 sections (11 outer environmental and 11 inner socio-economic) each with a series of 1-6 questions, developed by experts in those fields. These questions focus on areas relevant to the council’s policy drivers and ambitions, as well as issues that we can practically have influence over in terms of project design and strategy development, that allow users to see their proposals through new perspectives, that they would not necessarily have done under the previous impact assessment system. These answers are then scored and the tool produces a RAG rated graphic output which can easily be used by decision-makers, in this case initially the Council’s Cabinet, to assess impacts that their decision will have across this broad range of areas at a glance.

Impact assessment summaries produced by the tool were used in all Cabinet reports initially and are now being extended to all decision-making forums and are being included at the business case stage of new project and policy development. The tool is helping inform the values of the council as it essentially sets out our position on these issues in a coherent framework for the first time.

Cornwall Council’s latest version is a fully interactive web-forms based tool that utilises PowerBI for its graphics. It was developed entirely in-house at a relatively modest cost. It is helping drive down carbon emissions across all areas of the Council and is also priming officers and members for shifting the focus across to adaptation, a hitherto poorly understood concept, by deliberately including a section which explains the difference between mitigation and adaptation.

Changes to decision-making require, more than anything else, long term commitment and support from the highest levels of an organisation. Whilst the initial development of the tool was not particularly resource intensive, making sure it was implemented and the relevant people trained in its use was - and this required constant pressure from the Chief Executive and Leader of the Council to get people to adapt to a new system. That we were replacing a relatively clunky old impact assessment system with something a lot more user friendly that had a graphic output was also a big help as people saw it as a change for the better.

We also found that many staff were very enthusiastic about climate change formally becoming part of the decision-making process, as it had not been previously, and it was felt to be long overdue. There is a groundswell of enthusiasm for tackling climate change and so now is the time to make those changes. Though the tool covers much more than just emissions, it was developed and promoted by the Carbon Neutral Cornwall Team as a way to help “sell” the idea of it to staff, even though ideally it would sit inside the mandate of our Corporate Strategy Team.

Waltham Forest became the first local authority in the UK to announce full divestment of its pension funds away from fossil fuels, using its pension fund instead to make green investments when suitable competitive opportunities arise.

Using "Warp It", an online clearing house of assets for re-use within and across organisations, to reduce waste and help others recycle more at Hywel Dda University Health Board.