Leicester is boosting bus use, cycling and walking with a programme designed to make active travel more attractive while reducing the dominance of roads in the city centre. 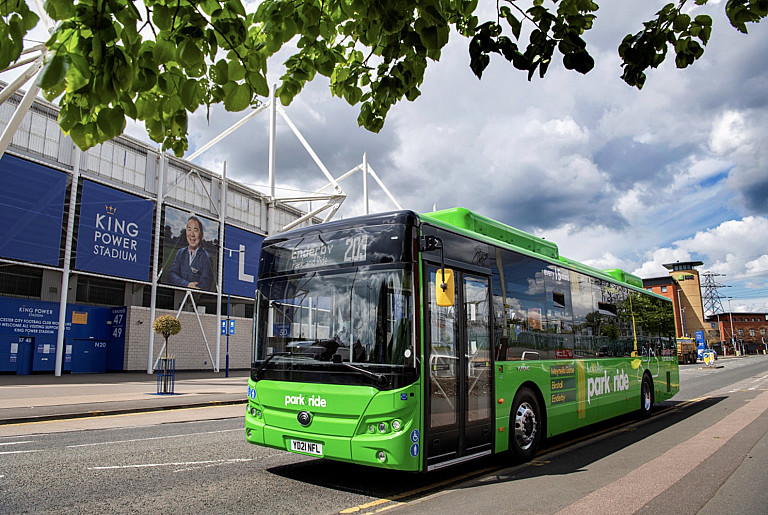 Transport is the largest source of climate change emissions in the UK. Leicester is one of the five fastest growing cities in the UK. Cutting emissions from transport will be key to the City Council meeting its ambitions of becoming carbon neutral by 2030. The council has invested almost £40 million in walking, cycling and public transport across the city. It aims to double cycling rates and boost bus journeys by 10%. Measures include new ticket technology, an express electric bus network, new bus lanes and walking and cycling routes, and electric bike hire.

The city’s transport policies are part of the Connecting Leicester programme, which is designed to make active travel more attractive to local people while reducing the dominance of roads in the city centre.

Projects launched in 2021 include:
- Creation of an electric express bus network linking transport, retail, employment, educational and health hubs.
- Electrification of two park and ride services providing easy access to hospitals.
- Installation of 8km of prioritised bus lanes and the introduction of bus priority measures, such as camera-enforced bus lanes to reduce congestion and speed-up journeys.
- Smart ticketing, including contactless and mobile payment options across all bus services.
- High-quality walking and cycling infrastructure, including a pedestrian and cyclist only footbridge and new toucan and pelican crossings.
- Installation of 26km of new cycle and walking routes.
- Introduction of ‘Santander Cycles Leicester’ which provides 500 electric bikes for hire at 50 city-centre locations.
- The council is currently consulting on a workplace parking levy in order to create funds to allow for a further expansion of safe, attractive active travel measures.

Wide-reaching community engagement is important to making new sustainable travel measures a success. An important lesson from Leicester’s work has been to use pop-up travel measures such as cycle lanes, to win over the public, who can experience first-hand the benefits change can bring.

The authority has also worked with external organisations to create a broader cycling culture across the local area. It has joined forces with partners such as Sustrans, British Cycling and Living Streets to deliver important engagement initiatives.

These include the £300 bike challenge, a fund open to city-based groups to promote a cycling culture more widely. In addition, Open Streets is a monthly event bringing communities together for walks, guided tours, bike try-outs, art and entertainment around the city’s streets. Open Streets has helped to connect local residents and improve cycling safety.

Strong political leadership was essential to Leicester’s approach ensuring that there was a commitment to the significant planning and engagement that was needed.

Political leaders and officers throughout the council must completely buy in to the project, and be unwavering in its implementation, to allow for the significant benefits to be realised.

The first assessment of the impact of Leicester’s policies will be made in mid-2022 and will include economic, health and social benefits.

The first phase of eleven electric buses, powered by 100% renewable energy, replaced diesel vehicles on Leicester’s three park and ride routes in May 2021

To increase the impact of the new transport policies, Leicester City Council have designed these measures to create corridors that strategically link the city centre, regeneration areas and business parks with employment hubs.

The council is using money from the government’s Transforming Cities Fund to decarbonise transport in the region. The investment is already delivering rewards.

For example, the council’s integration of contactless payment methods across public transport systems brings the value-for-money benefit of £3.63 for every £1 invested including through journey time savings, increased patronage and reduced operating costs. Prioritising investment here will save 442,549 hours in journey times per year for existing travellers, through faster onboarding processes.
Read more
Share this initiative
Inspired? Find out more