An interactive exhibition for school pupils about reaching net zero and the technologies we could use to get there by 2050. 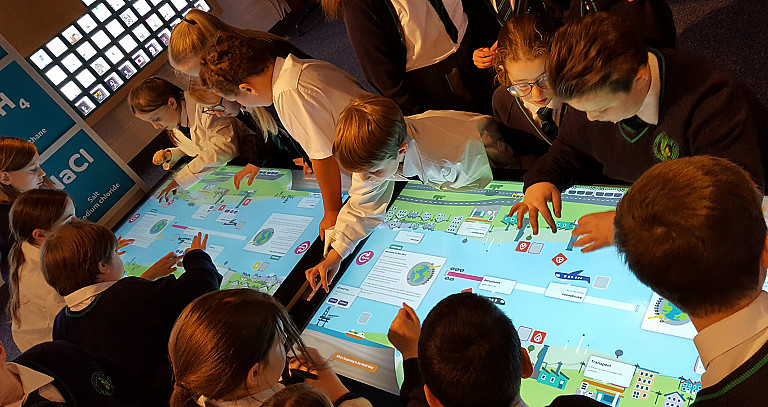 Youngsters play with the Net Zero exhibition at the Catalyst museum. 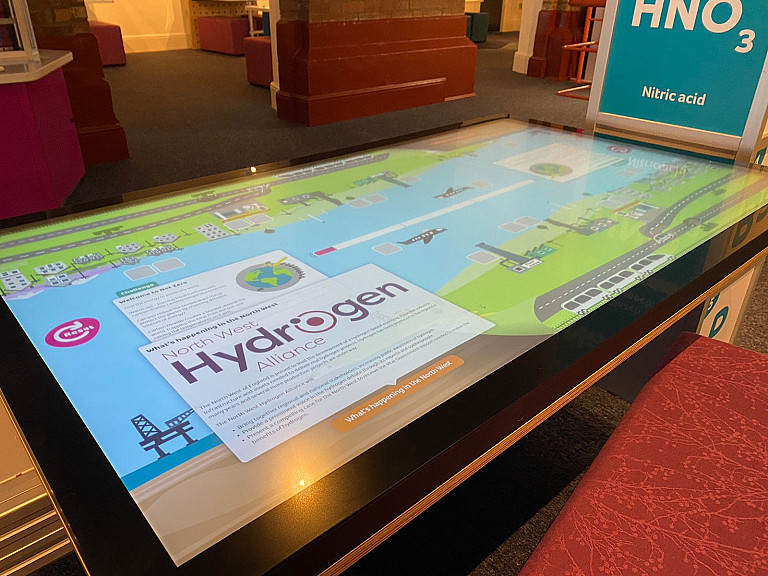 Children and local stakeholders attend the launch of the exhibit. 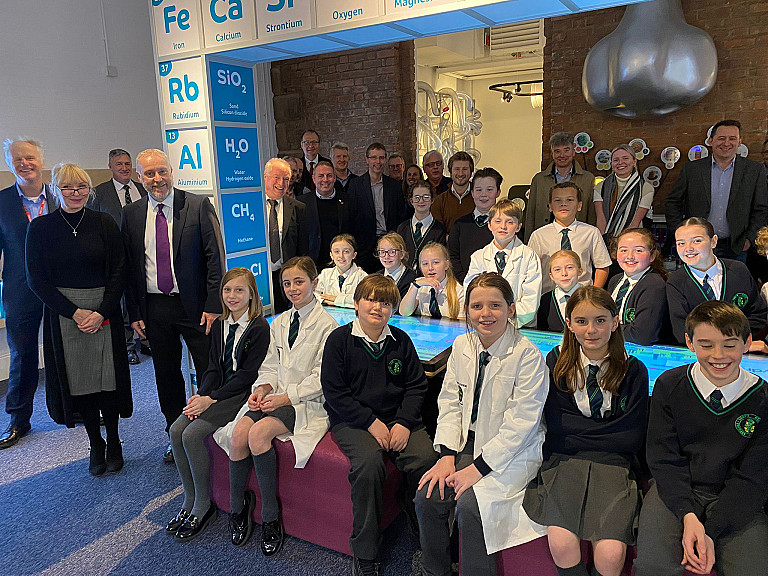 The Net Zero exhibit at the Catalyst Science Discovery Centre.

The net zero interactive exhibit was developed at the Catalyst Science Discovery Centre, which features a range of interactive exhibits that bring subjects to life from Science, Maths, Engineering and Technology to the Humanities and Geography.

The exhibit is a three-level, fun-filled game which teaches all ages about the ways in which we can help tackle climate challenge and deliver a net zero future. It takes players on a journey from reliance on fossil fuels and gas to a greener future in 2050 where hydrogen is used to power industry, fuel our cars and heat our homes.

The game is displayed on a large touch screen which shows how existing industrial processes, transport and homes release CO2. As the user progresses through the decades to 2050 they can introduce low carbon forms of energy generation, such as hydrogen and renewables, which reduce the CO2 impact. The aim of the game is to reach net zero by 2050 by reducing the amount of CO2 released.

During the game, pop-ups set various challenges and can be used to showcase North West projects which demonstrate to the user how the region is working towards a net zero future. This North West context is important in educating the user on what's happening in the region to reach net zero, with the aim to inspire people to find out more and perhaps even look into a career in net zero.

The net zero exhibit was sponsored by the North West Hydrogen Alliance (NWHA) - a collection of over 30 businesses that are driving the establishment of a hydrogen economy in the North West. Their goal is to raise the profile of the role hydrogen can play in meeting net zero targets. The NWHA worked closely with the Catalyst Science Discovery Centre and Museum Trust Ltd (Catalyst), a registered charity, in the development of the exhibit.

The exhibit is a three-level, fun-filled game which teaches all ages about the ways in which we can help tackle climate challenge and deliver a net zero future. It takes players on a journey from reliance on fossil fuels and gas to a greener future in 2050 where hydrogen is used to power industry, fuel our cars and heat our homes. The game is based on the North West and some of the projects anticipated to be delivered in the region over the coming years, including carbon capture and storage beneath Liverpool Bay as part of HyNet North West.

The challenges faced and lessons learned:

- It was important that the exhibit was technically accurate but also accessible, fun and engaging for school children. To manage this a developer who has extensive experience of creating exhibits for children was used to create the exhibit. A steering group of NWHA members was set up to provide technical and expert input and sign off the exhibit at various stages.

- During the research phase other exhibits were reviewed within the museum to ensure lessons were learned for the new exhibit. Various options for the exhibit were identified with the chosen option using the existing 'Compound Creator' exhibit. This also meant that the existing screen could be re-used, reducing the need, and carbon impact, of new technology.

- The exhibit was developed on a digital platform which has enabled updates to be easily made, for example adding new North West projects as they are developed.

The exhibit was launched at a stakeholder event with speakers including Cllr Gill Wood, Deputy Portfolio Holder for Climate Emergency & Renewable Energy at the Liverpool City Region Combined Authority. The event was attended by Year 6 pupils at Lunt's Heath Primary School in Widnes who were the first to test run the exhibit. A press release was issued with the launch covered in local and trade media.

Number of visitors to the exhibit
Media coverage of launch event
Read more
Share this initiative
Inspired? Find out more