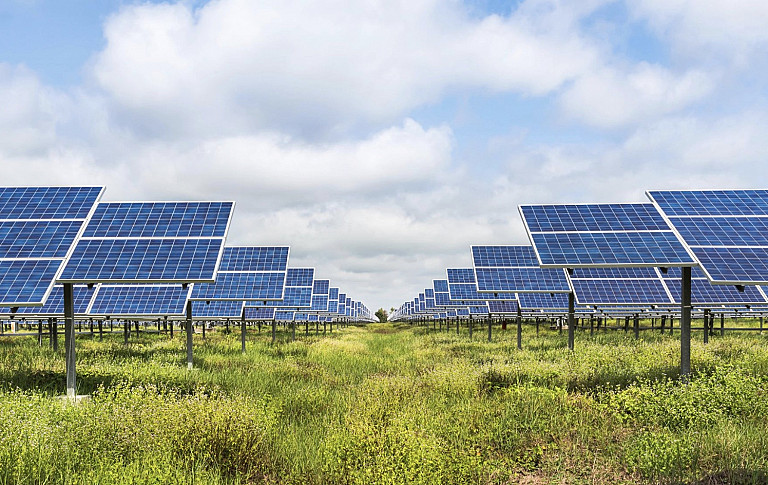 Generating electricity is responsible for 23% of UK greenhouse gases – councils have a key role to play by generating their own renewable electricity on buildings and land assets, ensuring energy is not wasted and supporting the switch to renewable energy sources across their own operations.

Cambridgeshire County Council is aiming to make all the buildings it owns and operates fossil fuel-free by 2025. It is doing this through a range of opportunities including developing its ambitious solar energy projects. The council won the pioneer category at the British Renewable Energy Awards in 2018 for setting up a successful solar farm. It is now launching a host of others.

Solar farms that would deliver surplus energy and therefore revenue, are prioritised, to strengthen the council’s finances. This approach has been incorporated into the council’s six priorities for renewable energy, outlined in its Corporate Energy Strategy, which guides all energy projects in the county, including those on the council’s own estate. They are:
- creating low carbon energy;
- local generation and supply;
- energy efficiency;
- managing cost (via negotiating contracts and collective purchasing);
- generating income;
- supporting sustainable growth.

The Triangle Solar Farm in Soham was an early pilot case for Cambridgeshire and has since become the council’s flagship project fulfilling all six of its criteria. Construction of the 45,000 panel, 70-acre solar farm began in 2016 and it went live in January 2017. This 12MW solar farm produces enough energy to power 3,000 homes.

Triangle Farm was built on the basis of a 25-year life span, over which it will provide an income to the council. This has benefitted communities through support for the council’s frontline services.

Triangle was the springboard for Cambridgeshire to expand its vision. New solar projects in the pipeline total 42MW and will focus on making the most of the council’s assets at park and ride sites, disused landfill sites and across its rural estate.

Anticipate changes in the energy market:

The Cambridgeshire team faced difficulties during the early stages of the coronavirus pandemic due to plummeting prices of oil and gas. Although this was only a short-term trend, it disrupted the development of project business cases at the time. Being flexible and anticipating surprise changes is crucial when overseeing renewable energy ventures, because the market is always rapidly evolving.

The council also struggled with having multiple projects in the pipeline coming to fruition simultaneously. This caused a spike in workload, meaning the team had to manage numerous projects with too few resources. Other councils can learn from this by staggering their projects.

A very important lesson is ensuring council officers are willing to take others on their journey. At Cambridgeshire, the Energy Investment Unit worked on the edges of the council to build up its own expertise but recognised that to move at scale this knowledge needed to be transmitted to a wider set of people within the authority.

Cambridgeshire has witnessed a change in councillors’ appetite for risk precisely because officers have worked closely with politicians to build up their understanding of how projects work. In turn, councillors feel more comfortable with the risks being taken – giving them the political courage needed to make big decisions.

Cambridgeshire County Council manages significant amounts of agricultural land, giving it multiple site options for solar projects. Other councils, especially urban ones, will be more pushed for space, and more likely to focus on installing solar on buildings, though brownfield sites can be suitable for solar projects in urban areas.

Both the Triangle and North Angle solar farms were built on sites with the right characteristics: flat, relatively remote rural locations with space away from residential properties, close to grid connection options. Both farms were also built on agricultural land of average quality, as opposed to high quality land which would be better used for crop growing. Cambridgeshire is lucky to have such natural land assets available.

A lesson from the early development stage of the Stanground project is that support for renewable projects is increasing, even if they are in close proximity to residential properties. The Stanground Project got 9 votes in favour (with 1 abstention) at the Peterborough Planning Committee meeting.

The volatility of government policy means that large solar projects are no longer eligible under the Contracts for Difference scheme, nor is the government’s feed-in tariff scheme available after it closed to new entries in March 2019. In addition, the government has been gradually tightening restrictions on how borrowing from the Public Works Loan Board can be spent to prevent local authorities from making imprudent financial decisions.

However, due to economies of scale and a steep drop in set up costs and prices for solar panels, councils should be able to construct a viable business model even without government support. Cambridgeshire now operates on a ‘no subsidy’ business model. The size of projects has increased so that economies of scale will enable them to work subsidy-free. The UK Infrastructure Bank may become a source of investment for subsidy-free solar in the future.

In the first year of operation, it over-performed expected electricity generation by 5%, raising £50k above projected income per annum. The farm, after debt charges on its capital borrowing, currently raises a net £350,000 revenue a year for the council. Once the original loan used to finance the farm is paid off, revenue will increase to £1m.

This income prevents the council from having to make bigger cuts than it needs to. The money has been used to part fund adult social care services, including buying equipment and technology to support elderly people living independently. It has also been channelled into services for those living with a physical disability or sensory impairment, as well as protection for adults vulnerable to abuse or neglect.

On the back of the achievements with Triangle Farm, new projects have been rolled out across the county. These will contribute to a local green recovery from the coronavirus pandemic.
- North Angle Solar Farm: Work started in 2021 on this 180-acre solar farm with 39MW capacity. It will generate enough electricity to power 12,000 homes, saving 90,000 tonnes CO2 emissions over the 25-year project lifetime. Biodiversity will be enhanced by a community green space, planting of species rich grassland and fruit trees, and over two kilometres of new hedging and woodland to help screen the solar farm.
- Babraham Park and Ride: A smart energy scheme to redevelop a park and ride site in Great Shelford Parish. The planned 2.5MW solar car port would include battery storage and electric vehicle chargepoints. The park and ride could generate enough electricity to power 700 homes and would potentially save 6,400 tonnes of CO2.
- St Ives Park and Ride: A smart energy grid demonstrator project on a park and ride site which will comprise solar panels installed in canopies over car parking spaces, battery storage and electric vehicle charging infrastructure. 1MW of renewable energy generated from the solar panels will power the park and ride, as well as provide energy to two local businesses, via private wire connections.
- Swaffham Prior Community Network: In 2017, the council in partnership with Swaffham Prior Community Land Trust initiated a project to bring cheaper, renewable heat to as many homes as possible in the village. Swaffham Prior will become one of the first villages in the UK to retrofit a heating network into an existing community.
- Stanground Solar Farm: A 2.9MW solar farm with battery storage system on a former landfill site, which is now closed and capped. Planning approval was received in January 2021 and options for the project are now under review.

The council’s new headquarters at Alconbury Weald will be partly powered by an on-site solar car port. The car port will help meet approximately 40% of the building’s electricity demand and provide clean energy for electric vehicle chargepoints. This will amount to a reduction of 720 tonnes of CO2 emissions at the new premises, named New Shire Hall.

These measures are a result of the near zero energy building standards put in place by the council in 2019. When a new asset is purchased or built by the council, like its new headquarters or a care home, standards of 80% on-site renewable energy and high efficiency for the building fabric must be met.
Read more
Share this initiative
Inspired? Find out more