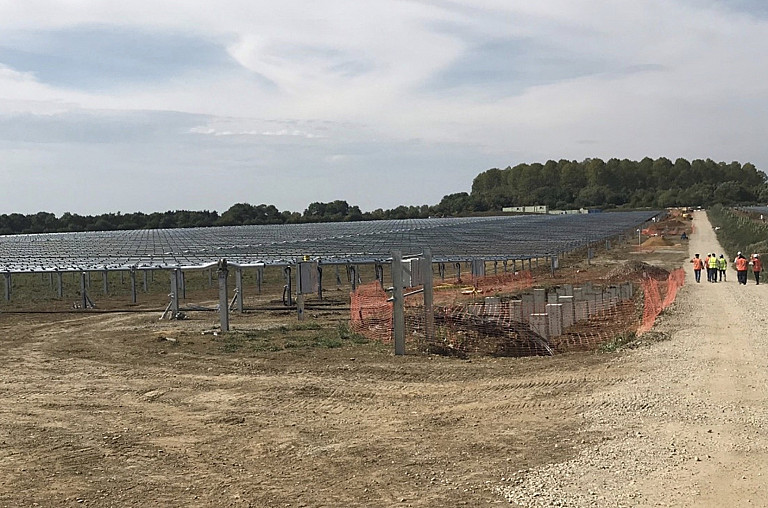 Councils that have declared a climate emergency may then struggle to fund the measures needed to cut emissions in their area. Warrington Borough Council has piloted the use of community municipal bonds, a fundraising tool for local authorities, to fund renewable energy projects. Community municipal bonds allow councils to raise money directly from residents.

Bonds are issued by a council to members of the public, who can invest as little as £5 and get regular return payments on this investment. This is done via an online crowdfunding platform. Once enough has been invested, the council can give back to communities by using these funds to deliver low carbon infrastructure and projects.

Warrington Borough Council announced their pilot bond scheme in May 2020. The bond was issued three months later, available to Warrington residents and others across the UK. It involved a collaboration with ethical investment company Abundance, who administered the bond on behalf of the council. The bond was closed in November 2020, reaching its £1m target three days before the set deadline.

More than 500 investors contributed to the bond, with an average overall investment of £1,921. The bond was structured as a 5-year investment with a 1.2% return rate, making it competitive with high street savings and investment opportunities. Return payments are made to investors every six months, with the option for these interest payments to be donated back to the council – 11% of Warrington investors did so with their first payment.

Setting up and implementing the bond ran smoothly with few hurdles. Early on, there was some doubt from opposition councillors. Warrington is a Labour-held council with a healthy Liberal Democrat and Conservative opposition. The wisdom of launching a bond when the council was focused on fighting the Covid-19 pandemic was questioned. However, once the financial details were fully explained, councillors became supportive; the Liberal Democrats in particular have been very supportive of Warrington Labour’s green agenda. Warrington’s example proves that a community municipal bond can be a tool for a just, fair and green recovery. Moreover, even during the hardship of the pandemic the target of £1m was comfortably reached, testifying to the importance local people give to taking on the climate emergency.

The council is considering more bonds to finance future projects. But it would like more local buy-in and to grow the number of residents contributing. Abundance handled the communications for the first bond, but more council involvement in communication and media strategy could push the local green benefits of the bond, ideally getting more people on-board at an earlier stage.

Be aware of any financial risk to the council.

Funding struggles are one reason why these bonds may appeal to stretched local authorities. But for investors, risk is tied to the continued existence and financial strength of the council. Any councils at risk of a Section 114 notice being issued due to failure to balance budgets – a legal order that restricts their spending – will be unable to implement a community municipal bond. Abundance credit checks councils to ensure that investors aren’t lending to authorities at risk.

For financially sound councils there is still risk to consider. If there are serious project complications or setbacks, they will carry the risk as opposed to investors.

Can this be replicated by other councils?

The success of the pilot in Warrington led the Green Finance Institute and Abundance to launch a national campaign in July 2021 to help local authorities set up community municipal bonds. The Institute is targeting all 404 local authorities in the UK. In September 2021 five councils signed the Local Climate Bond Pledge, committing to issuing a bond by Summer 2023.

Bonds could be used to engage and protect vulnerable communities or boost green skills and jobs – they are flexible and can be moulded to specific council objectives.

Authorities might feel they lack the knowledge and experience to launch a similar bond, but the concept is simple and straightforward.

Warrington Borough Council has used the funds raised to develop a solar farm and a battery storage facility in Cirencester. Construction on the solar farm began in March 2021 and is due to finish in May 2022. The council anticipates that this solar farm will produce electricity above its annual energy consumption. Surplus will be sold to generate revenue, which will be used to advance the council’s Green Energy Strategy.

The Cirencester farm has been a key pillar of Warrington’s bid to the Department for Transport’s Zero Emission Bus Regional Areas (ZEBRA) scheme, which will dispense £120m to support the introduction of zero-emissions buses. If the bid is successful, the council intends to replace its entire bus fleet with electric vehicles and to power this new fleet via the Cirencester farm.

The revenue from the solar farm will reduce fuel poverty by contributing towards the council’s own fuel poverty charity, the Warrington Community Energy Trust. This will in turn save the taxpayer money and further support the council’s delivery of public services.

The scheme has raised the council’s profile and improved its reputation among members of the public – investors reported that the scheme gave them a more favourable view of the authority. Through their investment, more residents are now engaged in efforts to address the climate crisis. The council has therefore cultivated a pool of residents more likely to participate in its other net zero projects, and who may also be relied upon as future investors. On this foundation, there is potential for Warrington to issue more bonds that provide a regular stream of income over the next five to ten years.
Read more
Share this initiative
Inspired? Find out more