Liverpool City Council is helping to improve the condition of rented properties in parts of the city where home energy efficiency is at its worst, as part of its climate action efforts. 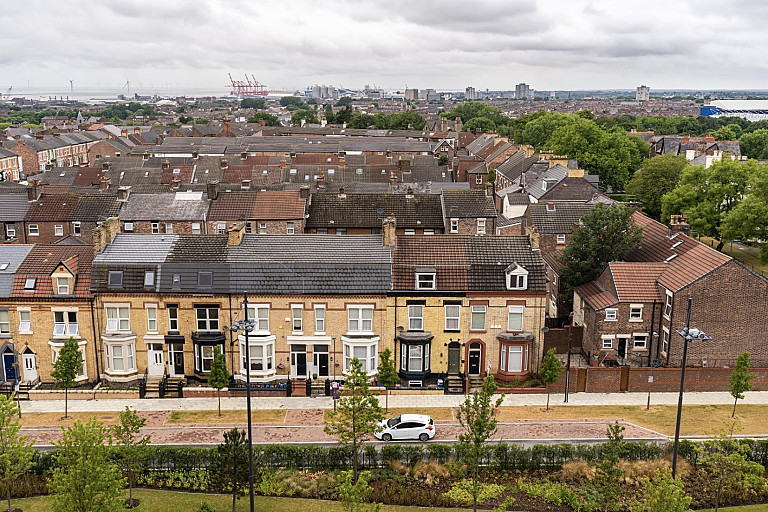 A third of UK carbon emissions relate to housing and poor heating systems and inefficient insulation in homes contribute to people living in fuel poverty. Almost 19 million UK homes have an Energy Performance Certificate (EPC) rating of D or worse,(ratings are from A to G). Privately rented homes are among the least energy efficient. Councils can use their enforcement powers in the private rented sector to help improve standards – with Liverpool City Council leading the way.

A key factor for inefficient private sector housing is the reluctance of landlords to bring homes to the minimum legal standard for energy performance. This may be in part due to ignorance of what the regulations are or that a property cannot be bought up to minimum standards due to age or other restrictions. However, any improvements would bring benefits to residents, reduce fuel poverty, and unlock significant carbon savings.

Using the Government EPC register data, Liverpool City Council has mapped the energy performance of privately rented homes in the city with particular attention on those that are lowest rating (F and G) and the basis of improving compliance with Regulations.

The project is targeting the worst G rated properties, with a wider awareness campaign around energy efficiency and runs from September 2021 to March 2022. The BEIS funding was awarded on the basis that the city would find extensive and creative ways of engaging with the sector.

Liverpool City Council will use its proactive licensing activity to improve the condition of rented properties in parts of the city where home energy efficiency is at its worst. This includes both mandatory HMO (houses in multiple occupation) and selective licensing properties.

The council previously ran a citywide selective licensing scheme between 2015 and 2020. This required all privately rented properties in Liverpool to be licensed; by the end of the period there were over 10,000 license holders and nearly 52,000 properties licensed. To be granted a licence, properties had to be suitable for occupation and comply with conditions relating to fire safety and other hazards but did not at this stage include energy efficiency measures.

The introduction of Minimum Energy Efficiency Standards regulations in 2018 prompted the council to consider how the standards could be enforced locally, and how this could contribute to climate action efforts set out in Liverpool’s city plan.

By creating a consolidated approach with enforcement powers, the council can have a greater impact in tackling non-compliant landlords, whilst creating positive relationships with landlords to make private renting safer and more comfortable for tenants. An intelligence led approach allows local authorities to identify and take the strongest action with non-compliant landlords.

By building relationships with landlords the council can also encourage them to go above minimum legal standards.

Liaising with other council departments, and legal complexities:

Minimum Energy Efficiency Standards legislation is complex, and regulations can overlap with existing legislation such as the Housing Health and Safety Rating System. This can cause different council departments to disagree on the correct interpretation of the legislation.

It is important to work with internal departments, such as multiple housing teams and trading standards, to set a clear policy and objective, understanding that each department has different priorities amongst the many social issues facing private tenants.

Although the Government has shown confidence in Liverpool by approving a significant licensing scheme, the regulatory landscape is complex with a different legislation and powers. This has been acknowledged in a recent National Audit Office report. As part of its reporting on new schemes and their impact, Liverpool will be reporting to Government as well as producing regular public facing reports on progress.

Learnings from the first round of licensing projects:

The council learned from their first private landlord licensing programme that positive engagement should be the priority. It is better to provide information and support to landlords, whilst using examples of good practice within the sector to encourage action. This can reduce time and money spent on compliance issues further down the line.

The authority identified 467 properties that would require targeted action within the context of the DBEIS funded project. Following a review of EPC register and exemptions register an initial 456 properties were sent to 403 owners of 343 properties. 108 properties improved EPC rating to E or above. Follow up letters have been sent to 310 properties.

Following the two engagement letters, around 200 properties were still non-compliant and of these 50+ were identified for more formal enforcement action starting with issue of compliance letters in January 2022. This may lead to the issue of penalty fines.
Read more
Share this initiative
Inspired? Find out more