South Tyneside Council (STC) declared a ‘Climate Emergency’ in July 2019 and pledged to become carbon neutral by 2030 by implementing a range of innovative renewable energy schemes to reduce reliance on fossil fuel.

STC has implemented three major District Heating Networks of which Viking Energy Network Jarrow (VENJ) will be the first to be completed. VENJ is a key to STC becoming carbon neutral by 2. The VENJ Energy Centre is sited on a council brownfield site on the south bank of the River Tyne. It will extract river water and use Water Source Heat Pump (WSHP) technology to feed the VENJ.

VENJ is a UK-first; providing low-cost, low-carbon energy direct to nine connected buildings via a dedicated network of pipelines and power cables, with allowance for future expansion. The project is expected to deliver savings of 1,000 tonnes carbon and £500,000 a year.

The system should run virtually carbon neutral during the summer, with the heat pump powered by the solar farm, and surplus electricity used in Council buildings.

Water passes through rotating filters, a heat exchanger, and is re-injected 3°C cooler downstream. A heat pump uses ammonia an ozone friendly refrigeration technology to increase water pressure and temperature to levels suitable for heating buildings. The heat pump is supplemented by a gas fired Combined Heat & Power (CHP) during higher winter load. CHP generated electricity will feed STC buildings and heat generated will be fed into the network. Peak demand for electricity and heat often coincide, to be offset by storage of surplus electrical and thermal energy. The system has a life expectancy of 50 plus years. A solar farm (PV) installed locally will contribute to the electricity supply, with the surplus being stored for release to the private network.

The project is funded by the European Regional Development Fund (ERDF) managed by the UK Ministry of Housing, Communities and Local Government. The ERDF stimulates local economic development, invests in innovation, businesses, and job creation.

In April 2019 technical consultants were appointed, and undertook technoeconomic modelling, feasibility, and completed the design for planning approval and tender purposes. The tender to select a contractor was successful, and works commenced on site in April 2021, they are scheduled for completion by the end of 2022.

Future phases may supply heat and power to many other homes, offices, shops and hotels across the town centre, and future developments in Jarrow.

STC conducted a heat mapping exercise in 2015 which identified three logical centres in which to develop heat networks. The Jarrow town centre area had the highest density of buildings that were owned by South Tyneside Council or its ALMO, South Tyneside Homes, so the economic benefits were easier collate as the Council were already paying the energy bills.

Inspiration for the water source heat pump came from the Drammen scheme in Norway, which uses Fjord water at 8°C to contribute around 85% of the heating requirements for the town. Since 2016, the Clydebank scheme near Glasgow has also been developed and some techniques of water abstraction and environmental protection from that scheme have informed the design of VENJ. The decision to use the former coal staithes, which were expanded to facilitate coal exports from the region in the 1930s, as a low carbon energy source was technically challenging but a very positive post-fossil statement, and enables the staithes to be preserved for the benefit of the community.

The initial research and scoping for the project was undertaken by Nick Davies of STC's Energy Team, drawing on experience of the former EST Community Energy and DTI Clear Skies initiatives from the early 2000's. The initial concept was refined in conjunction with manufacturers and major industry players such as Star Refrigeration in Glasgow. Preliminary energy modelling enabled a broad scheme to be scoped out and this enabled a successful bid for European Regional Development Funding (ERDF), finalised in December 2018. Once this was secured a tender was let for system designers to develop a proof of concept and techno-economic feasibility, aiming to secure capital investment. This was won by Desco Design & Consultancy Ltd who developed the scheme into a suite of tender documents for OJEU tender.
Colloide won the tender and were finally appointed in December 2020.

The extent of the initial energy network in Jarrow.

Image of some of the buildings that make-up the initial network. 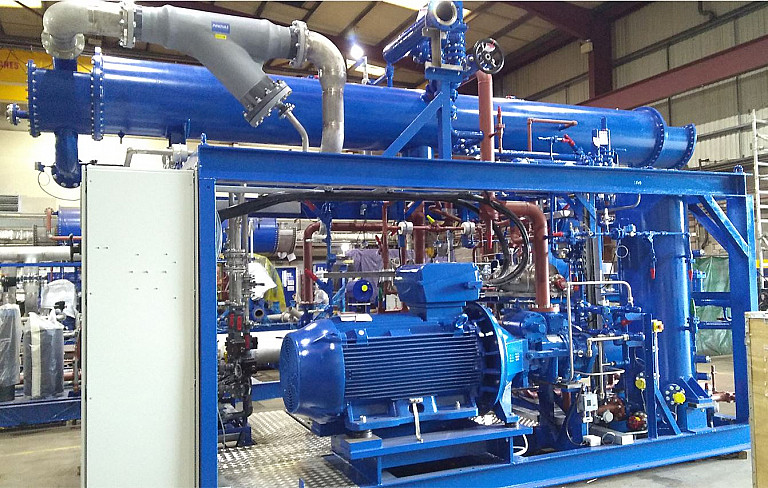 The water source heat pump to be used in the network.
Inspired? Find out more