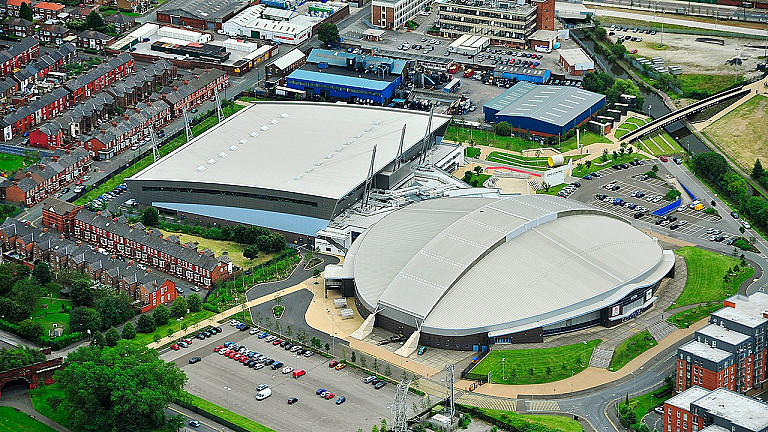 The National Cycling Centre in Manchester.

The National Cycling Centre is a multipurpose cycling venue in Manchester, United Kingdom. It includes an Olympic-standard indoor Velodrome, a BMX arena and outdoor mountain bike trials. The centre has been home to British Cycling since 1994 and the five time Tour de France-winning UCI ProTeam Ineos Grenadiers and formerly known as Team Sky between 2010 and 2019. The Manchester Velodrome has been cited as the major catalyst for Britain's successes in track and road cycling and has been described by Cycling Weekly as the "beating heart of British Cycling's ascension to the top of world cycling".

Manchester City Council have committed to investing in a range of energy efficiency measures at the National Cycling Centre including fabric improvements, LED lighting replacements and the removal of gas heating through the installation of Air Source Heat Pumps.

Working in partnership with Energy Systems Catapult and other Greater Manchester Local Authorities (Rochdale, Salford, Stockport and Wigan) the Authority has secured £8.6m of match funding from the European Regional Development Fund (ERDF). Unlocking Clean Energy in Greater Manchester (UCEGM) is a pioneering project that will deliver a number of renewable schemes across the city region and create a blueprint that can be replicated in other regions across the UK aiming for Net Zero carbon emissions.

In total UCEGM will see £17.2m invested across Greater Manchester, with £2.1m being invested in the delivery of 900 kWp of Solar Car Ports at the National Cycling Centre. This is anticipated to save 240 tCO2 emissions per annum.

The project has been split into phases to ensure access to car parks can be retained in a highly utilised building.

The project is lucky in that there are two separate car parks on site that enable this approach, sectioning a smaller car park to maintain access to a busy building could prove challenging.

As well as the temporary impact of installing the Solar Car Ports, the design also needs to ensure it doesn't impact the future operation of the building in anyway.

These factors are particularly important at the National Cycling Centre as it has specific requirements linked to major events, large vehicles and users transporting bikes on car roofs!