Rattray and Blairgowrie has been named Scotland's first designated Biodiversity Town, in recognition of efforts to improve biodiversity in the east Perthshire town, for the benefit of the community and the environment. 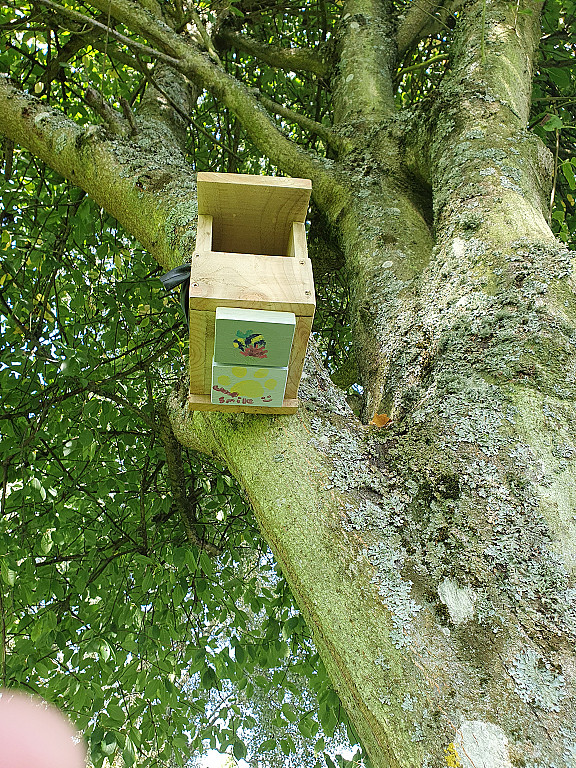 A bird box in a park. 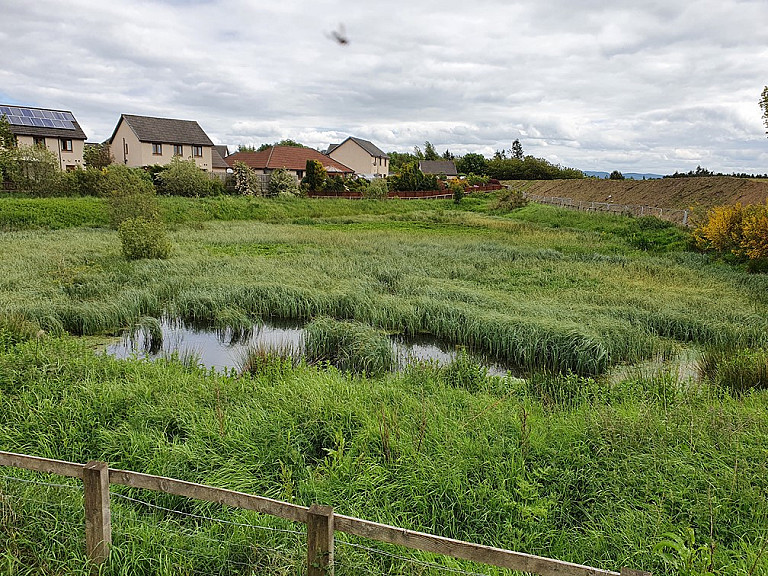 A small area of wetland beside a Primary school.

Blairgowrie and Rattray is a town of roughly 9,000 people in East Perthshire. A number of organisations were brought together in early 2021 by a talk given by Catherine Lloyd of the Tayside Biodiversity Partnership (TBP). That was the germ of the idea to create an environment in our town which would welcome and support a greater diversity of animals: invertebrates, amphibians, birds and mammals.

A related issue arising from Covid was the recognition that there was a need for more local food to be produced and distributed. A new organisation called Proactive Communities was formed to meet the needs of local people experiencing poverty. A by-product of their work was reduction of food waste.

Other organisations which had already been in existence for some time joined with Pro Com to extend our thinking to the wider issue of protecting our environment. Blair in Bloom had a long history of planting bulbs, flowers and shrubs around the town and of creating wildlife havens. The Climate Café was involved in many initiatives including active travel, home energy efficiency and tree planting as well as raising awareness of the seriousness of climate change.

And so Open Spaces was formed. We met online initially then had a series of site visits to develop our ideas in more specific detail. We worked throughout with our local Council (Perth and Kinross, PKC) and with Catherine (TBP) in identifying areas and potential work that could be undertaken. We were encouraged to think of our efforts as being directed towards the creation of Scotland’s first Biodiversity Town.

During the school summer holidays in 2021, two bird box trails were created: one in a local park and one alongside the river Ericht. Children were also helped to make bug hotels and place them strategically.

We then took the step of applying for funding from PKC’s Nature Restoration Fund. The local Blairgowrie and Rattray Development Trust (BRDT) helpfully fronted the application as the Open Spaces group has no legal status. Thankfully, we were successful and have over £13,000 to use making our aspirations a reality.

In no particular order, here's an example of what we do (from November 2021 to March 2022): create a community orchard in a large park which is currently underdeveloped; plant fruit trees, nut trees and other species which are pollinator friendly in spaces owned by PKC including road verges, common land and parks; plant 13,000 pollinator-friendly bulbs around the town; create a wildlife corridor from East to West across the town; contribute to the Tayside Green Graveyard Initiative by placing bat boxes in church yards and other places inhabited by bats, as well as planting snowdrops for early pollinators; work with the 4 local schools to site hedgehog hibernation boxes and encourage pupils to look after them; encourage community members to join Hedgehog Street and add sightings to the Big Hedgehog (UK) Map.

Before starting:
We were fortunate in that several groups existed in the town all of which had an interest in contributing to the creation of a biodiverse town. These included Blair in Bloom with 40+ volunteers; Blairgowrie and Rattray Access Network – again with 40+ volunteers, BRAN maintains the many core paths in the area; the football organisation which has a particular interest in the biggest park in the town and the Climate Café with a membership of 60+. A relatively new organisation (Proactive Communities) which had formed in response to the first lockdown, agreed to take the lead, supported by the Blairgowrie and Rattray Development Trust.

We were also fortunate to have a pre-existing good relationship with the Tayside Biodiversity Partnership (TBP). As none of the groups were expert in biodiversity, this relationship was essential to any success we may have. This grouping gave itself the name “Open Spaces”. It was helpful to have an identity which signalled that, although representing different organisations, we formed something specific for a clear purpose. Our parent organisations helped to give legitimacy and strength to our endeavours.

An important early stage was the weekly meetings we had online to get to know one another better and to define more clearly what we wanted to achieve. We didn’t start out with the vision of creating Scotland’s first Biodiversity Town but this quickly became a rallying call.

Site meetings followed to identify spaces with potential for careful planting and also areas where at risk species could be helped through, for example, nesting boxes, hibernation boxes, pond clearing and so on.

Our local authority (Perth and Kinross – PKC) was another essential partner from the outset – both working directly with us (on creating bird box trails for example) and providing maps and other information.

Along the way:
As already mentioned, any success we had was largely as a result of a combination of individuals’ enthusiasm and organisations supporting (and channelling!) that enthusiasm. PKC and TBP were essential partners. Our local Greenspace officer brought specialist knowledge and links into the many departments with which we needed to work. The resources and advice of TBP meant that we could form a coherent action plan in time to apply for funding.

Looking back:
With hindsight, we could have reached out more effectively to our wider community through the Community Council and local media. Until now we have tended to be arguably too quiet about our plans.

As we become a Biodiversity Town many more people will naturally become involved, choosing which projects and initiatives they are interested in, volunteering and suggesting new projects as we progress.