Rushcliffe Borough Council are on a journey to provide an environmentally conscious, contemporary crematorium and community space for our residents. 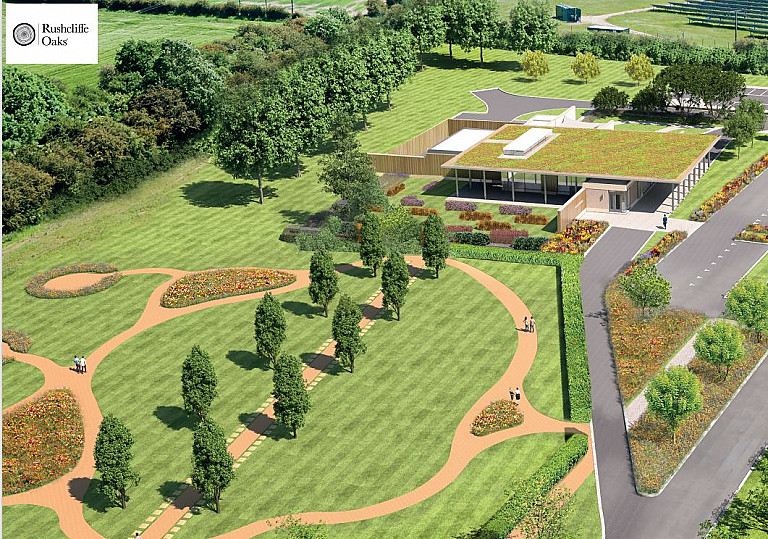 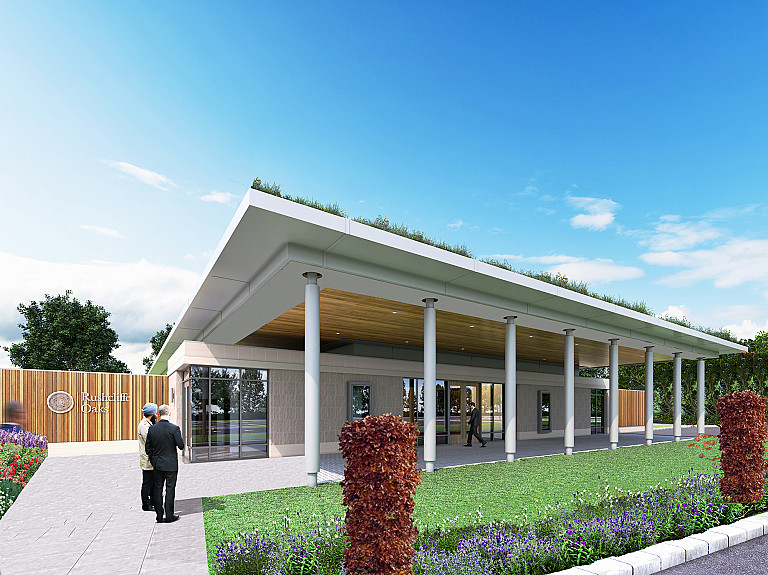 Rushcliffe Oaks Crematorium, due to open in Autumn 2022, is a significant project for Rushcliffe Borough Council and our residents. Rushcliffe Oaks will provide much needed modern, accessible community infrastructure for the residents of Rushcliffe, a borough tasked with delivering a large increase in housing, which will therefore see a corresponding growth in population and services required.

In line with our environmental and carbon management ambitions, we are committed to making Rushcliffe Oaks Crematorium, as green a facility as possible. We have made the decision to install an electric cremator, rather than the traditional gas. In the UK 79% of funerals are cremations, which is around 470,000 each year spread across the UK’s 300 crematoriums. Out of these 300 crematoriums, there are approximately 606 cremator machines; 99% of which are gas powered. For every gas cremation, approximately 245 kg of carbon is released into the atmosphere which, when added together, is around 115,150 tonnes of carbon released each year solely from cremation in the UK.

Electric cremators, which are being manufactured in Holland and Germany, are designed to be highly efficient, reaching a temperature and remaining at that temperature which then minimises energy consumption. Electric cremators produce up to 80% less CO2 emissions than the gas cremators and up to 40% less NOx emissions, depending on levels of utilisation. This is expected to result in an annual saving of 725,695 kWh for Rushcliffe Oaks. Heat exchangers installed on the machines can also provide a sustainable heating system for buildings, further reducing the carbon impact of the development by removing the need for traditional heating systems.

In addition to the gas cremator, Rushcliffe Oaks will have air source heat pumps providing heating and hot water to the building using electricity rather than gas and at a much lower annual energy use. This is expected to result in an annual saving of 139,500 kWh.

Lastly, in terms of technology, PV panels will be installed and are expected to supply 15% of the annual electricity demand from the building (excluding cremator). This is expected to result in an annual saving of 5000 kWh.

In addition to considering the building's environmental impact, we have also worked closely with landscape architects to establish a landscape setting for the Rushcliffe Oaks, which will help assimilate the development into its surroundings and support and enhance the ecology of the overall site. 750 new trees will be planted on site and those existing will be protected.

In 2018 an opportunity was identified to provide much needed additional community infrastructure in the form of a new crematorium in Rushcliffe. However, there were concerns from the outset of the project about how we would deliver the scheme in an environmentally conscious way. As we began to learn more about the industry, we became increasingly aware of its environmental impact. For every gas cremation, approximately 245 kg of carbon is released into the atmosphere which, when added together, is around 115,150 tonnes of carbon released each year: solely from cremation in the UK. While we remained committed to delivering a new crematorium for our residents, we became determined to find a way a of doing so which would align with our ambitions for carbon neutrality.

Officers initially explored resomation. Known as natural water cremation, resomation is a more environmentally sustainable method than gas cremation. However as we were embarking on our project, resomation was still in its relative infancy and so not a viable option for our crematorium. Fortunately, through further research officers became aware of electric cremators as an alternative to gas. Although relatively new to the market, electric cremators are successfully in operation in Europe and at the point that we began to research them were on the cusp of being installed at a Huntingdon Town Council's new build crematorium in the UK.

Officers made contact with colleagues at Huntingdon and began to engage with Dutch manufacturer DFW learning more about the electric cremator's green credentials (up to 80% reduction in CO2 emissions and 40% reduction in NOx emissions). Officers then reviewed the business case in light of the increased capital investment required for the electric cremator. Fortunately they have lower running costs than gas and as equipment is kept at a constant temperature, this can result in lower maintenance costs and fewer days out of service for refractory and lining repairs. Whilst the initial capital cost is higher for electric, the life span of equipment is longer at 15-20 years and is cheaper to run, both in terms of energy costs and maintenance, thereby providing a better whole life cost. Based on the carbon credentials and revised business case the Council took the exciting decision to become among the first crematoria in the UK install an electric rather than gas cremator.

As an authority that has never provided crematoria services before, we have benefited hugely from the expertise and generosity of neighbouring authorities and colleagues further afield at Huntingdon Town Council. We would encourage any local authorities who are interested in our scheme to reach out to us as we'd be delighted to share our learning and help contribute to the improving carbon impact of the cremation industry.