Nottinghamshire County Councils street lighting LED upgrade to save both the environment and money for the Council.

Hucknall Bypass before and after upgraded street lighting. 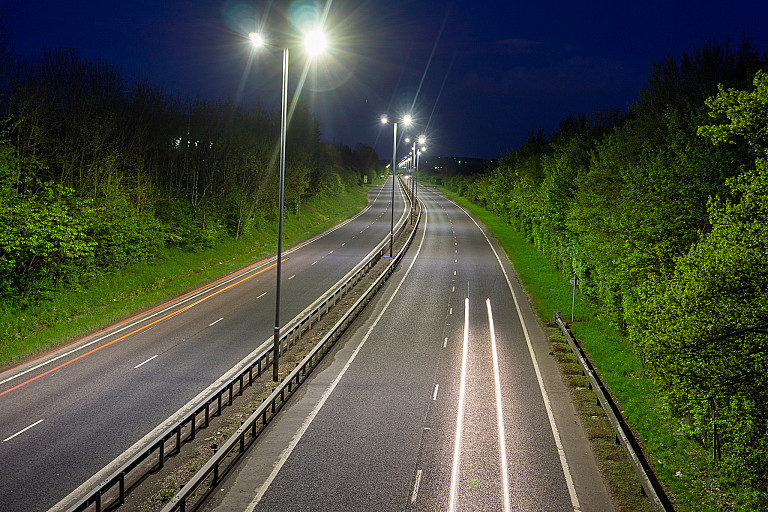 A620 with upgraded street lighting. 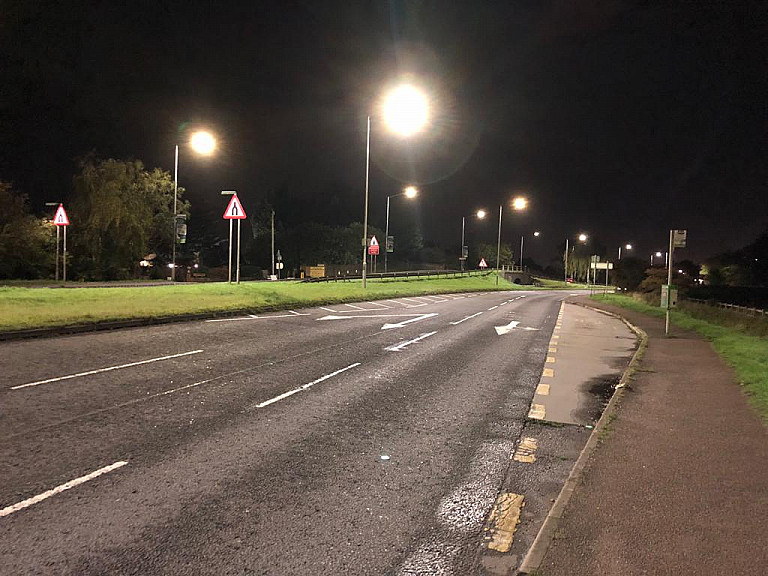 LED streetlights have taken over from traditional sodium lights due to advances in technology and improvements in lumen output. They are small beams of light that can be directed where needed so are much more efficient than the previous 'lamp throwing light everywhere' approach.

Local Authorities Street Lighting is one of the highest energy users in the UK. To be able to reduce the spend and still provide a good, often better service is unheard of but that's what we've done in Nottinghamshire with the LED upgrade project.

In 2012/2013 Nottinghamshire County Council did a trial in some areas of switching streetlights off between the hours of midnight and 05.30am. This met objection from residents due to fears of increased crime and safety. The scheme was paused which gave the project team opportunity to look at an alternative approach. LED's were just entering the market so research followed to see how NCC could embrace the new technology.

NCC introduced a policy for any new streetlight to be LED in Sept 2013, lighting would be dimmed between the hours of 2200-07.30 when movement on the highway is at its lowest. Dimming is very gradual and mostly goes un-noticed.

NCC are responsible for approx. 94,000 streetlights, to roll out an LED upgrade programme was therefore always going to be a challenge and come at a cost. The project team looked at alternative sources of funding and partnered up with Salix Finance who provides interest-free Government funding to the public sector to improve energy efficiency, reduce carbon emissions and lower energy bills.

Nottinghamshire is broken down into 7 districts, we decided to focus on 2 areas at a time and just replace the low-pressure sodium (SOX) lanterns as these were the most inefficient. The high-pressure sodium lanterns (SON) followed on.

Business cases were developed, and the cost of energy calculated on existing lantern v the LED alternative. The payback came in below five years which meant NCC qualified for the Salix Funding.

Projects were put forward to cover approx. 10,000 lanterns per year so it was manageable in terms of securing stock, design works involved and realistic targets for operatives to deliver.

The savings are substantial. With the interest free loan from Salix it has meant NCC have been able to reduce their Street Lighting Energy usage by 48% and 78% tonnes of Carbon. This has been at no additional cost to the County Council as the money they would have been spent on energy has been spent on paying back the loan for lanterns.

Everybody has a view on lighting: it can be too bright, too dark, too white or too orange - it's impossible to please everyone. What's got to take priority is that the lighting is fit for purpose, meets British Lighting Standards (where possible) and gives good light levels to promote safer movement on the highway.

There are lots of LED lighting manufacturers in the market, so it is therefore essential to make sure you have a good specification drawn up that meets the lighting standards and can deliver a range of lighting options in a reasonable timescale. NCC carried out a lengthy process to get this right, it was beneficial to include everyone effected by the changes into the decision making, from street lighting designers, purchasing, stores and street lighting operatives. All requirements were considered as part of the tender and this help to build up confidence and buy-in on the project.

NCC also carried out trials of the four preferred lantern manufacturers from a shortlist of tenders. We then designed and installed a lighting scheme on 4 different roads around Nottinghamshire so we could evaluate each one.

Questionnaires were sent to each of the households on those streets to gauge opinion. The information was used to help decide on the way forward with LED’s and who would be the chosen manufacturer for Nottinghamshire.

NCC work with Holophane Lighting, which is an established manufacturer based in the UK. It is worth being aware of countries that can provide cheaper LEDs but deliveries can be slow and the standards may differ to our British Lighting Standards.

Holophane use Marwoods as a distributor so lanterns are ordered in bulk and kept at Marwoods then a ‘call off’ arrangement is in place as the project progresses. Our project has resulted in 1,000 LED being installed per months so it’s vital to stay ahead with orders and deliveries.