Mansfield District Council has pledged to take action to mitigate and reduce harmful emissions produced across the district. The Lord and Bishop Street EWI scheme is one of a number of projects being undertaken to achieve this goal. 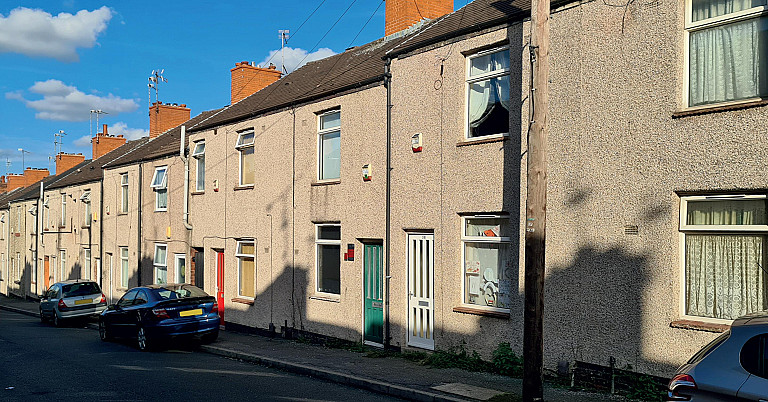 Properties on Lord and Bishop Street prior to the project.

Properties on Lord and Bishop Street on completion of the project. 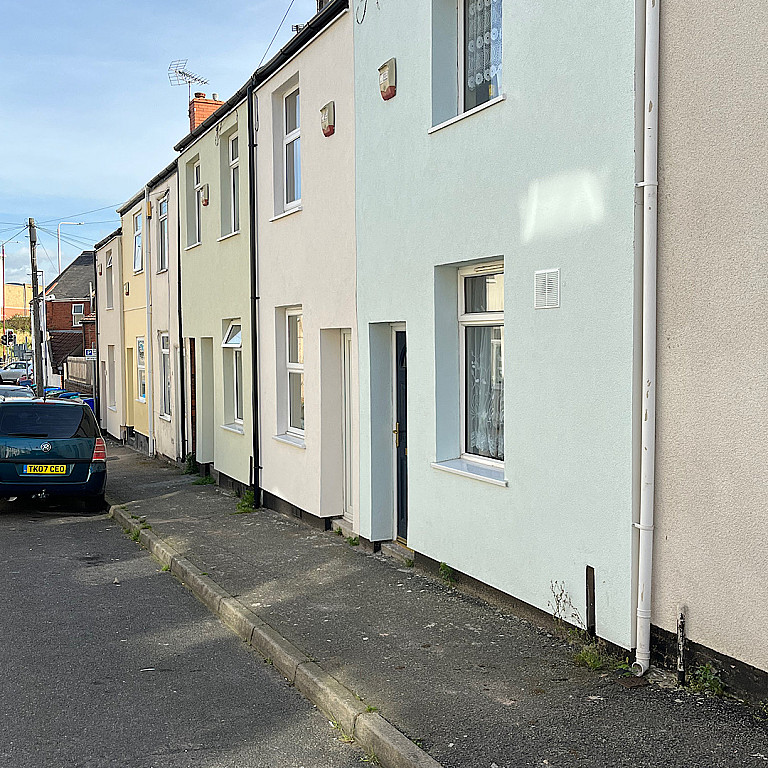 Residents of both streets are happy with the outcome of the project.

In late summer 2020 BEIS announced funding would be available for local authorities who wanted to introduce schemes to reduce carbon emissions from properties within the area as part of the Green Homes Grant Local Authority Delivery Scheme Phase 1A. Mansfield were the only authority in Nottinghamshire to successfully place a bid for the funding.

The Lord and Bishop Street project aimed to provide external wall insulation to properties which would improve the insulation of the homes, reduce heating costs as well as reduce the carbon emissions. The streets were chosen following a review of Mansfield's housing stock condition database as well as the English indices of deprivation which placed the area as amongst the 10% most deprived neighbourhoods in the country.

The properties on Lord Street and Bishop Street were built around 1910 and were constructed with solid brick walls. As many of the residents receiving means tested benefits meant that the opportunity to lower the energy bills as well as improve the insulation and reduce carbon emissions was something that the Council was keen to progress further. There would be multiple benefits of the scheme as installing external wall insulation would improve the energy efficiency of the properties and reduce the carbon emissions as well as increase the health and wellbeing of the occupants, reduce household bills and improve the overall appearance of the area.

The Council and our delivery partner and installer, Westville Ltd, worked closely with the local community to minimise disruption whilst the project was in operation. Westville had a presence on the streets throughout the scheme so that any issues or concerns that the residents had were quickly addressed and resolved. Prior to the project commencing Westville delivered leaflets to all of the properties to introduce themselves and give an overview of the scheme. Social media was also utilised to promote the project and the benefits of external wall insulation. The Council identified all the owners and wrote to them individually to advertise the scheme and maximise uptake of the EWI. All households were given the option to choose the colour of their EWI which helped to encourage uptake of the scheme when engaging residents to support the project.

External wall insulation was installed on 45 properties across Lord and Bishop Street. Despite less than 50% of the properties taking up the External Wall Insulation the overall appearance of the streets has improved significantly. Many of the households have already noticed a difference to their heating costs and have expressed their satisfaction with how the area now looks. We have achieved a significant reduction in carbon emissions and are using the lessons learned when developing future schemes in the district.

Funding for the project had been provided by the Department for Business, Enterprise and Industrial Strategy following a successful bid by the Council for carbon reduction measures through the Green Homes Grant Local Authority Delivery scheme. BEIS set the eligibility criteria for the grant therefore MDC needed to identify areas of the district to target for the scheme.

We were able to use our BRE Housing Stock Condition Database which was commissioned following a successful bid to the MHCLG Enforcement and Innovation Fund in early 2020. Using the data collected we were able to identify areas of Mansfield that would benefit most from external wall insulation as well as having properties and households that would meet the eligibility criteria for the grant being offered. Reviewing the database identified Lord and Bishop Street as suitable areas to be targeted.

The Council also already had a contract in place with a Trustmark Registered external wall insulation installer, Westville Ltd, which enabled mobilisation of the project to be expedited.

The project was delivered during strict Covid restrictions which created challenges. The pandemic affected the availability of contractors, as well as caused difficulties with supplies of materials and hesitance from households reluctant to allow contractors and council staff into their homes. Ultimately completion of the project had to be extended to allow time to overcome these issues and increase uptake.

As part of the criteria for landlords to join the scheme BEIS required landlords to provide a contribution of a third towards the costs of the EWI. When initially contacting landlords there was a positive response however as the project progressed many landlords withdrew. Although this was disappointing, on reflection it shouldn’t have come as a surprise as landlords joining the scheme would need to make a significant contribute of between £3000 - £4000 towards the cost of the work. The contribution would represent a significant proportion of a landlords annual income with Local Housing Allowance rates for the area at £103.56 per week (£5385.12 p/a) (2 bedroom) and £109.32 (£5684.64 p/a) (3 bedroom).

If we were to operate a similar project again we would introduce a range of measures rather than solely offering external wall insulation. EWI was chosen as we had the ability to move swiftly with the project however offering a menu of carbon reducing measures would have increased the uptake and allowed for greater carbon savings to have been made. To increase the amount of landlords joining the scheme we would also offer a payment plan or offer to place a charge on the property covering the contribution rather than ask for payment up front.