Leeds City Council has been helping schools lower their emissions, with a range of measures engaging school leaders and students that includes working to halve the carbon footprint of the meals it serves by 2030. 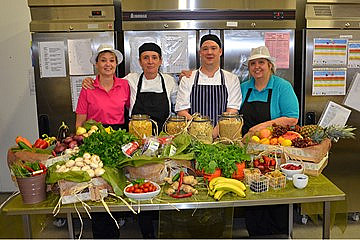 Food and farming is a significant contributor to the climate and ecological emergencies but does not always feature in councils’ Climate Action Plans. School food is important because this is the largest area of procurement for most councils, and an opportunity to help give children a better diet.

Leeds City Council has been helping schools lower their emissions, with a range of measures engaging school leaders and students. This includes working to halve the carbon footprint of the meals it serves by 2030. To do this, the council has committed to:
- Buy local, serve local – source food from producers and suppliers based in Yorkshire and the surrounding counties to cut food miles.
- Ban air-freighted imports – procure no food transported by air.
- Review menus to reduce meat and dairy and give catering staff the data to easily compare the carbon footprints of meals, and adjust them accordingly.
- Establish a research partnership with the Consumer Data Research Centre at the University of Leeds, to better understand the impact of the food it serves.

The plan was announced in September 2021, and builds on progress made on influencing schools to switch to low-carbon menus. In January 2020, two meat-free days a week were made available at in 182 primary schools served by the council’s provider, Catering Leeds.

The new Planet Friendly Menus use more plant protein and less meat on non-vegetarian days to reduce the proportion of meat in the meals. Vegan options have been expanded across the board and menus feature lots of seasonal fruit. Menus exceed the National School Food Standards and meet the Bronze Food For Life accreditation.

Allow time to bring schools on board:

Leeds schools were not required to make the switch. Schools are able to choose a different provider or request a different menu from Catering Leeds should they wish. The new menus are not compulsory, only strongly recommended by the council. As a result, the time taken to convince each school to make the switch varies between schools and not all those serviced by Catering Leeds opted in. The pandemic also significantly disrupted the rollout of the new menu.

Balancing views and sticking to the plan:

Despite being supported by many, removing meat options from schools is still a controversial move. The council faced criticism from a minority of residents to the changes and the removal of a meat choice on certain days (though this was not a consensus view). Parent concern must be anticipated and accounted for – other councils might consider seeking parent input to the consultation process.

Councils will be facing the opposite pressure from campaign groups. For example, in March 2021 Animal Rebellion launched its Plant Based Schools campaign which now has 40 groups around the country. Their demands are: for schools to have two fully vegetarian days a week (like Leeds) and to serve only plant-based meals at council events. They plan to target councils that have declared a climate emergency.

Leeds stuck to its plan which is an important part of tackling climate emissions, but it ensured that it engaged with schools and residents to bring as many of them as possible on board.

Current central government School Food Standards legally require schools to serve meat three days a week. They also have to serve oily fish at least once every 3 weeks, and dairy every day – both of which also impact the extent to which state schools can go further. To expand vegetarian and vegan-only options Leeds has taken the approach of reducing the amount of meat in its meat-based dishes which is within the guidelines, but councils should also be proactive in seeking changes to the government guidelines.

The School Food Standards do not apply to academies or free schools established between September 2010 and May 2014, so there may be more scope for councils to influence these schools to go further – although many work to these standards anyway.

Friends of the Earth, Sustain, Eating Better, and others have produced a Campaigner guide – Local authorities, food and climate which will help campaigners wishing to influence their council but should also be useful to councils wishing to include food as a key part of their action on climate.

A plant-based school meal generates, on average, 75% less greenhouse gas emissions than a meat-based meal. Leeds primary schools can save up to 75 tonnes of carbon by making the meal switch.

The new vegetarian and vegan options have been well-received by children, contrary to the popular idea that children are averse to healthier, greener food. Due to disruption caused by the coronavirus pandemic, detailed monitoring and surveying has not been possible, but anecdotal feedback from head teachers and children has been positive so far.

Changing menus is only one element of extensive climate engagement with schools by Leeds City Council.

Changing travel to school. In 2020, the council installed 14 School Streets as a trial to support active travel to schools. In addition, over 10,000 young people receive Bikeability training each year and in 2021 the annual ‘Scootember’ event, run by the council’s Influencing Travel Behaviour Team saw over 900 participants.Every September, schools receive funding for scooters and storage to encourage uptake of a fun but sustainable mode of school travel.

Decarbonising buildings. In March 2021, the council secured £25.3m to decarbonise 38 publicly owned buildings, including several schools, as part of the Public Sector Decarbonisation Scheme by the government’s Department for Business, Energy and Industrial Strategy. School kitchens will benefit from carbon savings that result from the council’s pledge to use 100% renewable electricity by 2025.

Uniform exchange. The council has also funded the Leeds Uniform Exchange, run by Zero Waste Leeds. The exchange recycles old school uniforms, saving parents money and reducing clothing waste. As of September 2021,105 groups were up and running across the city.
Read more
Share this initiative
Inspired? Find out more