Greening Hereford is increasing tree canopy for the wellbeing of people and wildlife and to help us reach our zero carbon target. Year 1 pupils from Our Lady's primary school in Hereford plant a tree. 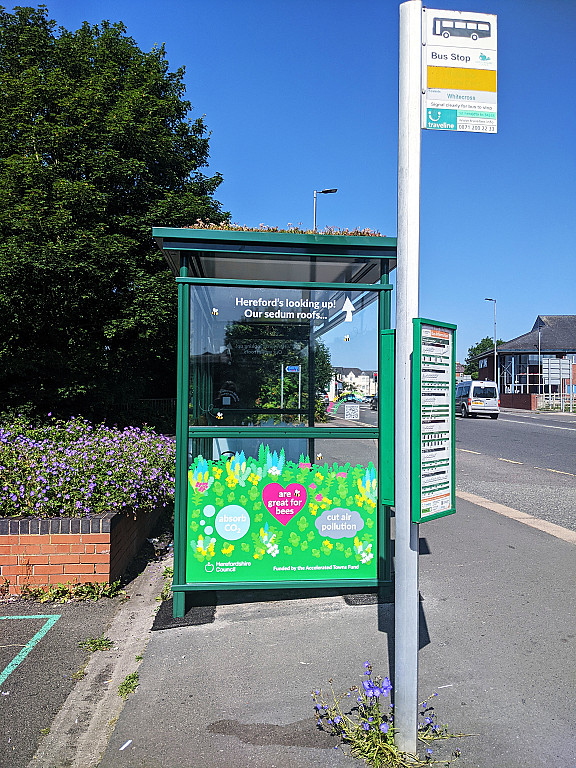 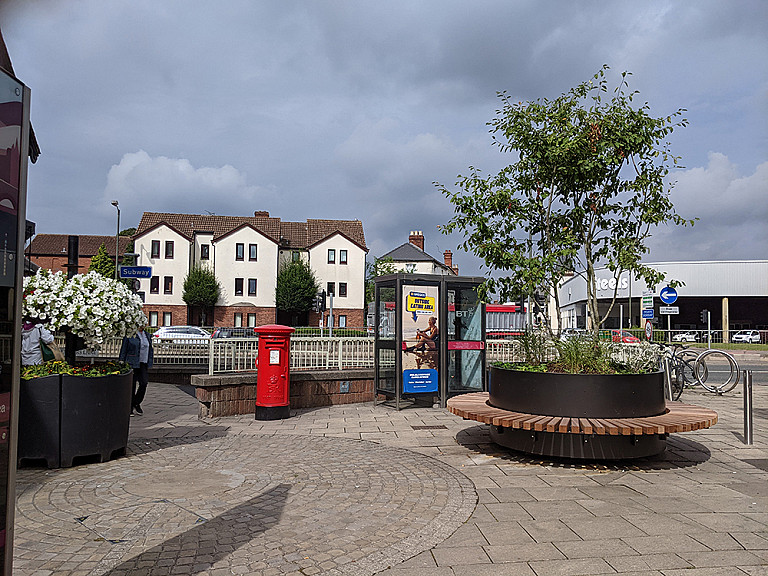 One of the new tree planters with seating.

At the end of 2020 Herefordshire Council was awarded £750,000 from the government accelerated Towns Fund to deliver a programme of projects across Hereford that would provide economic and environmental benefit.

The Council’s County Plan sets a priority to improve our local natural environment, and encouraging the planting of trees is a big part of this. It had previously been identified that the tree canopy of the city was slowly decreasing so to stop the decline the ‘Greening the City’ project was developed.

500 trees were given away free to residents, schools and businesses through the ‘City Trees’ scheme to be planted in gardens and other grounds across Hereford.

Over 100 more trees were planted in specially designed planters incorporating new seating areas in the city centre enhancing the environment of High Town, Eign Gate and Broad street by bringing greenery and nature into the centre of the city.

Three new bus shelters with living sedum roofs were installed in the Whitecross area of the city. These aimed to absorb carbon, cut air pollution and provide a haven for bees and other insects alongside the busy city roads.

Trees and plants are beautiful additions to public spaces and properties. They help to improve air quality and tackle climate change and so will help us meet our target of zero carbon by 2030.

Tree planting is a great way for everybody to help to create new spaces for nature and a greener environment for future generations as well as improving on the health and well-being of residents of the city.

The Greening the City project will be monitored over the next 5 years and it is hoped the increase in tree canopy will been seen and measured through aerial photography.

The funding was received in November 2020 had to be spent by the end of the financial year. This meant that the various schemes had to be turned around very quickly. Unfortunately the time scales meant that trees could not be purpose-grown for the project so we had to source trees that were available from a local suppliers. The variety of tree species for the ‘City Trees’ scheme were carefully chosen so that their height and spread would be suitable for the majority of gardens in Hereford.

The scheme was a tremendous success with schools, businesses and hundreds of local residents joining in and doing their bit for the city’s wildlife and natural environment. It was great to be able to engage school children in this project and hopefully inspire them to help nature and enhance the environment throughout their lives.

The city centre planters have been very popular and the new seating is well used. They have softened the built environment of the city centre and bring seasonal interest into the city amongst their other many benefits.

The sedum bus shelters were highlighted with vinyl stickers to draw attention to the initiative by encouraging people to ‘look up’. They have flowered well and survived through the very dry hot summer months. They were well received with lots of social media support for this more unusual innovative project.