The largest rooftop solar co-op in the UK with over 1,000 members and 88 sites, including schools, community buildings and businesses.

Egni Co-operative was established and registered in 2013 by Awel Aman Tawe (AAT), a community renewable energy charity in South Wales. AAT has 20 years’ experience of researching, developing, and delivering renewable energy projects at a local level.

The first rooftop solar energy co-operative in Wales, Egni Co-op was set up to try to reverse climate change, keep money in the Welsh economy and reduce electricity costs. We generate clean energy, enabling our sites to take action on climate change and be more financially stable.

Egni Co-op is now the largest rooftop solar co-op in the UK, has more than 1,000 members, and has developed over 4.4MWp of capacity on 88 sites - including schools, community buildings and businesses.

We were partly inspired by other co-ops across the UK. We’ve had a lot of help from the Brighton, Bristol, and Plymouth Energy Co-operatives, all of which have carried out similar work - installing rooftop solar and engaging people in helping to fund their projects.

Through our co-op share offer, we also give people the chance to invest their money towards a more sustainable future and get a fair rate of return. All surplus money goes into climate change education in schools - and we’re delivering that in partnership with our fellow charity, Energy Sparks, which has a brilliant energy data platform for schools. The website shows electricity, gas, and solar generation, so the children can use that data and linked educational resources to make further changes through behaviour like turning lights off, etc.

Unlike a lot of work in the third sector, it’s really easy to measure. What’s more difficult to measure is our work in schools, like our ‘energy raps’ to raise awareness of climate change in Swansea and Pembrokeshire schools. We’ve also worked with local artist Sion Thomas Owen, and with Ynni Da on an urban energy project where we have discos powered by bikes, and the children have a lot of fun.

We can give advice to any groups interested in doing something similar. If they have a roof they think is suitable for solar, we can give them a free assessment, and then it’s up to them whether they install it themselves or want us to. Part of the basis of co-ops is that we’re happy to help, whether it’s paid or unpaid.

We have worked especially closely with Newport City Council, which has set a target of becoming a carbon neutral council by 2030. We’ve installed 6,713 solar panels across 27 sites (2.074MW) in the city, with an estimated annual generation of over 1,900,000 kWh of clean electricity. The solar panels were funded by a loan from the Development Bank of Wales and Egni Co-op’s share offer. The council agreed to enter into a power purchase agreement (PPA) with Egni for the energy generated by the panels over 20 years. Egni’s team was responsible for the delivery of the project, engaging with stakeholders, the community, and the lead PV installer, Joju Solar. As part of the programme of works, over 1,700 panels were installed on the roof of The Geraint Thomas National Velodrome of Wales, making it the largest roof-mounted solar panel array on any building in Wales, with an installed capacity of 500kWp - enough clean renewable electricity to power 190 average homes per year.

One of our biggest challenges was the pandemic. We were ready to go with the Velodrome panels – had the scaffolding up - and then Covid-19 hit. Because of lockdown, we couldn’t just leave scaffolding up with no-one working on it, so we had to take it down. The months went by, and we were finally able to put it back up and finish the project.

Businesses we’ve worked with include, Leggett & Platt Automotive - the largest user of electricity in Ammanford - for whom we installed 200 kW of solar panels; and Pontus Research, who now have 80 kW on their roof in Hirwaun.

We’ve installed 4.4 MWp of solar and the turnover of Egni Co-op is about £450,000 a year from solar generation. We’ve installed solar on 88 sites throughout Wales - 44 schools, and the rest are businesses and community centres. We’re saving our sites over £100,000 per year in electricity costs and reducing carbon emissions by over 1,000 tonnes per year.
Read more
Share this initiative The roof of the Geraint Thomas National Velodrome in Newport 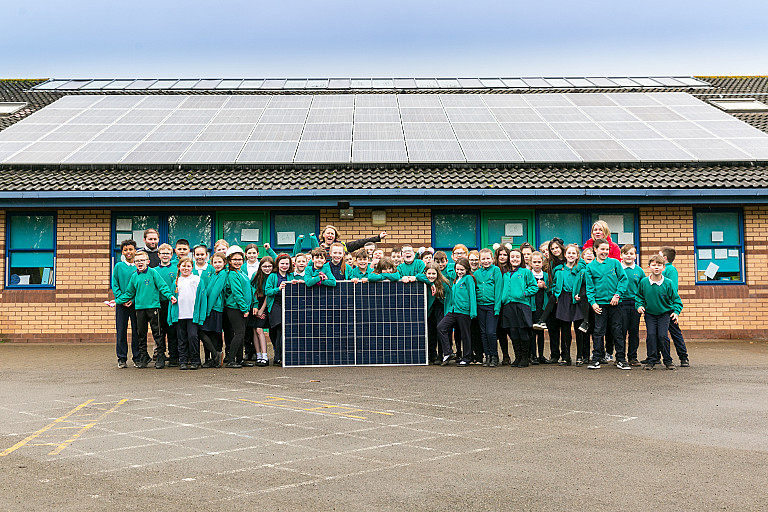 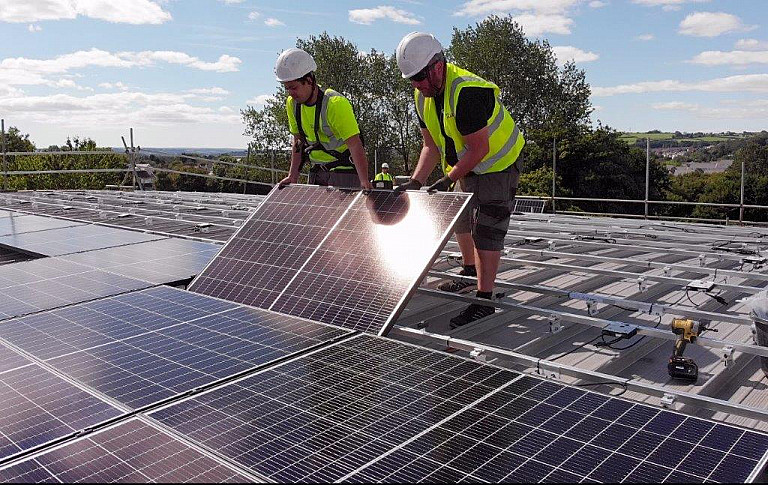