Collaborative Action For The Natura Network

For peat's sake: saving bogs so they can help save us.

Northern Ireland's peatlands will be important in helping tackle climate change but only if we look after them. Drained, cut for turf, over-grazed, invaded by rhododendrons and damaged by atmospheric pollution, our bogs are struggling - but we know how to fix them.

Blocking drains, to hold back water on our bogs, is the first step to making sure a bog can do what it does best - lock up vast amounts of carbon. Doing nothing means those damaged bogs are actually emitting tonnes of carbon each year.

Wetter bogs are better places for specialised plants found nowhere else especially the bog builders - Sphagnum mosses that actually build peat. Wetter bogs also support more invertebrates such as craneflies, a vital food source for many of our declining wading birds like snipe and curlew.

Ulster Wildlife is one of 11 partners in the Collaborative Action for the Natura Network, supported by funding from the EU INTERREG programme managed by the Special EU Programmes Body. The CANN team aim to restore peatlands and wetlands in Ireland, Northern Ireland and Scotland. Newry Mourne & Down District Council lead the partnership which brings together local councils, academic institutions and charities in the battle for our precious peatlands.

Using high tech information, the team has pinpointed where to block drains to maximise peat formation on raised and blanket bogs, and where to target weed removal to stop plants like rhododendron drying out our peatlands.

We are working on over 1,000 ha much of which is owned by farmers across the three countries. We have now trained up some of those farmers to help our bogs going forward: some can now build peat dams using their own diggers, while others have been trained to tackle rhododendron.

Peatland restoration is often called the 'low-hanging fruit' in our fight to reduce harmful greenhouse gas emissions because healthy bogs lock up so much carbon. Drain blocking on raised and blanket bogs helps undo years of damage, re-wets the bog and makes habitats much more likely to support the array of plants and animals adapted to this wet and acidic environment - including carnivorous plants, specialised wading birds and dragonflies galore.

We built out project around work done on just one bog and scaled up the approach to cover over 1000 ha of peatland. Our project is rooted in science but concentrates on returning bogs to full peat forming capacity.

The work, at this scale, was only possible with funding from the EU INTERREG programme. Our partnership used the skills of botanists, hydrologists, ecologists, and digger drivers to make our bogs better. Taking the time to get to know the many people who own these bogs was vital: we now have farmers who are skilled peatland restorers!

Challenges were Brexit and Covid, need we say more?

We've established a proven method of restoring peat bogs that we hope can be modified, rolled out and used to help degraded peatlands across Northern Ireland - collectively reversing emissions from degraded bogs and turning these into healthy habitats that lock away carbon, as well as providing resilience to the effects of climate change.

Gathering water table data from 135 piezometers across 10 raised bogs around NI.
Monthly measurements taken for several years before drain blocking started, and we will continue to monitor after drain blocking.
Capacity for bog to form peat and store carbon.
Read more
Share this initiative 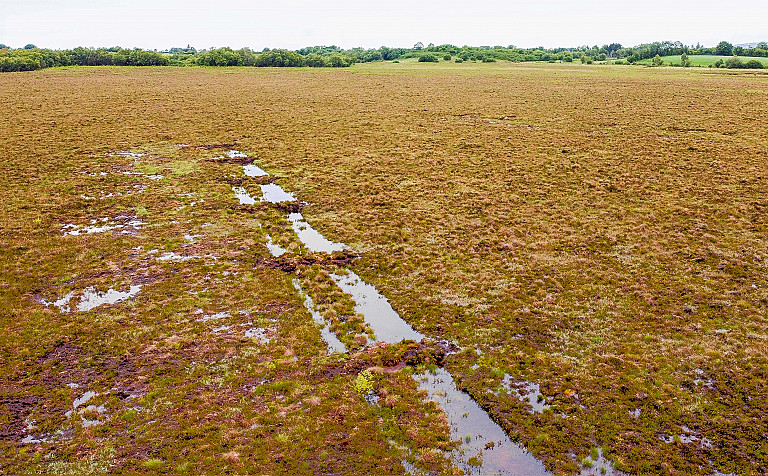 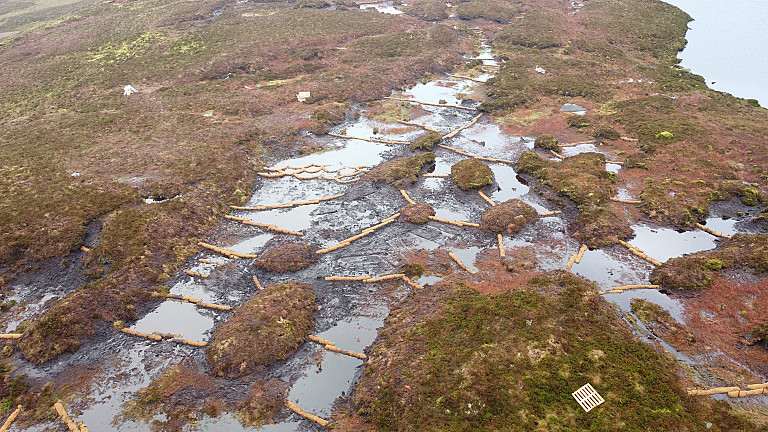