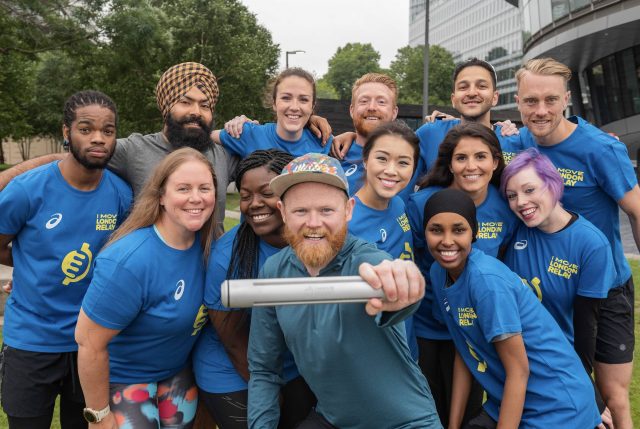 Thousands of runners are preparing for their stage of a record-breaking relay effort to pass a baton 7,767km through 18 countries. The baton contains a climate message that will be delivered to world leaders at the next global climate summit, COP27, urging more support to help people tackle the climate crisis where they live.

Called ‘Running Out of Time’, the relay will be the longest non-stop relay ever attempted. We believe it will be possible to do - thanks to the support and energy of so many people - and that collectively we will send a really bold message that will be impossible to ignore.

The inaugural stage begins on September 30 in Glasgow (the venue of last year’s global climate summit), following an opening ceremony where a written message will be sealed in the baton. Thirty-eight days and nights later, the baton will finally arrive at COP27 in Sharm el-Sheikh, where the message will be read out to those gathered in Egypt.

Think about this for a moment.

Carried by runners, cyclists and sailors, the baton will journey without stopping through Scotland, Wales, England, France, Belgium, Netherlands, Germany, Austria, Italy, Slovenia, Croatia, Bosnia and Herzegovina, Montenegro, Albania, Greece, Cyprus, Israel and Egypt. It will cross seas, mountain ranges and deserts; travel through villages, towns and capital cities. Every 10km or so, it will be handed to a new group of people with fresh legs who will carry the baton a little further along the route. People from all walks of life – from students to Presidents – will be carrying baton, ensuring it arrives in time for the start of the summit.

Why such an extraordinary and lengthy way to send a message? What’s wrong with sharing what we want to say on social? If we wanted something more personal and hand written, what about the ordinary postal service? Even snail mail appears quick as lightning compared to this huge, combined effort of delivering a message by hand across a continent.

Without doubt, the way in which a message is delivered significantly influences how the message is received. According to Canadian philosopher, Marshall McLuhan, content and medium are so intertwined that the central message is not necessarily the content but the way it is presented. This observation certainly applies to our mass participation relay, to the route we have chosen, and to the design of the baton we are carrying.

So, what are thousands of people saying by carrying a climate message along a circuitous route, sealed in a relay baton that's handed from group to group until it reaches its final destination?

The relay itself is a tangible demonstration of togetherness and of how much can be achieved if we all work towards a common goal. What better way to represent the unity and strength that we wish to see from today's leaders than the world’s biggest, continuous relay which requires courage, commitment and co-operation to succeed?

The most direct route from Glasgow to Sharm El-Sheik is almost 2,000km shorter than the relay route. So either we’re bad at planning or there’s something special about the journey as well as the destination. In fact, the route we will take weaves together an amazing set of climate action projects, shining a light on their impact and inspiring others to copy them. The route is a golden thread that showcases the awesome potential of collective local action.

Award-winning Glasgow-based designers, 4c Design, have many accolades including the Glasgow 2014 Commonwealth Games Queen's Baton. The iconic relay baton they have designed for this event is no less impressive. The sealed chamber that holds the climate message is surrounded by 18 strands that represent the participating countries. Holding these strands together are four turns of a distinctive spiral that represent the four essential layers of climate action – international, national, local and individual.

Our aim is to shift the view of tackling climate change from a challenge that requires a global response measured in decades to something we can all do, together where we live, with real benefits to those around us. And it's possible to do right now. Repeated by thousands of people in countless places along the route, it’s a message that we hope will be impossible to ignore.