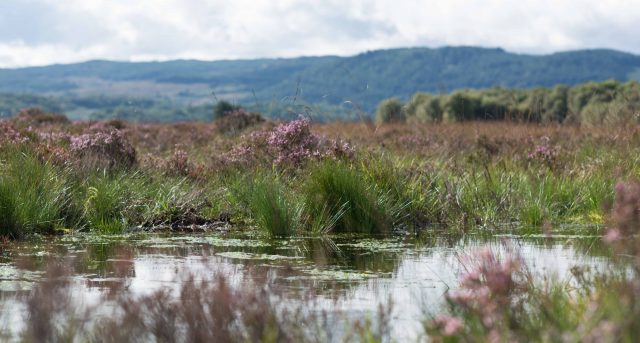 Back in March, the Crichton Carbon Centre published a blog about why peatlands needed to be on the COP26 agenda. We’ve teamed up with them to give another 5 reasons why these important habitats need to be part of the COP26 conversation.

COP26 will take place in Glasgow at the start of November, 2021. This is a huge opportunity to talk about peatlands, which need to be recognised globally for their importance in storing carbon and therefore tackling climate change. Not sure what peatlands are? Read our FAQ here.

Without further ado, here are five (more) reasons why peatlands need to be on the COP26 agenda.

Peat is a type of soil that is rich in organic matter, which is defined as any of the carbon-based compounds found in nature. This is because in a healthy peatland, the waterlogged and acidic nature means that when organic material such as plants die, they don’t fully break down. Peatlands therefore store a huge amount of carbon which doesn’t get released (as long as they stay healthy) and sequestering carbon will help tackle climate change and bring countries closer to net-zero emissions.

The emphasis here is on continually sequestering and storing carbon. Habitats like woodlands, hedgerows, and gardens only sequester so much carbon before their uptake plateaus as they reach maturity. This is why, although peatlands can be slower at accumulating carbon when compared to, for example, a woodland, they’re so important when we’re talking about the long term global carbon balance.

2. Peatlands around the world are degraded

Unfortunately, it is estimated that 15% of the world’s peatlands have been drained.

The IUCN says “CO2 emissions from drained peatlands are estimated at 1.3 gigatonnes of CO2 annually. This is equivalent to 5.6% of global anthropogenic CO2 emissions.”

The estimate is that peatlands in the UK are releasing 20 million tonnes of carbon dioxide and equivalent gases a year (4% of the UK’s annual greenhouse gas emissions!) because 80% of them are degraded.

When a peatland is degraded, not only does it release the carbon it has stored, but it can affect water quality and aquatic species, contribute to downstream flooding (much like any drained wetland), and lose the unique plants and animals which have evolved to be specialist species and brilliantly adapted to the inhospitable habitat.

Peatlands can be degraded for any number of reasons. They have historically been drained to improve them for agriculture, livestock grazing, and forestry; they have been harvested for compost and fuel; and they have been rotationally burned as part of upland management regimes.

Scotland has made great progress in committing to restoring its peatland habitats, including a pledge of £250 million over the next 10 years. We still have a lot more to improve, and there are many other countries throughout the world that have not yet recognised the importance of restoring our peatlands.

We need that to change, and COP26 could be a great time for it.

3. Peat is harvested globally to use in the domestic compost and horticulture industry.

It is very likely that every tomato plant you’ve ever bought has been grown in peat. That applies to flowers (including the cut flowers you can buy in supermarkets), houseplants, herbs, and so on – anything in a pot is likely sitting in peat compost.

Most compost bought for use in domestic gardens also has peat. Add this all together and it is a huge figure that we are extracting from our peatlands.

But why? Remember back when we explained what peat is. Since it’s so rich in organic matter, peat makes a wonderful growing medium. Unfortunately, it is much more important to keep the peat in the ground, therefore keeping the peatland healthy.

Next time you start planting up your garden, try to look for peat-free compost. It’s just as good. We’ll go into this more at the end of the blog.

The compost industry must find another sustainable way of creating good quality compost – such as using wool or manure.

4. Peatland fires are becoming a huge issue – and they can burn underground for years.

Fires in Indonesian peat swamp forests in 2015 emitted nearly 16 million tonnes of CO2 a day. This is more than the daily emissions from the entire US economy.

Again, because of peat’s richness in organic material – which isn’t broken down – it makes a great fuel source and can burn if dried out. In the grand scheme of things, it doesn’t match coal, gas, or oil, but this is a much younger non-renewable energy source that still burns very well.

The peat is often under layers of plants (commonly the sphagnum mosses) and can be very deep. In Scotland, peatland is regularly 8m deep, but the average is between 0.5-3m. Because of the depth and spread of peat, fires can keep burning underground and reignite wildfires miles from the original site as soon as conditions are right. With hotter, drier seasons coming in many places because of climate change, peat fires will get more common.

If we can keep peatlands healthy and wet, they’re much less likely to burn or reignite. This is why restoration works are so important, especially because burning peat releases a lot of carbon back into the atmosphere on a very short time scale.

Restoration often starts by fixing the hydrology of a peatland site – such as blocking manmade drains, for example.

5. Peatlands have huge cultural importance – from archaeological finds to traditional ways of living to folklore.

In Scotland, crofters have common grazing rights. This includes access to peatland which they could cut for fuel. Even now, some families (typically in the North and West) still do so – although they may use machinery rather than the traditional tools which disturb the peatland a lot less – and take great pride in making a peat stack better than their neighbours. There are even regional differences in how the peat is stacked.

And it is not surprising that a landscape which covers 20% of Scotland’s land surface is steeped with myths, legends, and folklore.

Nor is it surprising that important archaeological finds – often preserved incredibly well due to the peat conditions – turn up in our peatlands. The IUCN’s scientific review on Peatlands and the Historic Environment (2010) says: “the 4th millennium BC footpath, the Sweet Track in the Somerset Levels and the best preserved ancient human remains in the UK, the “bog body” known as Lindow Man from Cheshire, were found in peatlands. An estimated 22,500 archaeological sites may survive beneath or within peat deposits.”

For many, cultural importance may not mean much in the grand scheme of things, but it’s just as good a reason as any that peatlands should be kept in a healthy condition that welcomes communities. Engaging and connecting with nature is one of the most important motivations for individuals to tackle climate change, the biodiversity crisis, and fight for protections for unique landscapes.

What can you do to help?

One of the biggest actions someone can take is to commit to buying peat-free compost. You may worry that this means your plants won’t grow as well, but this simply isn’t true. You can read more about peat-free gardening on Beth Otway’s website, where she trials peat-free compost to show you can get the same results, or read her guest blog for us here.

If you live in an area where there are peatlands, you can write to your representatives and ask them for more protections and even to stop allowing the harvest of peat for industrial fuel and horticulture.

Finally, go out and connect with your local peatlands if you have them. Encourage your family and friends to do so too. If you’re creative, take inspiration from them – the importance of art in the role of environmentalism is only just being recognised. Even if you’re not arty, simply appreciating the unique (and often endangered) plants and animals that live there can make these habitats more meaningful to you.

Crichton Carbon Centre is best known for our work on peatland restoration, carbon management, sustainable land-use and environmental education. We are an independent, not-for-profit, applied research body, focused on the challenges and benefits of transitioning to a low carbon society. Our projects combine scientific research and direct action to achieve real results in sustainability. Currently, we work on behalf of Peatland ACTION to restore peatlands in Dumfries and Galloway, and run two projects: Peatland Connections, using art and science to bring communities together with their peatlands, and Biosphere Explorers, our environmental education project.

Derry City and Strabane District Council is creating a zero waste circular economy, by preventing waste creation in the first place, encouraging its preparation for re-use and delivering separate waste collections for recycling, composting and digestion.

Trafford Green Hydrogen will use renewable energy to produce green hydrogen fuel for transport and heating by 2023. It is part of the Trafford Low Carbon Energy Park which includes one of the largest battery storage schemes in the UK.