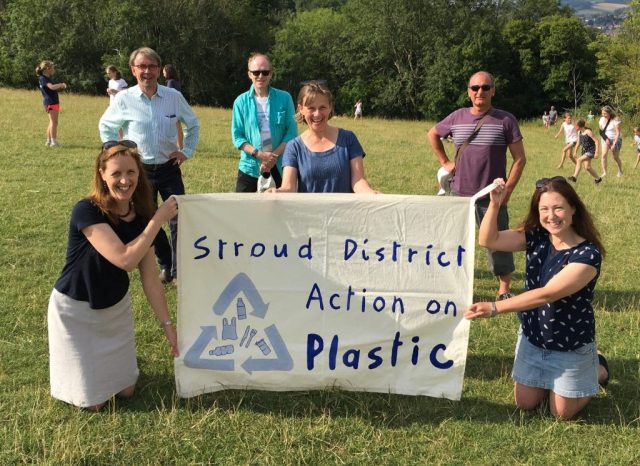 Stroud District Action on Plastic is a volunteer group that formed following a public talk I was invited to give about my family's experiment of buying no plastic for a year during 2016. Like us, there were many people locally who were fed up with the amount of single-use plastic in the shops and the general throw-away/buy new premise of products on the market. Many of us were already adding our names to petitions and supporting environmental groups, lobbying government and companies for better environmental practices. But we were frustrated with the slow progress, particularly where plastic was concerned, and wanted to become less reliant on plastic in our own lives.

Our group started by signing up cafes and restaurants in our high street to offer free tap water refills to reduce the need for plastic bottles. We also asked the town council to install a drinking water fountain in the park next to the high street.

Interest in our group grew and attracted funding which enabled us to employ a part-time project coordinator. We began working towards becoming a plastic-free community, based on Surfers Against Sewage's excellent community accreditation scheme. We produced a comprehensive website to help local people start their own plastic-free journey. The website lists recycling schemes, repair cafes, local markets and plastic free shopping opportunities locally and online, as well as how-to-guides for anyone starting off on their plastic-free journey.

All this hard work was rewarded in 2020 when we became one of the first districts in the UK to receive Surfers Against Sewage’s Plastic-free Community status. It doesn’t mean that this area is plastic-free, it’s a recognition that we’ve got the key organisations involved and are making good progress towards kicking our addiction to throwaway plastic.

The benefits to the community of this type of initiative can be enormous. In addition to sharing knowledge and resources - for example tool and toy libraries, clothes swaps, or repair cafés - it supports local producers and individual shops who can offer local, seasonal food that is unpackaged and has not travelled half-way around the globe.

My advice to anyone wanting to start a similar project in their own community would be to look at the Plastic Free Community scheme and also check out our website for advice on how to get started on reducing your plastic footprint at home, the workplace, at school or in the community.

We were very thrilled recently to learn that Stroud District Action on Plastic has been given the Queen's Award for Voluntary Service. Without all the wonderful volunteers who tirelessly and generously give their time and skills, we wouldn’t have achieved what we have and have plans for more!

Claudi Williams is the Chair of Stroud District Action On Plastic.

Barti And The Big Blue

Investigating the real-world benefits of planting carbon-absorbing seaweed forests in our seas.