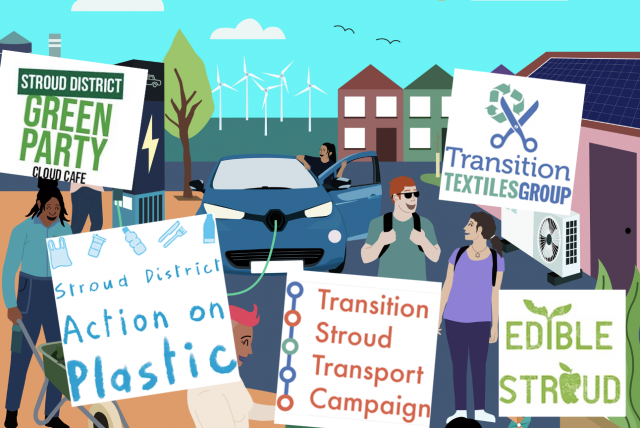 When I first moved to Stroud, Gloucestershire, in 1988, national journalists were arriving at the railway station and asking taxi drivers to ‘take me to the trees’. The drivers knew exactly where to go - a row of magnificent old beech trees marked for removal to make way for a new supermarket. Outraged at the unnecessary loss of beautiful and environmentally important features of the town’s landscape, local people took to sleeping and living in the trees to prevent contractors cutting them down. Their determination and action not only caught the media’s attention, it also won through and the trees still stand proud to this day.

This wasn’t the first time that community action has shaped the development of this town. In fact, Stroud is well known as a hub of green thinking. I’ve lived here for 33 years and seen how the town’s web of sustainability and community action has grown and spread, fuelled by successes (however small), the sharing of ideas and people coming together. Again and again, new community initiatives and greener ways of living have sprung up, led by individuals believing there is a better way.

Community togetherness seems to be a key ingredient – the majority of the community projects in the area are run by volunteers, people who have a passion for tackling an issue and have tentatively put out the question to others: ‘Here’s my idea, what do you think? Could we do this? Could we make a difference?’. This acts like a magnet, attracting others who feel the same but may not have had the confidence to develop an idea on their own.  Sustainability has become so ingrained in the culture of the town, that those living in other parts of the county immediately understand what’s meant by the phrase ‘it’s so Stroud’.

Great things can evolve when people are willing to stick their necks out.

When Claudi Williams and her family lived plastic-free for a year after the horror of swimming whilst on holiday in the ‘plastic soup’ that was the Aegean Sea, it’s no surprise that Claudi wanted to share their experience and learning with anyone interested. This simple act has snowballed into a district-wide project. It now employs a part-time co-ordinator; includes local councils, schools and global companies in its membership; and is advising communities county-wide about tackling plastic waste.

In the 2000s, Stroud was the fourth town to join the now-global Transition Towns Network – which originated in that other hotbed of sustainability, Totnes. Under its umbrella, volunteers have set up a Repair Café, Edible Stroud, Transition Textiles Group, Transition Stroud Transport Campaign, Stroud District Action on Plastic and the annual Potato Day!

The economic decline of the town centre led to Stroud’s Community Planning Conference: created by hundreds of residents who worked together with the district council to plan how to revive the town and create a place where they could shop and socialise locally - supporting the local economy, reducing travel to neighbouring towns and creating a place that’s at the heart of a sustainable community. Once again, it was started by a handful of people who wouldn’t accept the status quo.

Local people often know what they need to make change happen and, in Stroud, this included professional support. Shortly before the trees campaign, community action had once again defeated a district council plan - this time to demolish and replace very old buildings in the High Street with modern shops. Weary of fighting, residents wanted help to take positive, pro-active action and a local environmental charity, Stroud Valleys Project, was the result. It’s still going strong with its paid staff supporting 18 locality-based community projects that help people and nature thrive together.

And like begets like: the more sustainability grows, the more it starts to attract like minds and have a wider influence. After travelling around Africa to study beer and communities, plus a spell at the Soil Association, Greg Pilley settled in Stroud and set up one of the UK’s first organic breweries which was funded by community crowdfunding. Stroud also halted the travels of Dale Vince who parked his traveller caravan here and never moved on, creating one of the UK’s first green energy companies, Ecotricity, now the town’s biggest employer. Stroud’s Farmers’ Market was the brainchild of local resident, Clare Honeyfield, who combined food producers with local artists and craftspeople to create a unique formula for a multiple award-winning market which is still thriving 22 years on.

This influence has spread to local politics: the number of Green Party councillors sitting on the district council has risen from five to thirteen and the council became the first one in Europe to become carbon neutral and declared a climate emergency in 2018. In February 2022, it was ranked 10th out of 400 councils assessed for their work to tackle climate change.

For Stroud, perhaps the amazing power of local collective action and belief in local people can be traced back even further to William Morris and supporters of the Arts & Crafts movement who settled in Stroud and the Cotswolds in the late 1800s. They were controversial at the time, proposing that society should turn its back on mass industrialisation and focus on the local, cottage industry-style way of life. Perhaps Stroud’s green soul is a result of their influence which has been passed on through the years? So why not get that green community project going where you live? Who knows where it might lead or just how much of an impact you’ll have?

Caroline is the Creative Director of Green Spark Marketing. To find out more about the community spirit in Stroud, read ‘Stroud: a Town Changed by Community Action’ by Camilla Hale & Dominique Shead.