Trafford Green Hydrogen will use renewable energy to produce green hydrogen fuel for transport and heating by 2023. It is part of the Trafford Low Carbon Energy Park which includes one of the largest battery storage schemes in the UK.

Trafford Green Hydrogen is an industry leading project, that will use renewable energy to produce green hydrogen fuel for transport and heating by 2023. The development will have an ultimate capacity of 200MW, with the initial 10MW phase sufficient to decarbonise 6 million road miles.

The project is located at the former Carrington Power Station which ceased operation in the 1990s. The power station was a 240MW coal-fired station with the proposed Trafford Low Carbon Energy Park located on the former ash management area.

Greater Manchester has a target to achieve Net Zero by 2038, this requires a concerted effort across a number of different sectors and businesses. In reviewing how they can transition to low carbon operations, a number of potential options and barriers have been identified. In the case of hydrogen, the source, timing and cost of the hydrogen has limited the meaningful analysis of hydrogen as an alternative to fossil fuels. This project bring hydrogen into the region to enable businesses to plan for complying with Net Zero requirements.

Renewable energy to power the scheme will come from local solar energy combined with excess renewable energy from the grid, this will align with the Low Carbon Hydrogen Standard proposed by the UK Hydrogen Strategy.

Within the development, the site will include the electrolyser technology, which splits water to hydrogen and oxygen using electricity, compressors to reduce the volume of the gas, storage and refuelling points to enable use of the hydrogen. The hydrogen will then be transported by tanker to key locations in the region for further use. In the longer term, the hydrogen produced will be injected into the gas network.

An application for planning permission was submitted to Trafford Metropolitan Borough Council in August 2021. See video for the progress underway.

Greater Manchester Combined Authority, Trafford Council, Cadent, Electricity North West and Manchester Metropolitan University signed an MoU with Carlton Power to help move the project forward, and each have delivered on that commitment.

We have found the project teams required to deliver new energy projects are unlike legacy projects and therefore identifying and engaging organisations that can support is essential. 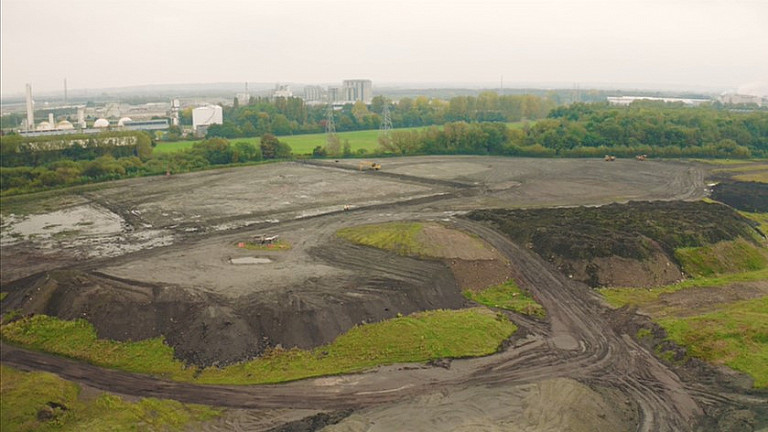 Aerial View of the Trafford site under construction Visual representation of the scheme
Inspired? Find out more