Woodmeadow Trust is a pioneering charity taking practical action to address the catastrophic decline in biodiversity in the UK. 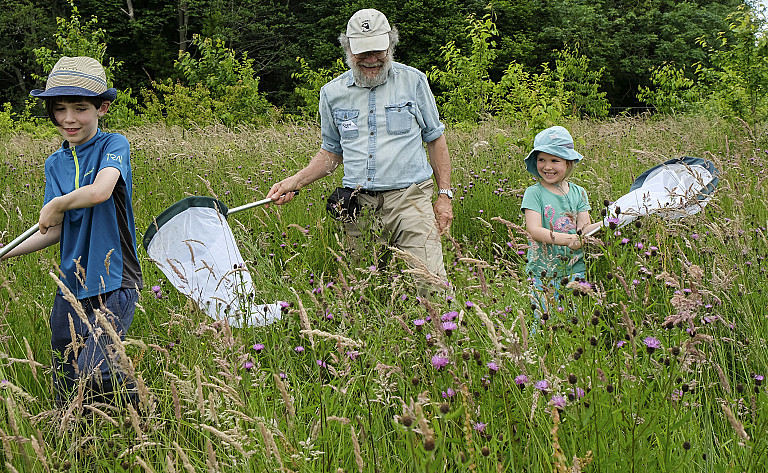 Logo of the Woodmeadow Trust.

A corner of the woodmeadow in June.

Our aim is to address the ongoing catastrophic decline of nature in the UK by creating and inspiring others to create biodiverse woodmeadow ecosystems.

Our first, huge accomplishment was to create our flagship site 'Three Hagges Woodmeadow' near York. Tenty-five acres of inhospitable, arable farmland has been transformed into a flourishing woodmeadow. Here we have created a mosaic of woodland and meadow habitat with plenty of 'messy edges' which is more biodiverse than either habitat would be on its own. Three Hagges Woodmeadow is now a thriving ecosystem, carpeted with wildflowers and an increasing number of mammals, reptiles, amphibians and birds.

In addition to our work at Three Hagges Woodmeadow, we are working to establish a national network of woodmeadows, inspiring others to establish and care for these rich mosaic habitats. Traditionally, woodmeadows have not been acknowledged in the UK, though similar habitats can be found in the form of orchards, churchyards, woodland glades, and some traditional parklands. However, in Europe, there are excellent examples of this ancient form of agriculture, where the field layer is used for hay and grazing, and trees and shrubs managed for tree-hay, fruit production and timber products. We are now working with over 30 other areas in the UK, helping them to develop their own woodmeadows.

As well as the biodiversity, recreational and educational value, mixed woodmeadows generate more biomass than a simple meadow or woodland system considered in isolation, resulting in significant carbon sequestration. With sympathetic management, woodmeadow produces the structural diversity that provides a haven for a wide range of wildlife, buzzing with insects, alive with birdsong and replete with the wildflowers and grasses they all depend on. Instead of being driven by a single goal, we focus on the ecosystem as a whole.

A nursery area near the Woodmeadow has been set up where seedy of local provenance, is being sown by volunteers and nurtured into mature plants to enhance the site with further species typical of meadow and ancient woodland.

A key part of our work is providing recreational and educational opportunities for local people. We now receive around 7500 visitors per year, and put on events such as Bioblitzes, scything workshops, musical performances and guided walks to bring the community and nature together.

Government, councils and businesses are beginning to acknowledge the severity of the twin climate and biodiversity crises affecting the world, and it is becoming easier to fund habitat creation thanks to innovations such as carbon offsetting, biodiversity net gain, and increased funding for tree planting.
However, too often biodiversity is forgotten in the rush to offset our carbon footprint, and opportunities to address other key challenges such as biodiversity declines and community engagement are squandered. As a result, many woodland creation schemes are unimaginative plantations, structurally uniform and devoid of woodland flora. Although effective at sequestering carbon, such schemes tend to be of limited value for people or wildlife.

Our advice to those seeking to create biodiverse habitats is to remember the adage "variety is the spice of life". Wildlife thrives where there is a rich mosaic of different habitats and conditions, and woodmeadows (also called wooded meadows, or woodland meadows) can support particularly mind-boggling levels of botanical diversity. Some European woodmeadows support between 60 and 76 plant species per square metre! Any combination of trees, scrub and wildflower meadow can be considered a woodmeadow, though various distinct forms of woodmeadow have developed in different cultures over millennia. These habitats comprise extensive messy interfaces between woodland, scrub and open meadow, and are typically managed through a combination of mowing and grazing, together with traditional techniques such as coppicing and pollarding.

Because woodmeadows require ongoing management in order to maintain their extraordinary biodiversity, they also provide a brilliant opportunity to engage volunteers and build a sense of community ownership. If we want people to truly engage with the climate crisis, what better way to start than by reconnecting people with their local environment? We believe that everyone deserves to have access to a local green space where they can lose (or find) themselves in nature, and our mission is to inspire and facilitate the creation of woodmeadows across the UK.

Woodmeadow Trust work with various councils, landowners, and community groups around the country to help them set up new projects. We run training courses at Three Hagges Woodmeadow and we are currently building an online map of projects, so that anyone in the UK will be able to find their nearest woodmeadow. We are also working on a series of guidance documents and case studies, which offer advice to those seeking to create biodiversity rich habitats.