Stroud District Council has put carbon neutrality by 2030 at the heart of its local area plans, including a focus on renewable energy and a proactive approach to onshore wind power. 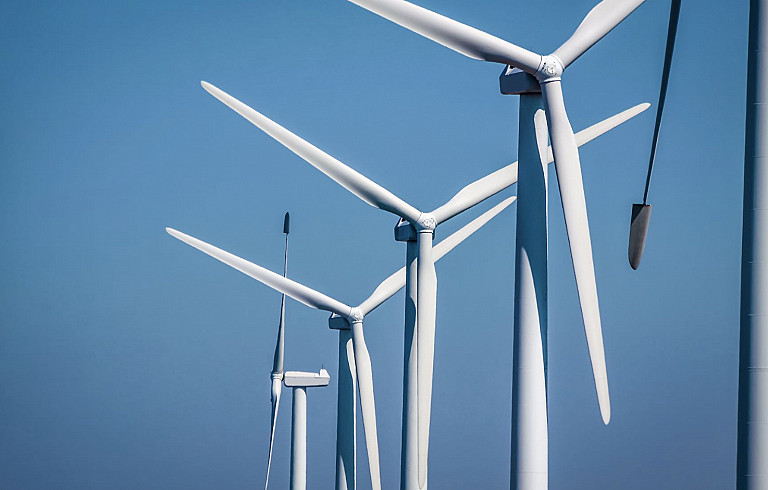 The climate benefits of renewable energy are well-known. The government has set targets for increasing offshore wind generation, but the UK needs more onshore wind and solar too. Onshore wind sites must be allocated through the planning process alongside other land designations in Local Plans.

Stroud District Council has put carbon neutrality by 2030 at the heart of its plans for the area, including a focus on renewable energy. National planning policy doesn’t support onshore wind, but Stroud District Council is taking a proactive approach. It is encouraging new wind and solar installations by identifying opportunities in the area as part of its Local Plan, though these areas of potential are still subject to other policies included in the Plan.

Renewable energy growth is explicitly linked to carbon neutrality in the authority’s most recent Local Plan.

Delivery policy ES2 outlines criteria for the development of renewable schemes, including:
- Developments are likely to be successful if they are in areas identified by the council as suitable for wind or solar in its ‘policies map’. This identifies all land with the technical potential for renewables.
- Developers of renewable energy schemes should engage with local communities as early in their project as possible. Support will be given to proposals which are led by or meet the needs of local people.

Identifying all land in the district with the technical potential for renewables was a key aim of the policy. Doing so ensures that onshore wind proposals are compliant with National Planning Policy Framework (NPPF) without limiting the future potential for onshore wind.

The NPPF sets very specific restrictions on wind development. It dictates that wind energy projects should not receive planning permission unless they are in an area formally identified as suitable by a local or neighbourhood plan. Wind proposals must also have the full backing of communities – a higher bar than is set for other developments, including fossil fuel extraction. This has resulted in few Local Plans proactively allocating sites for onshore wind. Site suitability is more flexible for solar than for wind.

In order to comply with the NPPF, Stroud District Council made sure it would have evidence to back its policy. In 2019 it commissioned the Centre for Sustainable Energy and Land Use Consultants to assess renewable energy opportunities within Stroud, including various scenario models up to 2040.

The result was a survey of all the potentially viable sites in the district. This functions as a technical evidence base underpinning the local plan. Without this assessment, the crucial policies map included in the local plan would not have been possible, significantly limiting wind expansion.

Some sites need special consideration – proposals within the Cotswolds Area of Outstanding Natural Beauty and the Severn Estuary will be considered, but only where the benefits of the development can demonstrably outweigh its harms.

National policy is still unhelpful – but can be changed:

Stroud developed its strong policy despite the unhelpful policies in the NPPF, but reform at national level would help all councils to boost onshore wind sites.

In July 2021, the UK government published its revised National Planning Policy Framework. Campaigners and commentators hoped that the existing barriers to wind would be removed, but this did not happen. The rules permit the continued extraction of coal if benefits ‘clearly outweigh’ impact, and the limitations on onshore wind remain.

Very few local authorities have functional policies for onshore wind, and this is likely to remain the case without change in the National Planning Policy Framework. Gathering the necessary evidence to justify suitable sites for renewable allocation is resource intensive, so this legal requirement is absent in many councils’ Local Plans, largely ruling out wind.

The second requirement – that wind developments have full local backing – is a discouraging influence on developers and sets a high bar that few applications overcome.

The ability of ambitious local authorities like Stroud to meet carbon targets that go beyond the national 2050 deadline is constrained by the lack of planning policies that facilitate, not hinder, renewables.

Reform of planning at a national level is necessary and councils should be proactive in seeking reform when the National Planning Policy Framework is reviewed (expected again in 2022).

Restrictions will vary in different locations:

Further barriers for other councils might include the proximity of potential sites to national parks, Areas of Outstanding Natural Beauty, green belts or other ecologically important sites (though Stroud’s example shows these can be appropriately accounted for). Sometimes tensions arise between increasing renewable energy generation and conservation concerns. Finding solutions to these is important, which will be facilitated by dialogue with stakeholders and robust evidence about any risks in sensitive locations

Urban areas may have less available land for standalone renewable energy generation and may need to impose minimum distance restrictions to houses for wind turbines. Community engagement will be important and sometimes roof mounted solar may be a better solution in urban settings.

Stroud’s renewable energy resource assessment noted that, as of June 2019, about 12% of energy produced within Stroud was from renewable sources. The council’s 2030 Strategy Master Plan, adopted in 2021, sets out the context, rationale and approach for tackling climate and ecological challenges. One of the strategic goals included in the Master Plan seeks to at least treble the proportion of renewable energy generation within the district from the current level of 12%.

For each type of renewable energy, the assessment identified what schemes (both community-owned and commercial) currently exist across the district, and what projects have received approval for future development.

Wind:
- Four wind turbines already in operation generating a total 3.5MW of energy (Sharpness Docs, Lynch Knoll, and two at Mountenays and Cherry Rock).
- There is technical capacity for wind generation of up to 336MW in the district, saving an estimated 198,017 tonnes of CO2 emissions a year.
- The greatest potential for future expansion of wind energy in Stroud is through small and mid-sized wind turbines.
- Three wind developments have received approval in the district: Partnership for Renewables turbine at Sharpness; two Resilient Energy turbines under a community benefit society model; and Ecotricity’s new Alveston wind park.

Solar:
- The assessment identified 7 ground-mounted solar projects that had either received consent or were already installed, with a total capacity of at least 68.4MW.

Hydropower:
- The assessment found Stroud has little capacity for hydropower, though historically the Stroud Valleys were powered by watermills. There may be limited opportunities for hydro-electric schemes in and around these mills.
Read more
Share this initiative
Inspired? Find out more