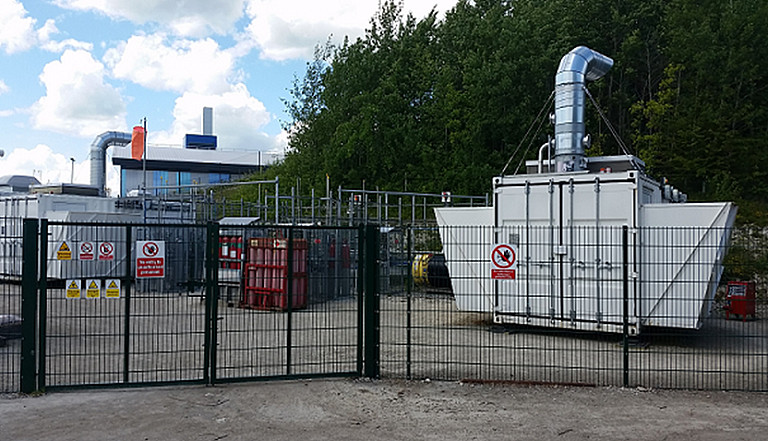 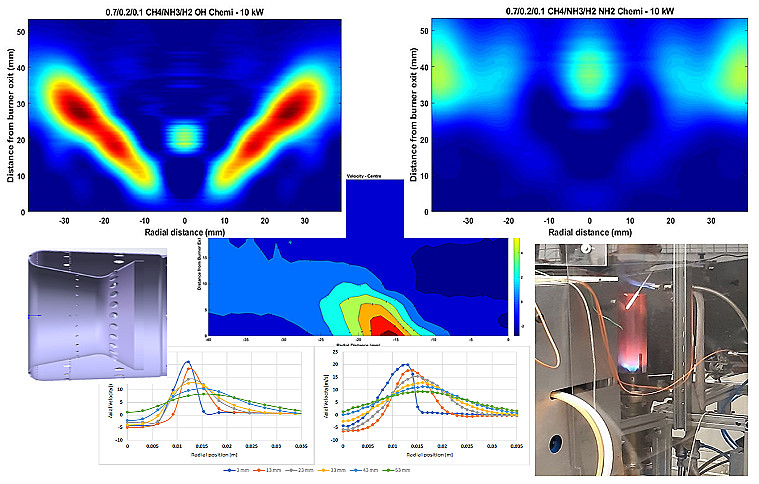 The aim of the Stored Ammonia for Energy (SAFE) initiative is to support the transition towards a zero-carbon economy using highly hydrogenated molecules such as ammonia. This research project is led by Dr Agustin Valera-Media from the Cardiff University Centre for Research in Energy, Waste and Environment.

The idea for the project came to fruition when members of our research group met Japanese researchers working on Japan’s Strategic Innovation Promotion Programme (SIP) at an international conference. SIP was a government research programme, with one of the key aims being the modern demonstration of a pure ammonia-powered gas turbine, sponsored to the tune of £22 million by the Japanese Government in 2014. Interest in ammonia came from its ability to act as an energy carrier that is cheaper for long-term energy storage and transportation when compared to hydrogen. Like hydrogen, ammonia is carbon-free and can be manufactured with renewable electricity and renewable feedstock (nitrogen from air and hydrogen from water).

Cardiff University saw a potential to implement ammonia outside of Japan and began their research in 2015. This resulted in a collaboration between Cardiff, Oxford, Siemens Digital Industries Software and Rutherford Appleton Laboratory, Oxfordshire - and the world’s first internal combustion engine-based green ammonia demonstrator.

The Stored Ammonia for Energy (SAFE) initiative began in 2021. This was a £2m initiative funded by the Engineering and Physical Sciences Research Council, the main funding body for engineering and physical sciences research in the UK, for our four-year project. SAFE is a partnership between Cardiff University, University College London, and Imperial College London, with Cardiff leading the project. Since the start of the project, ammonia has grown into a worldwide research topic with our other collaboration partners including ESPOL in Ecuador, University of Orléans in France, and Sandia National Laboratories in the USA, to name a few.

The SAFE project aims to provide the world’s first demonstration of a humidified ammonia/hydrogen gas turbine through retrofitting the combustor of a 50kW micro gas turbine currently powered by kerosene. To transition this device from carbonaceous fuels to run green ammonia/blends gas, we are working closely with industry partners to manufacture a new 3D printed combustor. Our industry partners include Siemens and Bristol-based HiETA Technologies, which specialise in the use of Additive Manufacturing (metal 3-D printing), National Instruments to support programming the instrumentation and Special Metals for development of high temperature metals, suitable for ammonia/hydrogen combustion environments.

The project must be broken down into stages, so we first started by modelling and burner design. You can test the burner separately to the instrumentation and the trigeneration cooling stage, before combining all of these aspects together. This is becoming a tried and tested method with both our projects and recent projects in Japan and the US.

Of course, having a great team with a broad range of specialties helps – such as modelling, practical/experimental skills or electrical/technical skills. In a project of this scale, there is so much to think about and cover.

The successful implementation of a new technology such as ammonia is not only dependent on its physical/technical properties, but also on societal factors, including public acceptability. Andrea Guati-Rojo from our research group has spent the last few years looking at public perceptions of ammonia as a fuel. She conducted the first empirical ‘public perception’ study about ammonia as a fuel through surveys with the general public in Mexico (n=563) and the UK (=357). The research aims to provide an understanding on how the public perceives green ammonia as a fuel, enabling future stakeholders and governments to consider public’s perspectives in the development of technologies fuelled by 〖NH〗_3.

Health and safety is another example of something learnt with experience. Pressurised hydrogen, such as that stored in containers, has an explosion risk, and both ammonia and hydrogen can be toxic to humans. Having the right health and safety training before undertaking a project such as this is vital.

Despite all the attention ammonia is now receiving, it is still a relatively new fuel and every week, we learn something new. We document our findings in research papers with the goal that others can make use of the information we are collecting. When I first started working with the research group in 2017, there were a handful of publications discussing ammonia in gas turbines, and now there are too many to keep track of.

A good example is how decreasing NO (nitrogen oxide) emissions has been a big topic of focus in the community, but under some conditions, high N2O (nitrous oxide) can also be produced. For the same volume, N2O is 300 times worse for GWP (Global Warming Potential) than carbon dioxide, but until this year, there was no record or data relating to it. Now, after some experiments and modelling, we know exactly how, why and under which conditions this pollutant is produced and how to prevent it. But it is difficult to recommend one specific lesson learnt from all the research that we have undertaken on this novel fuel.

A key measure of success is the research output and lessons learned as a result of this project. If others connect and learn from this demonstrator and are also inspired to implement ammonia as a fuel, we would consider the project a great success. As we are seeing more interest from local companies like Reaction Engines, that are keen to create their own implementations of ammonia power devices, we believe that Wales is becoming an area of specialty for ammonia as an energy vector.
Read more
Share this initiative
Inspired? Find out more