Piloting a collaborative and natural approach to mitigating flooding on the River Clywd. 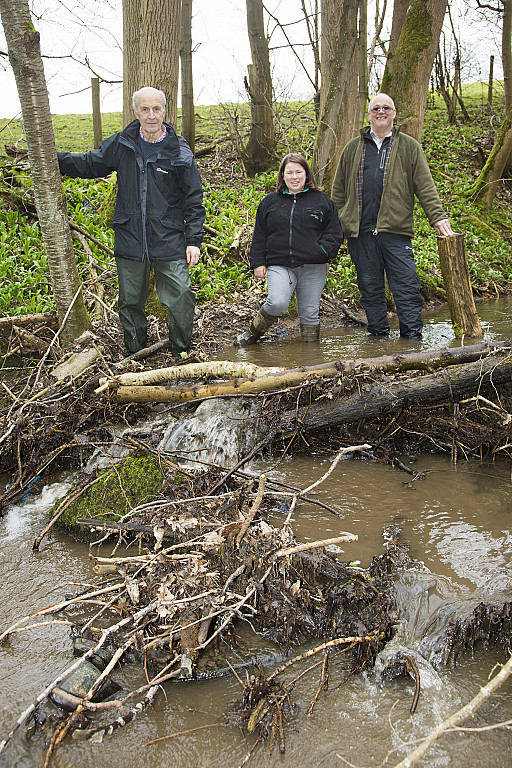 In January 2017, a collaborative project began on the River Clwyd in Denbighshire with the aim of piloting natural measures to prevent flooding. By July 2020, a series of innovative and sustainable measures had been implemented over 8,000 hectares by a team dedicated to mitigating the risk of flooding in the area.

The £330,000 project was made possible by rural development agency Cadwyn Clywd’s successful bid to the Welsh Government’s Sustainable Management Scheme. The project team, made up of Cadwyn Clywd, Natural Resources Wales, and local farmers, used the concept of natural flood risk management to understand the river’s potential flood risks, and then how to manage the land and river catchment areas accordingly to try and mitigate and control flooding.

Traditional, hard-engineered flood defences, such as concrete, have a high carbon footprint so natural and sustainable methods were used, which lowered the carbon impact and improved biodiversity in the area.

The project centred around using plants, trees, and other natural materials to slow the flow of the river. The team increased vegetation levels around the river by planting and restoring small woodlands and hedgerows, as well as creating wood ‘leaky’ dams, to slow down the flow of water from rainfall into the river. This reduced the sudden surges downstream that cause flooding.

Over 10,500 metres of hedgerow were either regenerated or created during the project, in addition to three hectares of new woodland and 1,400 new trees, most of which were planted by community volunteers. A further five hectares of existing woodland were enhanced, either by increased planting or by animal stock exclusion.

Work was also carried out to restore the riverbanks themselves. 19,000 metres of fencing was erected to protect the riverbanks from being damaged by animals and to reduce run-off, which in turn improves the quality of the water.

The project highlighted the opportunities for collaboration between farmers, landowners, and the public in creating habitats, reducing flood flows and improving water to benefit the local area. It has delivered a new, longer-term solution to the flooding issues effecting people and businesses in the area.

My advice would be to always look for opportunities to collaborate on climate change projects. By engaging with different organisations with the same common goal, and embracing the enthusiasm of the community, we were able to combine efforts, play to each other’s strengths, and become a catalyst for change in the way we manage flood risks in Wales.

Local charity, Petrus Community, is supporting people locally through horticulture, to improve their health and wellbeing.

Creating Building Energy Decarbonisation Plans (BEDP) and toolkits to map out and measure clear pathways for all partner organisations to become carbon neutral by 2038.

The meter platform enables the council to measure and report on energy usage to all the stakeholders of their buildings, encouraging behaviour change and helping to reduce its carbon footprint.