Energise Barnsley is the largest local authority and community energy solar PV and battery storage project in the UK. 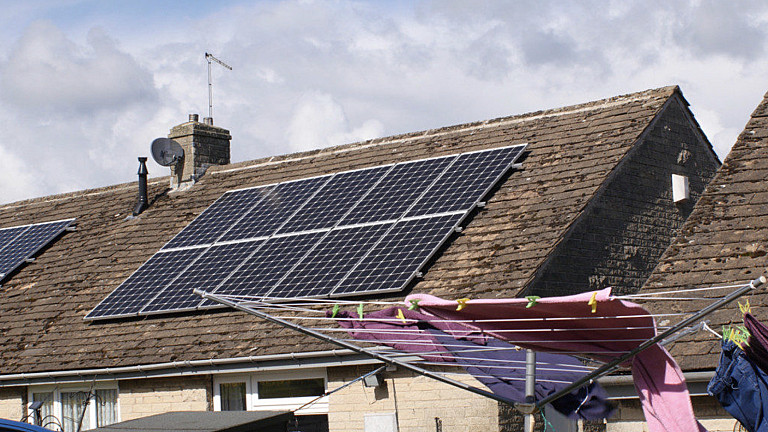 Local renewable energy installation will form a vital part of the rapid transition away from fossil fuels needed to meet the UK’s emissions targets.

Barnsley is home to the UK’s largest community energy project. This has delivered solar energy to hundreds of vulnerable households across the town as well as reducing their energy bills. Before the project, 9,000 households in the council area suffered from fuel poverty – meaning that they couldn’t afford to keep their homes warm enough within their incomes.

Now hundreds of homes have been equipped with solar panels, batteries, and smart monitors which allow owners to store electricity and monitor and manage their energy use. The Barnsley model builds the resilience of communities to events such as fuel bill rises – it is centred on the principle of community self-generation, self-storage and self-consumption.

The project is the outcome of a partnership between Barnsley Council and Energise Barnsley, a social enterprise set up by and with the council. Work began in 2014.

Costs of solar are falling:

The business case for Barnsley was challenging due to the expense of renewables when the scheme was launched. The cost of solar batteries, for instance, was £6,250 per unit, but costs have since fallen dramatically. The economics for similar projects are vastly improved now as solar technology cheapens and retail tariffs rise.

A related key lesson is that the combination of solar PV panels with batteries provides best value for residents, as opposed to either panels or batteries alone.

Councils can no longer take advantage of the Feed-in Tariff scheme, which closed to new applications in March 2019. Energise Barnsley built itself around the tariff as the main income generator. This has been replaced by the new Smart Energy Guarantee (SEG), so a route to export energy to the market still exists. Yet Smart Energy Guarantee subsidies can fluctuate and are typically lower than the Feed-in Tariff.

The lack of a stable guaranteed subsidy makes it harder to replicate the scheme. For new projects to be commercially viable, other avenues must be found. Energise Barnsley is exploring options that rely on demand side response, peer-to-peer trading, and the government’s ongoing Renewable Heat Incentive. Community Energy England, Green Alliance and new online forum PowerPaired are all also looking into alternative models for local authorities.

Communities must be helped to fully understand projects and the benefits they will deliver. Communication should be consistent and clear, making considerations for tenants and homeowners of all ages and abilities.

By spring 2021, the original 321 home installations had produced 5,513MWhs of energy, saving a collective £278,844 for tenants on electricity bills and 2,922 tonnes in reduced CO2 emissions. Over the project lifetime, a massive 18,000 tonnes of emissions savings are predicted.

The Barnsley Solar Bond community fund has helped run healthy cooking courses for those on a low income, paid the salary of a community farm manager, supported the local Age UK centre, covered replacement playground equipment, and contributed towards neighbourhood revitalisation efforts such as flowerbed planting.

In 2021, Energise Barnsley awarded a £20,000 contract to the Community First Credit Union, who will work to provide debt support, loan services and budgeting advice in order to help local people manage their critical rent, council tax and utility bills. Overall, an estimated £400,000 of surplus income generated via the solar Feed-in Tariff will be put back into communities over the project’s lifetime.

As Energise Barnsley has expanded its projects and aspirations for local people over the years, employment opportunities have also opened up. The new project announced in July 2021 will train local contractors to install solar PV systems and create six new long-term jobs.
Read more
Share this initiative
Inspired? Find out more