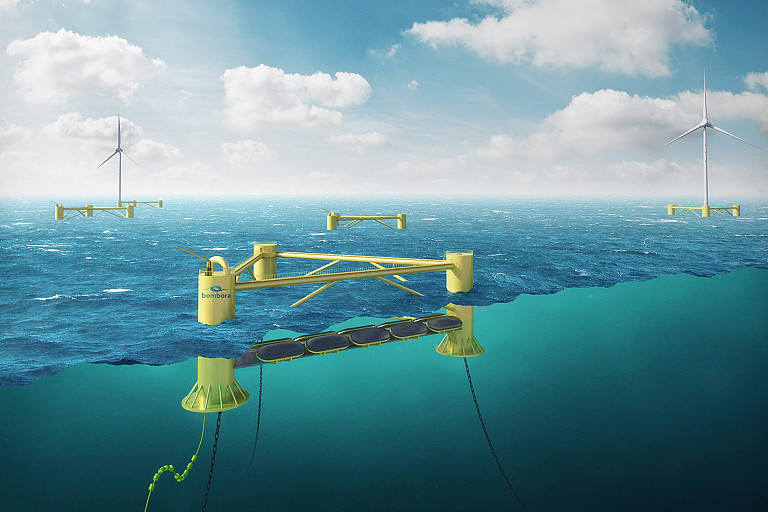 Bombora is an award-winning ocean energy company founded in 2012 in Australia. In 2017, we decided to set up our European operations in Pembroke Dock, launching a project to build a 1.5MW utility scale wave energy converter to support the renewable energy transition.

Bombora’s mission is to develop a new clean energy technology that will help society access a larger portion of the renewable resources provided by nature in a way that is economically viable. It’s being constructed and will be commissioned in May 2022. It will be in operation for nine months, with an aim to operate throughout the winter season, because this is when the waves are most energetic. The technical objective of a wave energy converter – and this has been a big challenge – is the merging of survivability and performance. A device must extract energy from the waves under normal operating conditions and survive occasional storms.

mWave will be positioned at East Pickard Bay. It has a communications cable which will sit on the seabed and run from the device to shore at the bay. The cable will run to an onshore control station, screened from view, which sits 275m from the coastal footpath.

While we cannot say clearly the carbon saved by our work, we can make educated assumptions. For example, the raw materials needed to make the device are a key contributor to embodied Co2 in a project, so it makes a big difference whether it’s made of steel or concrete because concrete can’t be recycled and has a large embodied Co2 footprint. Although steel has a larger Co2 footprint to manufacture, it can be fully recycled, so you recuperate a significant amount of the carbon footprint. Another contribution is in the operation and maintenance of the device – you need a vessel to go and carry out maintenance; the vessel burns diesel and that contributes to emissions.

Furthermore, this is a demonstrator, so it has a short lifetime. But for commercial projects, it’s typically a 25-year lifetime, and you must calculate all the Co2 that’s going to be needed to run the device. The objective is for this number be very low compared to fossil fuels, and low even compared to other renewable technologies. In terms of the payback period, it depends on what you’re comparing it with- how dirty your grid is. The UK grid has a major contribution from combined cycle gas turbines – so that’s a fossil fuel - but also has a significant contribution from wind and solar. I use the Gridwatch.co.uk site that shows you how clean or dirty the UK grid is and what technologies are contributing to that.

My advice to others would be to be bold! Try new things and take failures as learning opportunities. The climate crisis is urgent, and that requires bold action and decisive commitment.

Bombora is committed to engaging with the community and has built important relationships with organisations that are local to the project – colleges, universities and institutions that have helped contribute to the technology. And the most important group of stakeholders are those who will have the device in their backyard. We consulted with the Milford Haven Port Authority, Friends of Pembrokeshire Coast National Park, groups of people who use the coast recreationally - such as local surfers - and Pembrokeshire residents in general. Pembrokeshire Coastal Forum and their Marine Energy Test Area Project hosted public exhibitions; we held events in Castlemartin, Angle, Pembroke Dock, and Dale, where we met with the local community to discuss the project. There was naturally a bit of suspicion at first, but there was also a lot more positive engagement – people were keen to ask some very good questions, and I think we were able to allay their concerns.

The device is equipped with pressure, humidity, and temperature sensors, so we’ll have a live stream of data during the entire deployment process. It’s a full-scale demonstrator of the technology, so if it survives – and absorbs enough wave energy to be economically and technically viable – that’s the proof we need to go further with our commercial project. We then need the economy of scale to start working to drive the price down to reduce the LCOE (Levelised Cost of Electricity).
Read more
Share this initiative
Inspired? Find out more