More wind farms forecast in the push for greener energy. 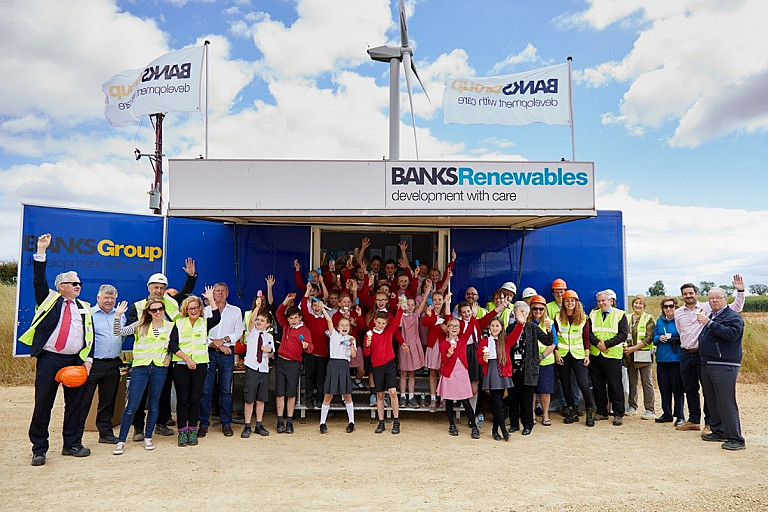 Banks Renewables considers itself part of the community.

A renewables company has pledged to increase the number of onshore wind farms it owns and operates to generate even more clean energy for the North East region.

Banks Renewables takes what it calls a ‘development with care’ approach and puts sustainability and environmental responsibility at the core of its business.

The firm has ten wind farms across North East England and Scotland, which have the capacity to generate 224MW of clean green electricity. To date the wind turbines have helped to cut carbon emissions by hundreds of thousands of tonnes.

Banks Renewables, a family-owned company, is one of the UK’s leaders in the onshore wind sector and has ambitious plans for more renewable energy generation and storage. It has a strong North East supply chain to help it help those plans forward.

As well as generating substantial amounts of clean green electricity, the wind farms also create real financial benefits for the communities where they are based.

The firm plans to invest in environmentally sustainable best practice across its entire business in the future. Its coal and fireclay surface mines already have considerably lower greenhouse gas emissions than imports from abroad.

*Thanks to NEECCo (www.neecco.org.uk) and to North East England Chamber of Commerce (www.neechamber.co.uk) for case study information.

Full environmental studies were carried out and planning permission granted by all the relevant local authorities before the onshore wind farms were built. Banks has a great working relationship with both the councils and the communities around its wind farms.

The firm also has community funds associated with all of its renewables project administered on our behalf throughout the UK by the County Durham and Darlington Community Foundation. Last year our the Fund awarded more than £353,000 in grants to 100 separate community groups and environmental projects.

In recent years Banks has had to move away from new onshore wind farms based in England due to changes in Government policy which made it very difficult to gain planning permission for onshore, as opposed to solar projects or offshore wind - despite the national clean energy agenda.

Banks Renewables is now concentrating on new onshore wind farms in Scotland where it is much easier to gain planning permission.

Amount of power generated (more than 630,000 MWh of electricity which displaced 621,787 tonnes of CO2e from the UK’s electricity supply grid).
Read more
Share this initiative
Inspired? Find out more