Restoration at Tullychurry Forest back to peatland following harvesting, is providing learning from restoration techniques as well as providing carbon sequestration and biodiversity benefits to a neighbouring internationally designated site. 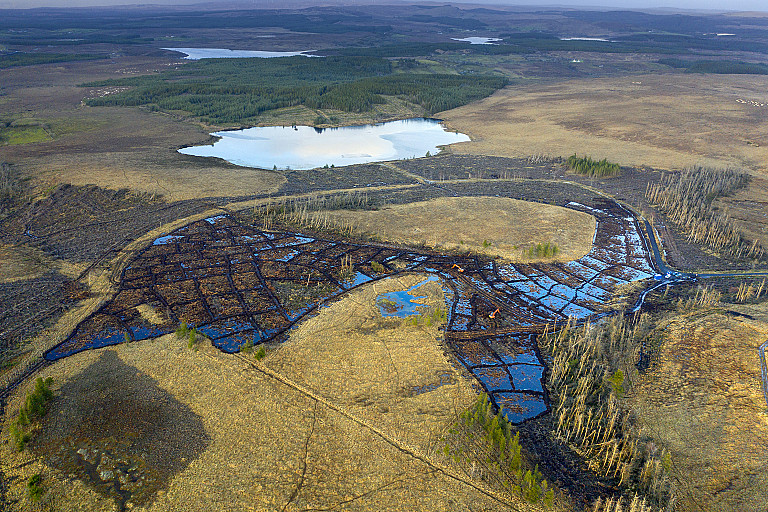 Tullychurry site post-harvesting and before restoration. 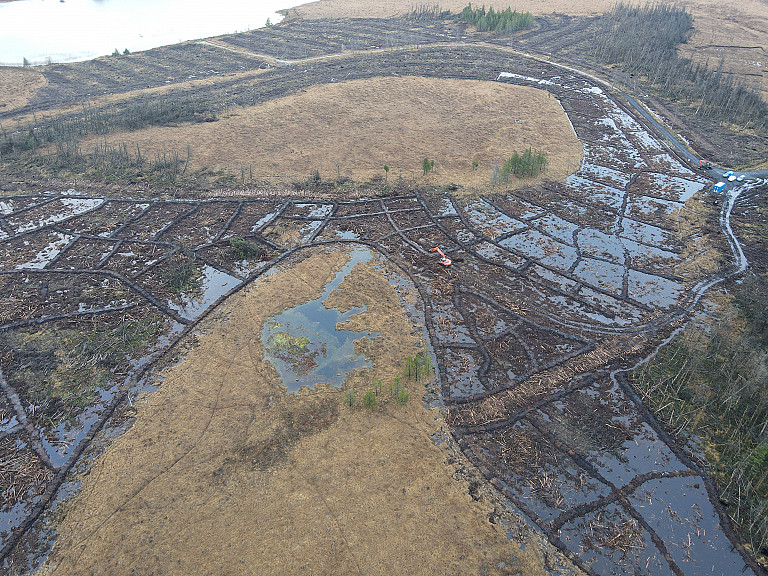 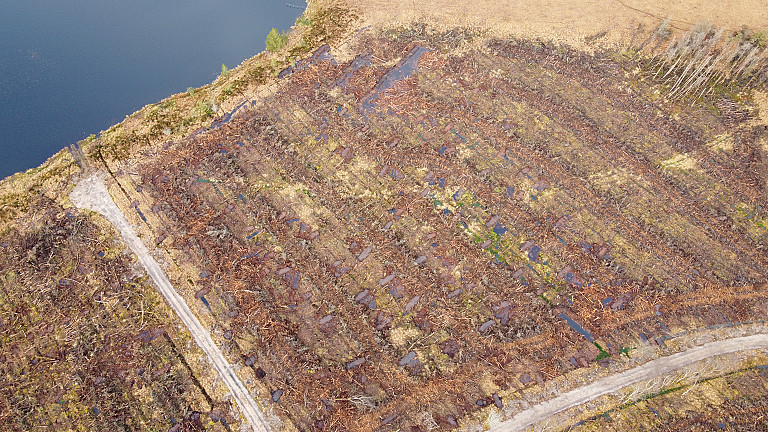 Peat dams blocking drains and brash mats in part of the site.

The Source to Tap project is funded via INTERREG VA managed by SEUPB with match funding by the Department of Agriculture, Environment and Rural Affairs and the Department of Housing, Local Government and Heritage. The €4.9M partnership project is led by NI Water and includes Irish Water, Agrifood and Biosciences Institute (AFBI), Ulster University, The Rivers Trust and East Border Region. Working together the partners are exploring sustainable cost-effective solutions to improve water quality in the cross border drinking water catchments of the Erne and Derg.

One solution was trialled in the Peat Pilot led by NI Water with Ulster University. This restored an area of afforested peat back to peatland by trialling a new technique called cell bunding.

The site itself is located at Tullychurry Forest in Co. Fermanagh, and sits between two lobes of Pettigoe Plateau, which is a designated Ramsar site, Area of Special Scientific Interest (ASSI), Special Protection Area (SPA) and Special Area of Conservation (SAC). The SAC is 1,270 Ha, making it one of the largest expanses of blanket bog left in Northern Ireland. Of special scientific interest are marsh fritillary butterflies, Greenland white-fronted geese (in the winter) and hen harriers, which regularly hunt over the bog. The restoration work has increased the area of open bog and re-established habitat for breeding birds. It will aid the endangered golden plover, whose predators will have less cover.

It has also helped us to learn about the use of the cell bunding technique to re-wet peatland. One of the challenges at the site was that it was originally planted with lodgepole pine in the 1960s using a ridge and furrow pattern allowing water to escape from the site. A solution to allow the water table to rise evenly encouraging the formation of sphagnum mosses was required. The site was split into three different areas with different techniques used in each to aid learning from the pilot.

On 6.13ha 145 cell bunds were constructed. These are low watertight peat walls, placed in grids (or cells) to prevent water from escaping. A total of 237 peat dams were used to block both drains and brash mats (where they were acting as drains) on 9.67ha. Finally, on a 5ha control area, minimal work was undertaken although three drains were blocked with peat dams and a 531m cell bund wall was constructed, which blocked 15 brash mats and two drains.

As well as undertaking the physical works, five different types of areas are being monitored by Ulster University using shallow groundwater dipwells to assess water table recovery and the dissolved organic carbon values in each area.

The peatland is now wetting up again, with sphagnum and heather starting to re-colonise. This will provide carbon sequestration and biodiversity benefits that will increase over time.
Indeed, the cell bunding technique has already been used at another restoration site, the nearby Lough Bradan reservoir.

Before we started the work on the ground we researched which technique would work best on our site and we were inspired by the work done in Cumbria on cell bunding.

Despite carrying out surveys using Global Positioning System (GPS) and unmanned aerial vehicle (UAV), ground-truthing was very important because the brash often mimicked drains making it appear that there were actually more drains to block than were present.

It was important to get the relevant authorisations and licences in place well before work started and to liaise with others regarding plans for the sites to ensure everyone has the same understanding and expectations.

It is important to measure the success of the restoration work by recovery of the water table. Monitoring dipwells were installed on some of the areas before construction work began but in the areas where the diggers were moving, it was necessary to wait until construction work was complete before staff were able to install the remaining dipwells. We were fortunate a heavy frost allowed staff to walk on the bund walls and install the dipwells. Thought needs to be given to how the dipwells can be installed before the work is completed.

If funding had allowed we would have covered the cell bund walls to protect them from damage until the sphagnum starts to colonise the bare peat.

Experienced digger drivers who are well briefed on the requirements for the different areas of the site and understand the brief are essential.

Weather conditions can change very quickly on an open bog area and appropriate clothing and equipment should be used at all times.

Walking across the site was very difficult with forestry debris and brash left after felling. Health and safety issues on the site have meant that it has been necessary to install paths with markers and to use two-way radios and employ a 'buddy system' at the site to enable safer access to the monitoring dipwells.

We have learned that it would be preferable to install the cell bunds and seed the cells with sphagnum as you work across the site. Once the cells start to 'wet' up it is difficult to regain access to the cells.

One of the challenges has been a very dry spring which has meant the cells became quite dry in some areas. It is important to be patient with peatland restoration and allow time for nature to play its role in the recovery of the site.