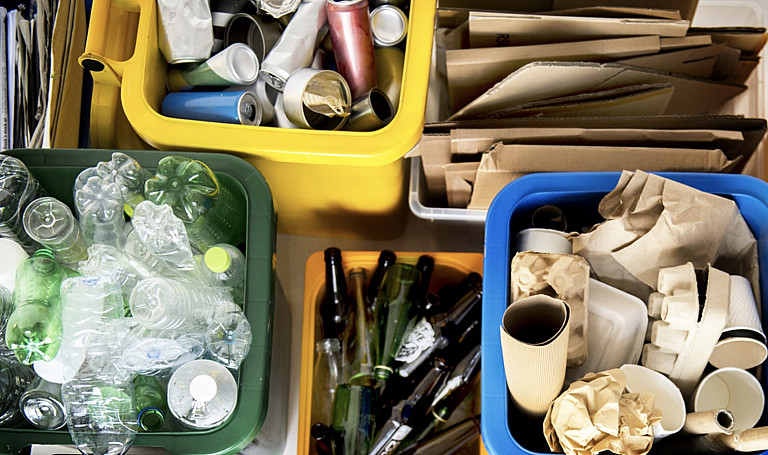 Waste is a climate issue due to the emissions caused in manufacturing products that are then thrown away, and due to the methane gases released at landfill sites

The average household in Three Rivers generates around 1,000kg of waste per year. However, due to the efforts of Three Rivers District Council, an impressive 64.1% of this waste is recycled – the highest rate in England for 2019/2020. The Hertfordshire council links its success to offering a wide range of recycling services, good communication with residents, and co-operation with neighbouring councils.

Simple, logical changes have improved Three Rivers’ recycling rates in recent years. Recycling and food waste is collected weekly, whereas non-recyclable waste is collected every fortnight in smaller 140 litre bins (the average wheelie bin used by councils is 240 litres). This has resulted in residents putting less rubbish in their general waste bins.

Three Rivers District Council has also gone beyond these basic steps. It operates a number of services for specialist waste items including clinical medical waste collection, a reusable nappy discount scheme as part of the WasteAware group, and free home textiles collection.

An assisted collection service supports older residents and people with disabilities who cannot take waste containers to the edge of their properties for collection. The council also offers talks and support on recycling and waste to schools and community organisations.

The council has further ambitions to cut waste in the area. It recognises that reducing, reusing and repairing are more effective ways to avoid sending waste to landfill or incineration than kerbside recycling collections alone. The council will therefore be moving towards a circular economy in its Climate Change and Sustainability Strategy.

In addition, some councils oversaw an increase in waste being sent to landfill or incineration as an emergency response to manage the increased levels of household waste experienced during coronavirus lockdowns.

One reason for poor recycling is that, in England, many councils are locked into long-term waste incineration contracts which often include minimum tonnage guarantees. These undermine the economic incentives to recycle, so councils with high incineration rates are more likely to have low recycling rates. UKWIN is a campaign group that can offer help for authorities to move away from incineration.

A key lesson from Three Rivers is that separating food and garden waste is a reliable way of increasing levels of food collected, thereby improving recycling rates.

Three Rivers is convinced that higher levels of recycling are possible. But this will only be possible if manufacturers co-ordinate materials in production. This would also require UK government intervention in the form of regulation or tax incentives, if authorities are to eliminate waste at a local level.

Claiming the title of most prolific recyclers in England has been excellent publicity for the council, a cause for pride within Three Rivers that has enhanced the authority’s reputation.

The food waste collected in the district is converted into electricity and fertiliser at a local anaerobic digestion plant, contributing to renewable biogas energy generation and providing a secondary benefit from waste reduction and recycling.
Read more
Share this initiative
Inspired? Find out more