Leading a UK project, Lancashire Wildlife Trust are working with partners to 'farm carbon' and restore the carbon storage capacity of peatlands.

FOR PEAT'S SAKE!
Peatlands are important habitats for lots of specialised wildlife and they play a huge role in the fight against climate change. Peatlands cover only 3-5% of the total land area in the Northern hemisphere, but contain around 1/3 of global soil carbon. They are the world's largest carbon store, holding over 550 gigatonnes of carbon. That's more than twice as much as the world's forests!

However, this carbon can get released for various reasons often linked to agriculture. Land can be drained and burned to plant crops and other uses, devastating carbon storage capacity. Peat is also sold as compost, removing it from precious ecosystems to improve productivity elsewhere. When peatlands are damaged, the carbon locked up inside them gets released. Currently, peatlands are releasing more carbon than they store, as well as releasing methane which is an even more potent greenhouse gas.

THE CARE-PEAT PARTNERSHIP
Care-Peat is a partnership project, with nine partners working together to restore the carbon storage capacity of peatlands in Northwest Europe. Our main goal is to demonstrate innovative solutions for peatland restoration, involving local and regional stakeholders.

The UK element of the project is led by Lancashire Wildlife Trust with partners Manchester Metropolitan University and BeadaMoss. Lancashire Wildlife Trust are testing different combinations of planting techniques at Little Woolden Moss nature reserve in Salford. This allows us to see which combination has the best potential for speedy re-vegetation of degraded peat and thus reduced greenhouse gas emissions. We are also creating a pioneering carbon farm on a former agricultural field next to our Winmarleigh Moss SSSI nature reserve.

HOW DO YOU FARM CARBON?
We removed 10cm of turf and enriched topsoil to reveal the peat underneath. Drainage ditches were blocked up and we installed 'bunds' or low walls of compacted peat. This raises the water table to re-wet the site. We used more bunds to divide the site into eight sections, and planted over 150,000 plugs of sphagnum moss as a permanent cover crop. The moss forms a blanket over the peat, helping to retain its moisture and reduce emissions. BeadaMoss are a sub-partner for the project, providing expert knowledge to the design of the pilot scheme and growing the sphagnum moss required.

We are also working alongside Manchester Metropolitan University to monitor the greenhouse gas levels and see how quickly this carbon emitter can become a carbon store. CO2e emissions from the site have already dropped by 90%, from 22 to 2 tonnes of CO2e. We predict that by the end of the Care-Peat project in 2022, 7800 tonnes of carbon emissions will have been saved.

This project will provide results and answers on how best to protect our peatlands across the UK and beyond. The most beneficial techniques can be shared by those working to protect other peatland sites with an incredible potential for reducing local carbon emissions.

Pilot schemes teach us what works, as well as what doesn't work. Both are vital pieces of information to develop climate resilience. By trialling and demonstrating different ways of restoring peatlands, we can find out which are the most efficient.
The carbon farm pilot is looking to find ways that peatlands can be restored whilst also remaining financially viable for landowners.

We are taking monthly greenhouse gas readings to monitor emissions from both the carbon farm and the planting trail sites, observing how quickly the sites can be transformed from carbon sources to carbon sinks. We are also comparing the efficacy of different combinations of plants in the speed of re-vegetation for damaged peatland sites and the associated reduction in greenhouse gas emissions.
Read more
Share this initiative 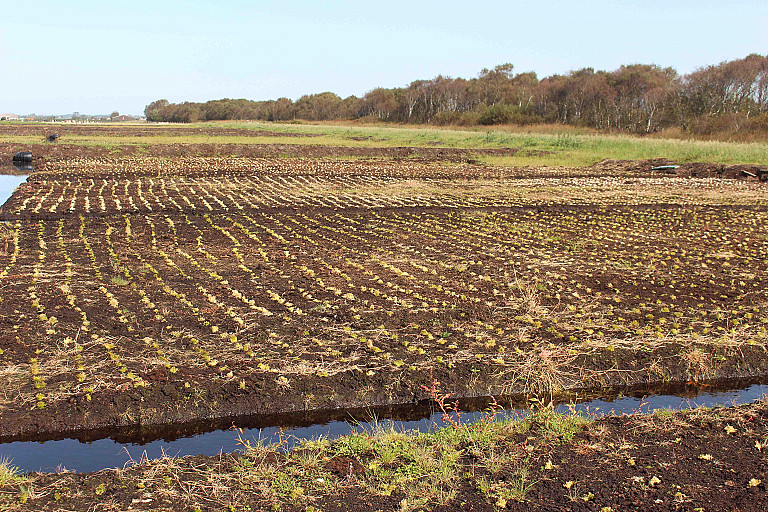