Stroodles and Bywaters teamed up with Thomas Franklin and his Scout Group to support a new initiative to Make A Splash in the fight against plastic pollution through a new scout badge, for their camp blankets. 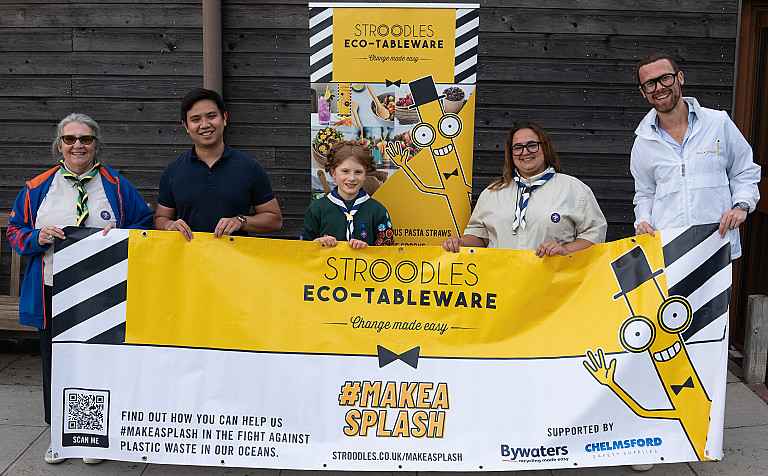 #makeasplash in partnership with Bywaters and Stroodles.

Stroodles and Bywaters teamed up with Thomas Franklin and his Scout Group to support a new initiative to Make A Splash in the fight against plastic pollution through a new scout badge, for their camp blankets.

Every year 8 million metric tonnes of plastic enters our oceans, causing lasting damage to biodiversity and ocean ecosystems. This problem resonates across industries, establishing a shared ambition for real and drastic change. This ambition to tackle this crisis has brought together an unlikely collective, with the aim of inspiring the next generation to make a more positive impact on the planet. Working in partnership, Stroodles, The Eco-Tableware company famous for their pasta straws, and Bywaters, a Leading recycling company in London, have teamed up with Thomas Franklin - a 9 year old environmentalist from Devon - to support his ambitions of making scouts more sustainable.

Thomas’ passion for environmentalism has driven him to push for change across the Scouting movement, increasing emphasis on actions for the environment. In reply to Thomas’ campaign Bear Grylls, Chief Scout, commented “I totally agree we need to help more young people understand this issue and take positive action.

Thomas has been a brand ambassador for Stroodles since entering their “Sail Design Competition”, as part of their “#MakeASplash campaign in support of charitable organisation Clean Ocean Sailing in early 2021. Thomas and Stroodles’ aligned values inspired a plan to introduce a two-tiered scouts badge. The overarching aim is to educate and inspire the younger generations to understand the threat plastics pose if not handled correctly, ensuring that young people have a better understanding of biological preservation than current generations. Maxim Gelmann, Chief Stroodle and Founder of Stroodles, added “We are so so happy to be partnering with Thomas and Bywaters and together with the Scouts inspiring so many people about how easy and fun sustainability can be! We are excited to create many many Ocean Heroes together all across the UK and making a splash. Happy stroodling and litter picking!”

On 16th September, the 1st Sid Vale Cub Scout Group launched the scheme in partnership with Stroodles and Bywaters. After undertaking a Beach Clean in Sidmouth, they became the first scouts to earn the new ‘Ocean Helper’ and ‘Ocean Hero’ sustainability badge. It is hoped that the successful implementation will act as a springboard to catapult the campaign nationally. With a reach of over 348,000 male and female Scouts in the UK, and over 153,000 adult helpers, the scheme has the potential to create a strong, lasting impact on the fight against ocean plastics.

In response to the launch of the scheme, Thomas said “I want the whole of scouting to be plastic clever and do more to help save our world. All the young people in scouting can make a huge difference to the environment and be an example to others. Scouting needs to take action to save our planet now!"

Anyone can perform a litter pick, it only takes the drive to get involved. That is the simplicity of the project, as everyone can make a difference to the volumes of plastics making their way in to our waterways each year. However this campaign looks to go beyond just dealing with the effects of littering and inspire real behavioural change in the younger generation that will ensure that there is less litter to clear in the future.

We have been campaigning for a reduction in ocean plastics for years. This includes our project alongside Sky Oceans where we helped craft a whale from 2500 recycled bottles, representing the amount of plastic entering the oceans each second. We have been heavily focused on litter picks and beach cleans alongside our corporate clients, however this project targets the future through education and inspiration at a young age.

All of the equipment for the first event was donated by Bywaters and Cheltenham Safety Supplies. This included PPE and litter pickers, as well as rusable tubs to collect the litter, reducing waste from the use of bin liners.

As part of the initial event Bywaters, Stroodles and the regional scout master all delivered speeches to the scout troop. These helped to educate and inspire on the issues surrounding ocean plastics.