School uniforms can last a long time if cared for using eco-friendly products, then it can be passed to another family when your child has outgrown it. It is a win-win for the environment and for families. Volunteers from Antrim School Uniform Scheme with our Mayor. 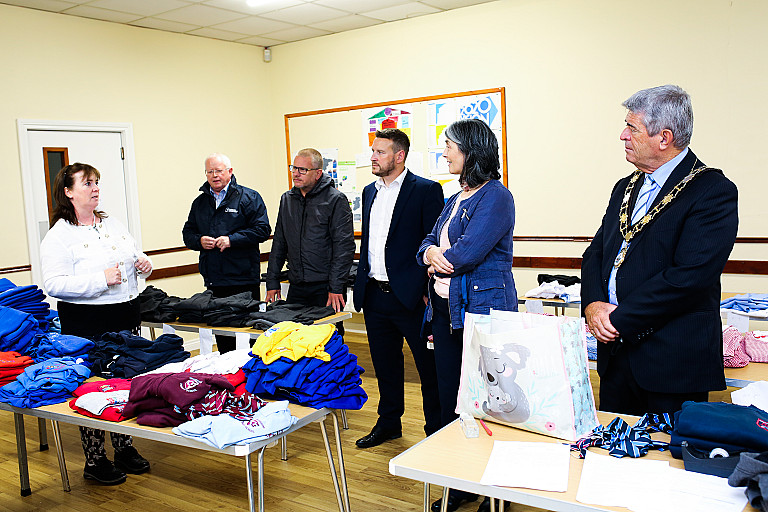 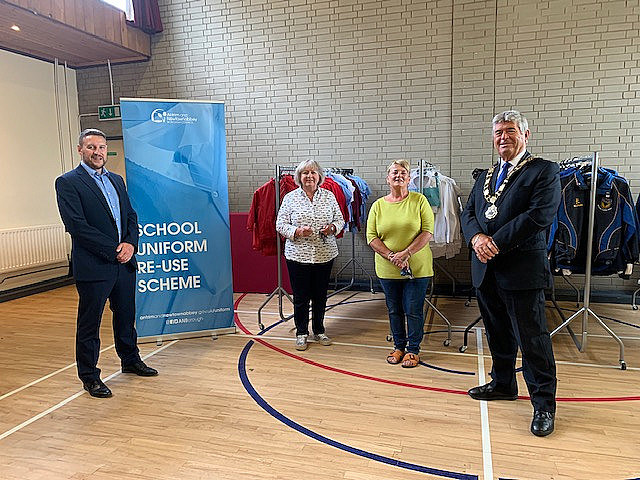 by Antrim and Newtownabbey Borough Council

Antrim and Newtownabbey Borough Council carried out extensive research, initially with local groups and organisations who were already providing this valuable service, and a survey was also carried out to identify best practice.

Local community organisations were invited to engage with the elected members (councillors), taking a strategic lead in terms of supporting and promoting local schemes. Relations were built between the different schemes which enabled the sharing of uniforms across schools.

Some of the challenges faced included the lack of storage, as many community organisations are already using their main halls for daily activities. In addition to this, despite the emphasis on recycling and environmental benefits, there remains a stigma around "free uniforms". This challenge was successfully addressed by one lead partner who introduced a Uniform Sale, charging small amounts for items eg. £2 per item such as shirts and trousers and £5 for blazers. This proved to be a great success with significant numbers of people attending the sale, raising a total of £1400.

Similarly, some re-used uniforms were sold for a small cost in shops, which proved another successful approach. The monies raised went back into supporting local families either through food banks or directly into the school uniform re-use scheme. The feedback was positive with people feeling more comfortable contributing to the costs and giving back. This will be further explored next year to help reduce stigma around reused clothing.

Other unexpected positive outcomes this year, was the large volume of items donated. This allowed us to take a wider Northern Ireland based approach, as it was identified that there was a need for unmarked, plain good quality uniform items to be provided to refugee schemes in Belfast in particular. We were able to donate over 1000 items to the refugee scheme this year.

Additionally some of the "mum and tot" schemes involved in the school uniform re-use project have started their own clothes "swap shop" events.

The Pilot Scheme last year saw over 2200 good quality school uniform items from over 65 schools donated into schemes. This year, 2021 we were able to increase from 7 school uniform re-use schemes to 11 schemes covering the whole of Antrim and Newtownabbey Borough Council area, and the number of School Uniform items donated increased significantly to over 5000 items from over 70 schools.

The school uniform reuse scheme has been very successful this year and will hopefully continue to grow. The elements of storage, volunteer time and charges being applied are all challenges going forward. In response to challenges this year in particular, many schemes have opted to remain open to support families and to incorporate the school uniform re-use scheme into other community events such as coffee mornings and get togethers. The success of this will continue to be monitored.

Waste in the production of school uniforms is vast! There is waste and adverse environmental impacts from every stage of the complex manufacturing process that uses an extraordinary amount of electricity and water. Then after all this, the child grows and a perfectly good uniform could go to waste - often landfill - just because it doesn’t fit that particular child any more. But what if there was a better way?

School uniforms can last a very long time if cared for and laundered using eco-friendly products rather than harsh chemicals and optical brighteners which can fade and strip away the colour and wear them out before their time. If you have a child who has grown out of their uniform, or no longer needs it why not do your bit for the environment and pass on your old uniform, and come to a community school uniform swap to find a new one for this year?

Any family can avail of the scheme. The scheme is NOT means tested. This means that you don’t need to “qualify” or provide proof of income.
In fact, you are contributing to recycling by using the scheme. If a scheme is over-stocked (which is often the case) these uniforms may go to waste. It is much better that these items are collected and re-used by families.

Whatever uniforms are donated by people living in your area are available for re-use! This should cover all common schools in your area and potentially other less common ones. If your child needs a different, less common uniform for your area, then one of the other exchanges will be almost certain to have items.

Number of people and community organisations participating in the scheme.
Number of school uniforms donated and collected.
Number of families who are supported through the scheme.
Read more
Share this initiative
Inspired? Find out more

Canterbury BID is a not-for-profit, business-led, and business-funded partnership that supports over 600 businesses across the city centre, supporting net-zero targets, growing sustainability knowledge, and building a climate action strategy.

Cambridge Marketing College is a training provider in marketing and PR, influencing opinions on climate change and the environment and helping people to think more sustainably.

A marketing and communications studio focused on sustainability, helping green businesses to tell their stories in more powerful ways.

TreOffice is reducing power consumption and minimising waste in the office equipment sector.