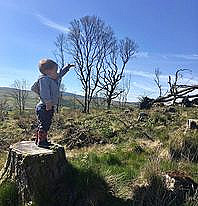 Child surveying the land after clear fell & before our planting 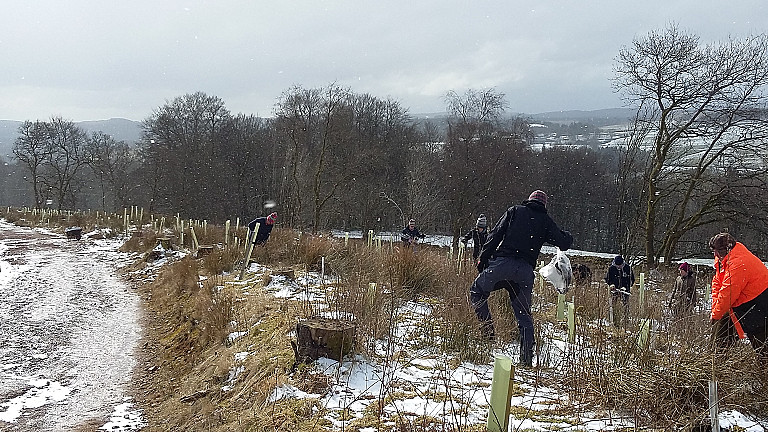 Volunteers planting in the snow 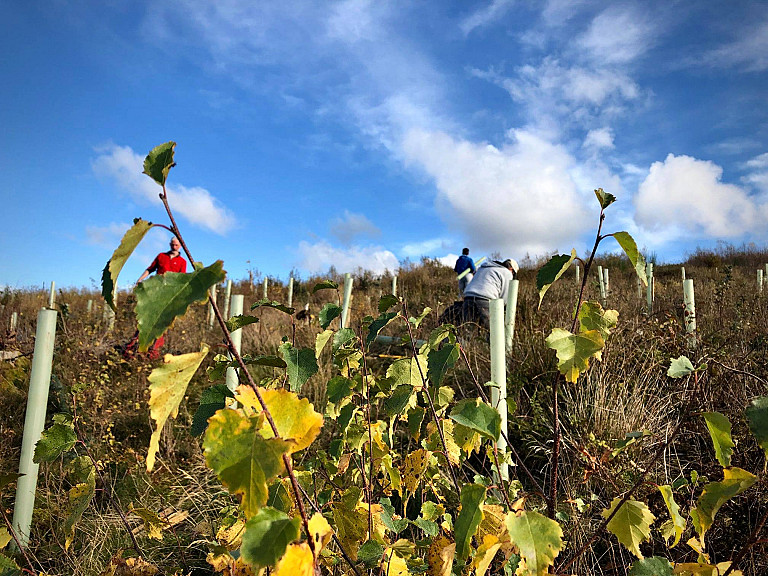 Our project is to create and maintain a mixed broadleaf community woodland at Gallow Hill (overlooking the town of Moffat), on the site of a former commercial conifer plantation that was clear-felled by the previous owner in 2014. The felling resulted in disruption in the town by lorries taking away the timber. The owners offered the land to the community, and a small group of people called public meetings to discuss the possibilities for managing the site in a way that would be more beneficial to the community. Key aims were to avoid future clear-felling, improve the visual environment, involve the community and increase biodiversity. Plans were developed for mixed broadleaf planting, limited and sympathetic amenity development, community engagement, and involvement of volunteers in a community run local charity.

After purchase in 2016, with the assistance of a major grant from the Scottish Land Fund, we appointed two project officers to develop and implement our plans. This resulted firstly in a community engagement plan which prioritised amenity developments that were to be minimal and sympathetic to the woodland - natural play equipment, seating and picnic benches, an outdoor classroom / shelter and cycle trails. Secondly, it created a planting plan that was agreed with Forestry Commission Scotland and formed the basis for future funding bids.

Since 2017 we have largely implemented both plans - planting will be completed in the New Year and we have been able to put in place picnic tables, seats, an outdoor classroom / shelter and natural play equipment.
Our plans are resulting in a lighter, less oppressive visual environment; greater biodiversity is already evident in both flora and fauna; we have a stable and sustainable charitable organisation based in the local community; and we have a strong volunteer base helping us to implement planting and maintenance plans - over 100 people have been involved in the last four years and we regularly have 12 - 15 volunteers at one of our monthly sessions.

We have achieved all this with the support of many people in the community, but we have also worked successfully with funders and local organisations. Funders have included Scottish Land Fund, SSE, Tesco, the Co-op, Dumfries and Galloway Council and the National Lottery. We forged a successful partnership with Carbon Footprint Ltd, who act as brokers for carbon offset payments and delivered us around 16,000 trees and tree protection products. Locally, we have shared tools, volunteers and expertise with other groups including Borders Forest Trust, two nature reserves and Space to Grow, Moffat.

We put a lot of time and effort into planning and preparation, and have always tried to engage positively with people in the local community. We carried out a feasibility study prior to the land purchase, which included engagement with key stakeholders and a community consultation. This identified potential problems and benefits. We had good support from the Scottish Land Fund who were primary funders of the land acquisition.

We undertook a more detailed community engagement programme after purchase, which identified amenities that people wanted to see on the land - and what they didn't! We recruited volunteers mainly through social media and word of mouth. We needed further funding to create the woodland and facilities - we had some early successes with funding applications, a barren couple of years and a final flourish. It wasn't easy!

Challenges overcome were twofold - social media management to deal with vexatious opposition from a few individuals using false accounts and (connected to this) a poor recruitment choice of one project officer. After they were let go, they engaged in a campaign of vile criminal harassment for which they were eventually fined. All this set us back a couple of years because of the drain of our energy, misdirected focus and toll on our mental health.

Looking back, although our experience was a little extreme, we would have introduced clear guidelines for managing social media from the start. Although difficult for a community project, we should also have dealt more robustly and quickly with those few people who were intent on causing problems.