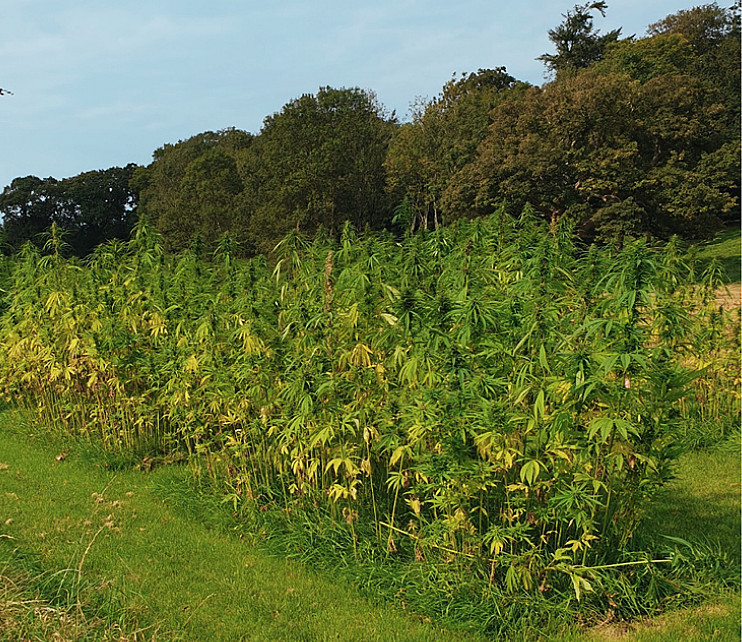 One of the hemp fields 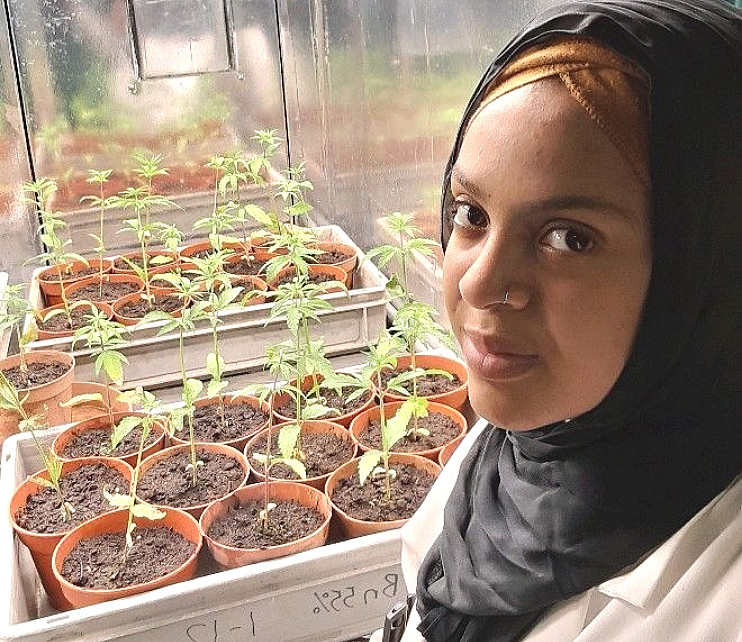 The hemp plant is one of the best natural converters of CO2 to biomass that we have available to us to tackle climate change. Estimates suggest that hemp can capture four times more carbon dioxide from the atmosphere than trees. Its deep roots and rapid growth enables hemp to store considerable amounts of CO2. Hemp requires very low inputs to grow, needing relatively small amounts of fertiliser and water, and it is great at enriching biodiversity amongst pollinators, including the European honeybee, by offering a source of pollen later in the year.

Industrial hemp refers to varieties of Cannabis sativa L. cultivated at large scale, typically for seed and fibre production. Unlike other varieties of Cannabis, hemp accumulates higher amounts of non-psychotropic cannabinoids, such as CBDA and CBD. Industrial hemp can be grown legally in the UK with an industrial hemp license, however, harvesting the flowers and leaves, in which the cannabinoids are most abundant, is still prohibited under the terms of the licence and cannot be removed from the field.

Harvesting and further processing each part of the hemp plant ensures the carbon is captured and converted into useful products. Every part of the hemp plant has the potential for use. It is an extremely versatile plant and manufacturers are increasingly utilising it in products as they look for greener alternatives to please eco-conscious consumers. For example, hemp is an excellent and sustainable substitute for non-organic cotton, as it uses much less water, and blends well with other sustainable fibres. It also features in many health, well-being, and beauty products as a rich source of fatty acids. It can also be used as a construction material and insulation. Even biodegradable hemp biocomposites are also becoming increasingly popular and have been used in BMW car models.

It is encouraging to see hemp being used in so many ways. However, current UK hemp regulations limit cultivation, resulting in much of the hemp used in the UK being imported. If we could continue research and support to significantly increase the number of farmers cultivating hemp each year, we could see some impressive carbon reduction figures for Wales and a boom in local sustainable materials to support local businesses and communities.

My PhD aims to assess the performance of hemp cultivation in Wales, as a source of therapeutic compounds, sustainable raw materials, and its carbon capture potential. The title of my project – The Valorisation of Industrial Hemp Waste – aims to raise awareness of the many benefits that the industrial hemp plant can offer in its entirety as a multipurpose feedstock, in the hope of encouraging greater utilisation this crop. This will help us to better tackle the climate change crisis and create a more circular economy for Wales, reducing waste and providing more sustainable solutions for industry and consumers alike.

If you want to work or study in the hemp industry, it’s important to firstly understand the plant and keep up with current regulations. The university has been granted industrial hemp and controlled drugs licenses to permit the cultivation of hemp varieties in the fields and in greenhouses. To develop testing methods, it’s also beneficial to have a knowledge of analytical chemistry and instrumentation.

Most of all, you need a passion. I earned a master’s in chemical engineering but did not have ambitions to enter the oil and gas industry. Instead, I became fascinated with sustainable technologies, and I found out about hemp shortly after I graduated. I wanted to improve access to scientific research and data around hemp as it has the potential to benefit so many people, as well as our planet. This PhD offered me an exciting opportunity to do that which I do not take for granted.

If you feel passionately about a research topic, especially one that has the power to tackle climate change, my advice is to pursue it.

My PhD project is the first hemp project at Aberystwyth University and so much of our work has been to establish testing and cultivation methods, but we are collecting some interesting data about the changes in cannabinoid content throughout the growth of several varieties of hemp and yields of the raw materials to help assess the crop’s carbon capture potential.
Read more
Share this initiative
Inspired? Find out more