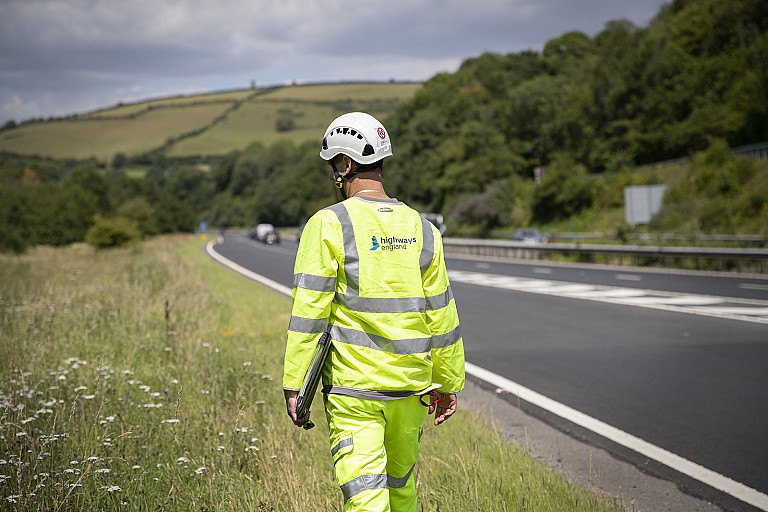 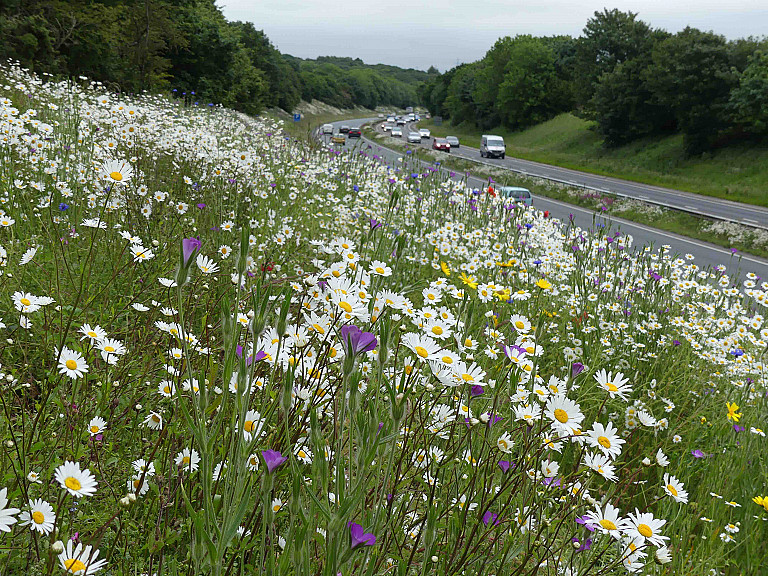 In late 2020 at Highways England we launched a new policy to support greater biodiversity on our road network. The policy removes topsoil from the design of new grassland areas created through our work.

Why did we do this? Topsoil is very dense in organic matter and nutrients which help plants establish and grow vigorously. However, plants that thrive in these environments are typically brutes and bullies. They grow very quickly and form large, lush areas of vegetation which crowd out other less vigorous plant species. Think of plants such as nettles, brambles and perennial rye grasses, all of which have their own ecological value, but can quickly become dominant and require intensive management to control.

When topsoil is removed, and grassland areas are left as either subsoil or bare substrate, nutrient levels drop off dramatically. These lower nutrient environments take the vigour out of competitive, coarse grasses and ‘weed’ species, reducing growth rates, and open the grassland sward for increased germination of more delicate species. Our native wildflowers thrive in these conditions as they have space to germinate, room to grow and there is reduced competition. This leads to an increase in the number of different plant species the grassland supports, improving biodiversity. Keep in mind that species will need to be introduced by using seed if there is no local seed source for natural colonisation, and due to the harsh environments created by this method, they will need to be species able to grow in the geology of the area.

Maintenance of these spaces needs to be designed with soil nutrients in mind, making sure to maintain low nutrient levels within the plots into the future. The easiest way to do this is to take away grass cuttings and dispose of them offsite. Removing the cuttings from the site prevents them from rotting down into the grassland and therefore removes nutrients from the grassland system. As well as the biodiversity opportunities, lower nutrient environments also result in physically less vegetation to manage annually as the soil can support less. This means areas can be cut less, providing financial and carbon savings, as well as reducing the number of workers on the road, improving safety.

This approach can be used whenever subsoil or substrate is exposed during construction, not just on highways works. It is a real opportunity to benefit biodiversity and could be considered in all developments, even in private gardens.

We are rolling out this approach across our Major Projects, before extending it to all our activities and schemes. We have been undertaking grassland improvement schemes on existing verges and have created approximately 260ha of species rich grassland between 2015-20. Examples of these works include the award- winning A38 grassland improvements and Highways England contribution to GetCumbriaBuzzing. We are continuing to deliver biodiversity improvements between 2020-25.

Thinking about soil nutrient levels early in designing new landscapes can lead to large biodiversity benefits while saving maintenance costs, carbon and improved safety.
If this approach is chosen to establish a species rich grassland, it needs to be thought about early in the design process, as topsoil generated from the scheme needs to be managed.
Soil nutrients are one of the most important factors when assessing the potential to establish grassland biodiversity.
Seeding of low nutrient areas needs to be conscience of the geology you are sowing on to ensure delivery.