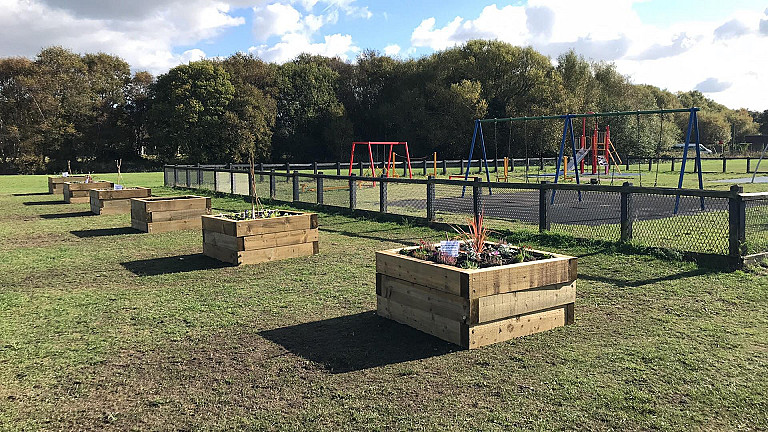 Planters constructed by the community in Devonshire Road park. 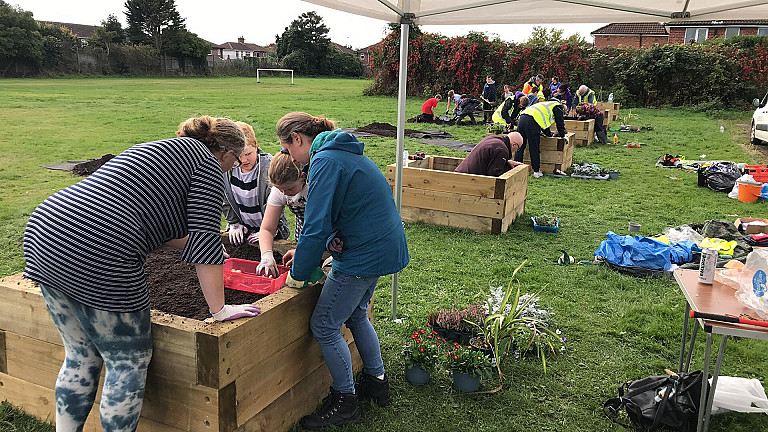 Overwhelming support from the community to construct planters on site.

High Park in Southport is in the top 10% deprived areas in the country with poor health and life opportunities for local residents. Within High Park there are three underused green spaces. The aim of this project was to encourage the positive and sustainable use of these spaces with community involvement. The areas parks were predominantly used either as football pitches or children’s play areas, with little to interest older residents or those interested in environmental sustainability. There was little in the way of flowering trees, plants and planters in the park spaces and, when surveyed, residents felt that introducing these would have a positive effect on not only biodiversity, but health and wellbeing through increased usage of the park spaces.

The funding received through the Liverpool City Region Community Environment Fund allowed us to fund this sustainable project for the local community to help develop and promote their area. To ensure sustainability, the project is supported by staff from Brighter Living Partnership’s High Park: Think Family, Think Community project, a five-year National Lottery funded project ending in 2024.

The Liverpool City Region Community Environment Fund allowed us a meaningful stimulus to kick start more interest in the local parks. Without this funding, the cost of purchasing adult trees would have been too prohibitive for smaller community groups. Purchasing older trees rather than whips has provided a much more meaningful and visible change to the park which was vital to foster community interest area-wide.

During this project we worked with a number of key partners such as the Green Sefton's Natural Alternatives, Grounds Maintenance and Tree teams, Mersey Forest and local councillors to effectively guide the intervention in the area.

However, in order to foster community ownership and engagement of the area's public spaces, it was necessary to support the formation of a 'Friends of High Park Green Spaces' community group. This allowed local residents to lead on and manage aspects of the project including procurement of appropriate materials from local sources and the overall planning and design of the intervention.

This was further exemplified by the engagement of young people in the area who were readily involved in planting and maintaining the spaces throughout the duration of the project. We feel this aided towards challenging negative perceptions of local residents (both of themselves and externally) in their capacity to enact positive change within their community.

As such, we feel that any intervention in a public green space should heavily involve local resident support in both the planning and design process.

Number of trees and flowers planted in a given area.
Number of planters installed with the help of local residents.
Number of people whose sense of wellbeing was raised as a result of the intervention in their community.
Read more
Share this initiative
Inspired? Find out more